After more than two years of dialogue over ending the armed conflict between the FARC-EP revolutionaries and the Colombian government, an important decision occurred that may lead to ending the fighting while establishing a legal framework for social justice.

On Wednesday, Sept. 23, for the first time, the leader of the FARC-EP insurgency, Cmdr. Timoleón “Timoshenko” Jiménez, and the president of Colombia, Juan Manuel Santos, met in Havana, Cuba, to announce an agreement to create a Special Jurisdiction for Peace (JEP).

The JEP’s importance is that it provides the legal framework to prosecute those involved either directly or indirectly in the armed conflict, who may have committed crimes, so that they do not go unpunished. Above all, it allows prosecution for the crimes committed by state forces and paramilitaries. Impunity is what has so far allowed state and paramilitary forces to rape and murder the population, especially the Indigenous and African descendants, human rights activists, trade unionists, students and all those who struggle for social justice in Colombia.

An example of impunity could be the Justice and Peace Law established under the former Álvaro Uribe government allegedly to demobilize paramilitary groups. In a recent interview in the Colombian periodical Anncol, Enrique Santiago Romero, counsel for the FARC in these peace talks, said that ten years of legal proceedings have produced only 10 convictions involving 150 paramilitaries. This is from a total of over 33,000 “demobilized” paramilitary troops. In addition, “demobilization” has really meant only changing a name. Instead of the paramilitaries operating as the United Self-defense of Colombia (AUC), they resurfaced under the name Black Eagles and others. Threats and killings by paramilitary forces continue.

According to Santiago Romero, there can be no final agreement for peace unless the paramilitaries are eradicated.

This JEP can be seen as a victory for the insurgency. In 2012, the Santos government had unilaterally imposed a Transitional Justice Act, where most prosecutions aimed to punish the revolutionaries. The FARC never accepted this law since it was conceived completely by the Santos government without any intervention of the insurgency, even though it was done during peace dialogues. In addition, the law ignored the crimes committed by the state and the paramilitaries.

Here it should be noted that a report of the International Criminal Court in Colombia in November 2012 found that the greatest killers in the armed conflict were state agents and paramilitaries.

At a press conference following the signing of the accord on Sept. 23, Cmdr. “Timoshenko” addressed his compatriots and all friends of peace in Colombia. He said: “Today I bring you, in addition to our fraternal embrace, a part of our collective victory. With the invaluable assistance of the legal subcommittee, we managed to remove many of the obstacles that made the path toward our reconciliation more difficult. We have a Special Jurisdiction for Peace, which besides ensuring respect for the rights of victims, will be dynamic factor in the signing of new agreements in this crucial stretch to reach the end of the conflict.” 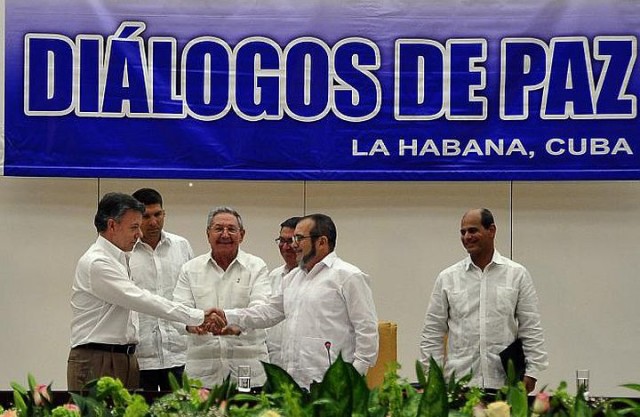 In a press conference attended by the host of the peace talks, Cuban President Raúl Castro, and representatives of the accompanying countries, the joint communiqué of the FARC and the Colombian government on the agreement was read. In it, both parties reaffirmed their commitment to the preliminary agreements reached so far. These agreements are titled “Towards a New Country Colombia: Integrated Rural Reform,” “Political Participation: Democratic Opening for Building Peace” and “Solution to the Problem of Illegal Drugs.”

The communiqué explains the main points of the JEP that, in short, is looking for “a formula of justice that defends the rights of victims and contributes to building a stable and lasting peace.” For this, a “comprehensive system of truth, justice, reparation and non-repetition” should be put in motion following the creation of a Commission for the Clarification of Truth, Coexistence and Non-Repetition.

The agreement creates justice chambers for peace and a tribunal for peace composed mainly of Colombian judges, with the goal of “ending impunity, arriving at the truth, contributing to reparations for the victims and prosecuting and imposing punishments on those responsible for serious crimes committed during the armed conflict, particularly the most serious and representative crimes, and ensuring non-repetition.” (Telesurtv.net)

According to International Humanitarian Law regarding armed conflicts, “the Colombian State shall grant the broadest possible amnesty for political and related crimes.” This would imply that the “crimes” of the insurgency, which are classified as political, arising from rebellion, would involve a broad amnesty. Furthermore, the statement added that, “in any event offenses defined in national law corresponding to crimes against humanity, genocide or serious war crimes, among other serious crimes, will not be subject to amnesty or pardon.”

The JEP will have two types of procedures, “one for those who acknowledge truth and their responsibility, and one for those who do not or do so late. … It will impose a sentence on the former” and “the latter will face an adversarial trial before the Tribunal. … The sanctions the Tribunal imposes will have as an essential aim satisfying the rights of victims and consolidating peace and should have as their main function repairing damages and applying reparations for the damage caused.”

Those who voluntarily acknowledge their crimes will face lighter penalties leading to compensation for their victims; very serious offenses will incur sentences of five years to a maximum of eight under special conditions. “People who refuse to acknowledge their responsibility for such crimes and who are found guilty will be sentenced to imprisonment (jail) up to 20 years, in ordinary circumstances.”

The statement concludes: “In the case of the FARC-EP, participation in the comprehensive system shall depend on the surrender of weapons, which should start no later than 60 days after the signing of the Final Agreement (which is expected to be accomplished in six months). And the transformation of the FARC-EP into a legal political movement is a shared goal, which will have the full support of the government under the agreed-upon terms.”

According to Santiago Romero, who is well versed in international law, there has been no comprehensive legal framework in any other peace process. While this is certainly a historic agreement, everything will depend on how it is implemented.

This requires, first of all, adequate financing. It also requires the will of the current government and future administrations. It is also essential to reveal the criminal acts committed by the state. On this point, Santiago Romero recalled the case of the military dictatorship in Chile, where the military high command under Pinochet made a pact of silence not to disclose their crimes. This pact lasted until very recently, which meant they were silent for over 40 years.

In this context, we have to keep in mind the past and present criminal role of former President Uribe and his paramilitary allies, which will be difficult for them to easily admit to openly.

The international solidarity community can assist in exposing the crimes of the Colombian government and the U.S. role in promoting militarization and violence in Colombia to benefit major U.S.-based corporations.