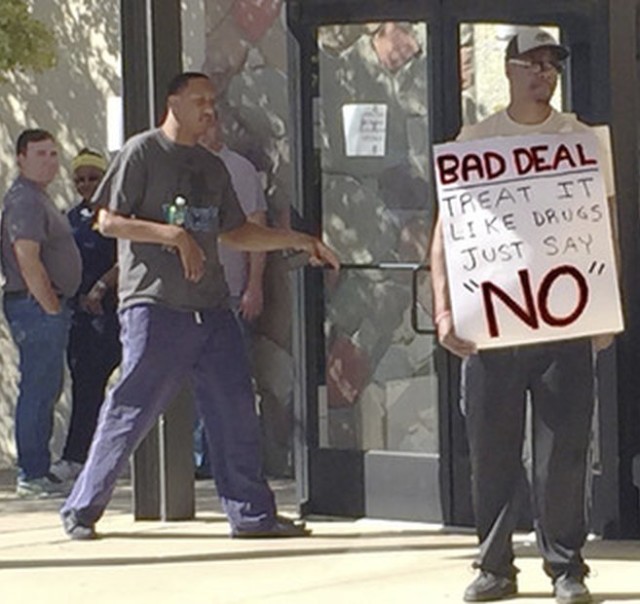 Starting on Sept. 22, UAW members had been voting on a new, four-year contract with FCA. Only one plant local passed the contract, and with over half the membership votes counted, some plants showed a “no” vote higher than 80 percent.

The biggest objection members have to the tentative agreement is that it institutionalizes the divisive two-tier pay system, which created a wide gap between the wages of workers hired after October 2007 and those with more seniority. Rejecting the contract is a sign of strong membership solidarity among the different tiers of workers.

Two-tier, introduced when Ford, General Motors and Chrysler were having cash flow issues in 2007, has come under increasing fire now that the companies are making billions in profits. CEO Sergio Marchionne — who once said UAW members had to get used to “a culture of poverty” — earned $72 million in compensation last year.

While the new contract would give second-tier workers a raise, it takes eight years of service to reach the top pay, and even then there is a $5-per-hour gap between the highest- and lowest-paid workers. The contract creates new, lower-paid tiers in some facilities as well as for temporary workers.

There is widespread outrage over the company’s refusal to implement a 25 percent cap on the number of second-tier workers. When the previous four-year contract was presented in 2011, workers were told that at the end of the four years, a percentage of workers would move up to top pay. Now that the rug has been pulled out from under them, these workers — 22 percent of production workers — are furious.

UAW Vice President Norwood Jewell is justifying this betrayal by claiming that the union had to let FCA eliminate the cap to raise pay for all second-tier workers and give “traditional” workers, whose pay has been frozen for nine years, a raise. In fact the cost of the entire contract package, including the pay raises, comes to about $300 million a year — a fraction of the company’s $3.8 billion in profit last year.

Organizing opposition to the contract has united first- and second-tier workers. A “Contract Lowlights” leaflet, produced by the rank-and-file group Autoworker Caravan, circulated via social media and made its way into plants where AWC has no contacts. After walking out on an “informational” meeting, members of UAW Local 7 at Jefferson North Assembly Plant drove to the UAW’s Detroit headquarters and picketed.

Toledo Jeep workers held a rally outside a contract “roll-out” meeting. One of the signs read, “Vote no to a culture of poverty.” More than 80 percent of the 5,000 workers at this plant rejected the contract. At a parts depot in California, where the contract went down 2-to-1, both first- and second-tier workers wore shirts with a unifying slogan, “Solidarity, No More Tiers, Vote No.”

Besides attacking the union standard of equal work for equal pay, the contract would undermine the eight-hour day. On multiple pages the contract reinforces the despised “Alternative Work Schedule,” which has allowed the company to pay straight time for 10-hour days and Saturdays. AWS puts workers on one of three crews, A, B or C, with B and C working every Saturday as a regular workday. In addition, the C crew rotates back and forth from the evening shift to days every week.

The company gets 120 hours of production every week on the cheap, but the schedule wreaks havoc on a worker’s health and family life. The new contract would give AWS workers time-and-a-quarter on Saturdays, but no reprieve from the schedule.

In the contract summary and at meetings, the UAW leadership has boasted of FCA’s plans to make a $5.3 billion investment in U.S. plants. The details involve a massive retooling and relocating of products. Car production — the Dodge Dart and Chrysler 200, currently built in Belvidere, Ill., and Sterling Heights, Mich. — is exiting the U.S., leaving UAW members with a promise that expanded production of trucks and SUVs alone will be enough to secure jobs. This business plan is environmentally irresponsible and, by gambling that gas prices will stay low, puts jobs at risks. Thus job worries also put the contract’s passage in jeopardy.

During the 2009 bankruptcy in which six plants were closed, many workers accepted buyout packages, shrinking the Chrysler workforce to 26,000. The sales rebound that followed led to a hiring spurt, bringing many African-American youth into the plants. The union, which brags about its civil rights tradition, should be upholding the basic principle of equal pay for equal work for these new members. The UAW must fight to make sure none of these new workers is laid off because of the latest restructuring. That is another message the “no” vote is sending to the leadership.

When UAW International President Dennis Williams said of the contract, “They will ratify it,” he underestimated the rank and file. Now two-thirds of the 40,000 UAW-represented hourly and salaried workers at FCA rejected the contract, a triumph for union solidarity.