In its July 20 issue, the New Yorker magazine published an article headlined “The Really Big One.”

It dealt with one of the underground fault lines in the U.S. that will ultimately cause a really big earthquake.  It was not about the San Andreas Fault, which is one most people know about, especially after the summer blockbuster movie “San Andreas.” 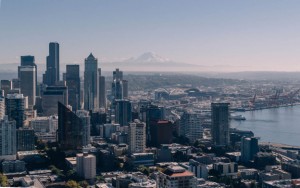 Seattle is 54 miles northwest of Mount Rainier and the fault line called the Cascadia subduction zone.

The article dealt with another fault line just north of the San Andreas, called the Cascadia Subduction Zone. This fault line runs north-south for 700 miles off the Pacific Northwest coast. It starts in northern California and continues alongside the states of Oregon and Washington and ends around Vancouver Island, Canada.

It is called a “subduction zone” because it is a region of Earth where “one tectonic plate is sliding underneath … another. Tectonic plates are those slabs of mantle and crust that … rearrange the earth’s continents and oceans.”

The New Yorker article is quite alarming. It makes a good argument that a major earthquake of epic proportions will surely hit the Pacific Northwest coast within the next 50 years. Actually, it could happen tomorrow. The earthquake will also trigger a massive tsunami, a tidal wave.

The geological record shows that over the past 10,000 years, the average interval between Cascadia earthquakes has been 243 years. The last one was in 1700. Do the math.

Personally, if I lived in the area — if, for example, I were one of the 1.25 million people who live in Seattle, Wash., or Portland, Ore. — I would probably have had a very strong urge to pack my bags and move elsewhere as soon as I finished the New Yorker article.

But more likely, I would start organizing to fight for danger preparedness.

The article is important because it provides the science as to what happens when the Cascadia zone gives way.  The “magnitude of the resulting quake will be somewhere between 8.0 and 8.6,” which is “the big one.”

If the entire zone gives way at once, an event that seismologists call a full-margin rupture, the magnitude will be somewhere between 8.7 and 9.2. That’s “the very big one.”

The article serves to alert the public that when the rupture happens, “that region will suffer the worst natural disaster in the history of North America.”

According to Federal Emergency Management Agency projections, which by any objective measure are vast underestimations, the earthquake and the tsunami will kill about 13,000 people.  Another 30,000 will be injured; a million people will be displaced; and over 2 million will need food and water. Electricity will be out for a long time, maybe for years. Buildings and homes will have collapsed in record numbers and problems of potable water will go on for a very long time afterward.

The article makes the point of comparing the earthquake preparedness in Japan and in this West Coast region.  Japan is one of the most earthquake-prepared countries in the world — yet 18,000 people died in the 2011 Tohoku earthquake. It devastated northeast Japan and led to the meltdown of a major nuclear power plant in Fukushima.

A few years before this disaster, a Japanese geologist had tried to warn the country to prepare for a 9.0 magnitude earthquake.  His alert went unheeded.

The massive December 2004 earthquake off Sumatra, Indonesia, and resultant Indian Ocean tsunami killed nearly 250,000 people. Tsunami warnings did sound in many places, but with densely populated coastal regions and vacationers along thousands of miles of beaches, there was no time to reach safety.

Almost 10 years ago, at the end of August 2005, Hurricane Katrina hit Louisiana.

Remember how people outside the area felt as we watched the horror unfolding on CNN? Remember the racist treatment of Black Louisianans, an earlier example of how Black lives do not matter under this system?  Remember FEMA’s response to the crisis, the toxic housing, the displacement of decades-long residents of Louisiana to other states?  Remember the role of the police in terrorizing rather than protecting the people?

Hurricane Katrina was an example of how the capitalist system is incapable of and unwilling to deal with a major disaster.  There is no concern for the lives of working people. Only profits are an issue.

Scientists have been certain the Cascadia fault was destined to produce a disaster since the late 1980s. What has been done to safeguard the region’s population? Well, the New Yorker’s Kathryn Schulz reports that in Oregon, “It has been illegal since 1995 to build hospitals, schools, firehouses and police stations in the inundation zone.”

That’s it. No new construction of these four types of buildings in one state. Otherwise, it’s a free-for-all.

Under capitalism, the priority is private profit. There is a complete disregard for humanity.

So businesses can create new housing developments, shopping malls, recreation areas and so on if they think there’s money to be made. And this is just what they’ve continued to do.

Builders, the New Yorker reports, are required to merely consult with state geologists, and if they’re told their plan is unsafe, they ignore the advice and proceed to put the masses in harm’s way. Gentrification, after all, means big profits.

At the same time, there’s no centralized disaster-preparedness plan or personnel, certainly nothing of the scope required. Tax breaks for big business take priority over funding to save lives. Wars, invasions and occupations get funded; earthquake safety does not.

Because of this, when the earthquake and tsunami hit, children will die.  The elderly will not be able to get out of the way.  The disabled will have no access to escape.

Some seismologists and journalists have warned the public. But that is not enough.

Is there any other way? Of course there is. If we lived in a socialist society, planning and preparations would take top priority: carefully laid out evacuation routes; block-by-block communication plans; and backup power, water, medical and housing provisions in place for emergency.

What if that’s not enough? What if there are entire communities that should be relocated right now, away from the coast, inland and onto higher ground? What if some beaches should be closed to summer tourism? What if highways and bridges ought to be rerouted?

Under socialism, none of this would be impossible or outlandish. Under capitalism, none of it will happen.
Still, something can be done. Class-conscious revolutionaries — communists — can point out that “the very big one,” the biggest disaster of all, is capitalism.  Only organizing the necessary mass movement to fight for money for disaster preparedness — not for war or Wall Street — will resolve this looming crisis.