On July 31, armed police and private security guards carrying semiautomatic weapons attacked Liberty Township, a tent city set up by dozens of protesters in Chișinău, Moldova, outside the home of wealthy oligarch and political kingmaker Vladimir Plahotniuc. The private security forces were especially brutal, and many people were injured. Several activists were arrested. 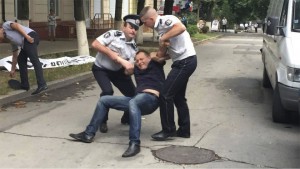 Protest organizers have called for revoking the licenses of private security firms Argus S and GSS and for the resignation of Interior Minister Oleg Balan, who praised the police action. (Grenada.md, Aug. 4)

The tent city, which included whole families, had been set up July 24 to protest steep price hikes for electricity and natural gas — austerity measures backed by Plahotniuc and the ruling “Alliance for European Integration.” Protests also spread to other towns and villages in the former Soviet republic of 3.5 million people, which is sandwiched between Ukraine and Romania.

Moldova’s currency has sharply depreciated in recent years, causing hardship for poor and working people, as pro-Western politicians cut off trade with Russia. While most Moldovan oligarchs have their money invested outside the country, agricultural and manufacturing workers dependent on the Russian market were hit especially hard.

As in neighboring Ukraine, Chișinău’s right-wing government seeks to sell off the country’s resources and impoverish workers and farmers in a bid to join the European Union and the U.S.-led NATO military alliance. Moldovan authorities have also shown a growing willingness to repress any signs of dissent.

During 2014’s parliamentary election campaign, and faced with the possibility of a left-wing, anti-EU majority, the governing right-wing alliance and oligarch-dominated media took a page from their Kiev allies’ playbook, labelling any and all opposition as “Russian agents.”

Two young anti-fascist leaders, Pavel Grygorchuk and Mikhail Amberg, were arrested in November and held for six months as political prisoners, first in jail and then under house arrest. Grygorchuk is editor of the communist website Grenada.md, and both activists are leaders of the Red Bloc Party founded in May.

The witch-hunt continues today. Vlad Filat, chair of the Liberal Democratic Party, part of the government coalition, took to the airwaves to condemn the rate-hike protesters as “destabilizing the situation in the country.”

“Early elections – this is the clear goal of the protests. They want to stop our European path,” Filat charged. (Publika.md, Aug. 3)

Website Publika.md, controlled by oligarch Plahotniuc, published a scare-mongering editorial against Liberty Township organizer and Red Bloc Party chairperson Grigory Petrenko on Aug. 5, as well as other articles implying that the protests are “coordinated by external forces” — code words for Russia.

After a local appeals court ruled July 31 in favor of Plahotniuc’s demand to dismantle the tent city, cops and security guards moved in immediately, violating the rights of protesters who had planned to appeal the case to the country’s Supreme Court.

When activists attempted to regroup outside Plahotniuc’s mansion on Aug. 1, they were met by a violent right-wing mob, which organizers say included private security forces out of uniform. Such tactics echo the rise of fascist groups in Ukraine. (Omega Media Group, Aug. 1)

Daily protests are being held outside the ANRE headquarters in Chișinău, where six hundred petitions against the utility rate hikes were gathered in a single day. Among the popular slogans are “Down with the thieves in Parliament” and “Jail Plahotniuc!” (Omega Media Group, July 27)

“We believe the tariff increase is unreasonable,” one protester told Omega. “We have nothing more to pay for gas and electricity. We also want to live like human beings.” Protests have continued since the repression in Chișinău and spread across the country.

In response to the growing protest movement, the government was forced to take a step back on Aug. 5, when a meeting of the Supreme Security Council decided to make “categorical recommendations” for revision of the tariff on natural gas, Grenada reports. Activist Pavel Grygorchuk cautioned that this was meant to soothe public discontent while the regime prepares repression against protest leaders.

“We are not going to stop,” Red Bloc leader Grigory Petrenko said at a news conference. “Our protests will continue. (Grenada.md, Aug. 3)