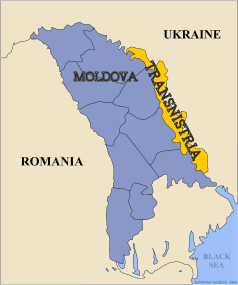 Editor’s note: Transnistria is an independent republic that broke away from Moldova following the collapse of the Soviet Union. It maintains many of the traditions of Soviet times, including the hammer and sickle flag. The right-wing junta in Ukraine, backed by Washington, has threatened military action against Russian peacekeepers in Transnitria and has been building up forces in neighboring Odessa. This Aug. 6 statement by the Central Committee of the Transnistrian Communist Party was translated by Workers World contributing editor Greg Butterfield.

The policy of the authorities of the Republic of Moldova continues to amaze with its inconsistency.

Just a few days after the formation of the new Parliamentary coalition with the hackneyed, but nevertheless pretentious name “Alliance for European Integration,” the repressive state machine of the RM showed the price of its declared “European values.”

On July 31, police armed with guns and “enhanced” by soldiers of private security companies destroyed the “Liberty Township” tent city in the center of Chișinău, where a group of civic activists protested against the steep rise in the price of public utilities tariffs in the country. The harsh attack was greatly revealing — using brute physical force toward peaceful protesters.

Adding another dimension of ambiguity to this situation, on the day of the dispersal of “Liberty Township,” the Prime Minister of Moldova, speaking on television, actually recognized the fair demands of the protesters, pointing to the groundlessness of the increase in gas tariffs.

Thus, the actions of the police and mercenaries of the oligarchs can be regarded only as an attempt by the authorities to intimidate dissatisfied people. The next attempt by peaceful activists to draw the attention of the anti-people government to Moldovan society’s problems could end up, presumably, with protesters “who burned themselves,” as has happened in “pro-European” Ukraine. [Translator’s note: This refers to the May 2, 2014, massacre of anti-fascist protesters by neo-Nazis at the Odessa House of Trade Unions. Kiev authorities subsequently claimed the victims were responsible.]

Noteworthy by their conspicuous silence are the principal “beacons of democracy” — the ambassadors of the United States and the EU member states, as well as representatives of numerous European institutions in Moldova. What happened in the center of Chișinău was a gross violation of fundamental freedoms of individuals and citizens, which they all chose to overlook, revealing at the same time one of the principal features of the modern colonial system, where the infamous “human rights” promoted by America and Europe do not mean the same thing in, for example, Moldova or Ukraine.

All of this once again convinces Transnistrian society of the correctness of the choice made 25 years ago to build their own state. As in 1990, Transnistrians have no confidence in the “pro-European” politicians from Chișinău, whose level of hypocrisy is even greater than that of their Western masters.

The Transnistrian Communist Party expresses its abhorrence of the treacherous dispersal of peaceful protests and harassment of opposition activists in Moldova. We demand an end to the “witch-hunt” that has flared up with renewed vigor! We call on the authorities in Chișinău to abandon the policy of double standards, at least in relation to their professed “European values”!