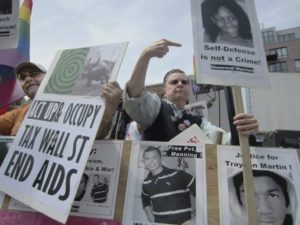 The SMA, begun in 1974 in Chicago as a Lesbian library, emphasizes “social and economic justice struggles, People of Color LGBTQ lives and experiences, and LGBTQ involvement in movements from the Gay Berlin homosexual movement in the 1800s to the Abolitionist and Women’s Suffrage movements in the U.S., to anti-war movements, the AIDS movement, Black Civil Rights movement, Labor movement, Feminist movement, Trans* movement, and more.”

Ben Power Alwin: We believe every act of Queer archival preservation is Queer activism and rebellion. The predominant culture’s oppression of LGBTQ peoples is carried out by erasure of our history, literature and art. This silencing of the truth about our Queer lives and experiences allows a huge gap in knowledge, then filled with ignorant lies and stereotypes.

WW: What sparked you to do Trans* and anti-racist activism through archiving?

BPA: In my abusive home in Chicago, my uncle’s attic bedroom, where he kept hundreds of books in his own library, was my only refuge. Then in 1966, when I was 16, the Black Civil Rights movement became the first social justice movement in my life. I identified with the suffering of other minorities — I knew I was different, too. I went to the 1968 Democratic National Convention in Chicago to protest in Grant Park against racism and the war in Vietnam. Cops started to riot, teargassing, billy clubs cracking skulls. After that, I reflected on ways to be an activist and survive physically, without getting jailed, because I thought then I wouldn’t be of use.

In 1975, working in the Lesbian Feminist Center on Halstead [in Chicago], I met J.R. Roberts, an anti-racist white woman compiling the first — and still only — bibliographic guide to the history of Black Lesbians. She founded there the New Alexandria Lesbian Library, and emphasized how saving materials about Lesbian lives was survival in a patriarchal world. This connected deeply to surrounding myself with books as part of my survival.

I decided archiving would be my primary activism. When the LFC closed, I moved the collection into my Chicago apartment, then to Northampton.

I continue to be a street activist, but my most lasting activism is this quiet, radical archival remedy to oppression. We LGBTQ people have a right to our own history books, literature, music, art — our own lives. This is archival justice.

WW: What are some ways the SMA is used for activism?

BPA: We provide space for support groups — the East Coast FTM [female-to-male] Group met at the SMA for over 20 years, LGBTQ youth groups visit. People use the SMA to create presentations about our lives, and take those into the community as direct education about suppressed history. We hope to work with curriculum developers for school systems.

WW: As a dedicated white anti-racist, do you have thoughts to share with Trans* and Queer activists on the importance of the #BlackLivesMatter movement?

BPA: We are living in a historic moment of fightback against centuries of U.S. racism. Queer Women of Color started the Black Lives Matter movement. It is part of the LGBTQ community. I don’t see how as Queer people we can separate ourselves from it. Particularly white Queer activists — this is an opportunity for us to use any white privilege we have, or any energy from that, and channel it into BLM as allies to People of Color. Get involved in Black Lives Matter!

WW: You and the SMA recently faced eviction from your home of 32 years. What prejudices and economic pressures were behind that?

BPA: Increasing gentrification in Northampton has resulted in the greed of soaring housing prices. That, combined with the landlord’s refusal to sell the Archives House to me, a Transman, forced the SMA out of its long-term home.

We are relocating to a beautiful “Pink Lady” Victorian house in Holyoke, Mass., a primarily working-class city that is majority People of Color, over 48 percent Latino/a, and majority female, over 53 percent, along with a dynamically growing LGBTQ population.

In the spirit of Leslie Feinberg, Sylvia Rivera

WW: Are you planning new projects related to the new location?

BPA: The SMA will shortly house a free LGBTQ lending library, Out Books On Wheels, with 3,000 volumes it delivers to LGBTQ people of all ages — at homes, community centers, hospitals and senior centers locally.

The Sylvia Rivera Room will open soon, named for the late Transgender civil rights pioneer and veteran of the 1969 Stonewall Rebellion. The SMA wants this room to be particularly welcoming to the local Latino/a community. We’ve already had a visit from House of Colors, a majority Latino/a and African-American LGBTQ youth group, wanting to study there.

Shortly before hir death, Trans* activist and author Leslie Feinberg donated hir personal research library to the SMA, to show support of community-based archives and libraries. Those 1,000 books — about sexes, gender expressions and sexualities within the context of nationality and class — join the other 12,000 SMA books.

Accessible to the public, the Feinberg Library will give researchers and community scholars a unique look into Leslie’s intersectional thinking and development as a social justice activist and author.

Both Leslie and Sylvia fought hard for the inclusion and liberation of Transgender people, People of Color, and low-income people. At the SMA, we work in the spirit of Leslie and Sylvia whenever we prioritize the histories, literature and art of Queer and Transgender People of Color, who face not only the most severe discrimination, but also whose stories are typically omitted or erased within institutional archives and historical societies.

WW: How can people support the SMA?

BPA: We encourage people to contribute archival materials; work in the SMA as a researcher, community volunteer or student intern; or donate to the SMA’s nonprofit organization, the Sexual Minorities Educational Foundation.

Visit us at our new home.

Contact us at [email protected] or find us on Facebook by entering “Sexual Minorities Archives.” Become part of the leadership by joining the SMEF Board of Directors. We extend a warm welcome to People of Color LGBTQs to join us!