By a foreign resident in Santo Domingo, Dominican Republic 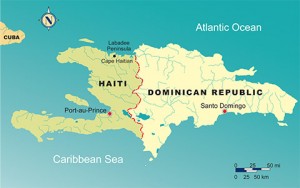 Another human tragedy against the Haitian people is in the making as officials in the Dominican Republic prepare to deport tens of thousands, if not hundreds of thousands, of Haitians. Families are being ripped apart as Haitian workers are expelled.

For the past year, the government of President Danilo Medina of the Dominican Liberation Party and conservative political forces have been whipping up a campaign of hysteria against Haitian workers in the DR.

Haitians in the DR are largely employed in public and private construction (80 percent of the labor force in construction), in agriculture (95 percent of the workforce in agriculture) and in domestic services. They are often paid off the books and receive the lowest of wages while employers avoid paying the monetary deductions required for medical care, pensions and other protections.

For example, Haitian construction workers can be paid 450 pesos per day or less. They work from 7 a.m. to 7:30 p.m. At current exchange rates, this converts to 83 U.S. cents per hour.

Some businessmen call immigration agents at the end of a pay period and have their workers deported, so as to avoid paying Haitian workers any salary at all.

Minister of the Interior and Police José Fadul has announced repeatedly that soldiers and immigration agents will conduct deportations of Haitians after June 17, when all foreigners were required to register under the Foreigner Regularization Plan.

Additionally, another 209,912 Dominicans of Haitian descent face deportation. These Dominicans were born in the DR and have lived and worked here for decades, since before a new Constitution was established in 2010 by the capitalist politicians. It consciously redefined Dominican citizenship so as to exclude persons of Haitian descent.

According to Fadul, only 4,600 immigrants have “completed” the required documents of the Regularization Plan — less than 2 percent of the applicants, who now have 45 days to complete their registration. If the remaining 98 percent of the applicants do not fulfill the requirements of the Regularization Plan, they too face deportation.

Requirements of the Regularization Plan include passports, birth certificates, identity cards, proof of employment (wage receipts or letters from employers), apartment/home rental leases, letters from neighborhood associations, bank accounts, credit cards, vehicle registration papers, receipts for personal property, and so on — unobtainable requirements for a poor, impoverished population that is subjected to constant discrimination and superexploitation.

Fadul has publicly admitted that business people have refused to issue certificates to their Haitian employees, which means that the majority of Haitians face deportation even if they have applied for regularization.

Another barrier is the cost of obtaining notarized documents — 500 pesos or more per document, or a whole day’s pay. Lawyers charge 10,000 pesos or more — one month’s salary — to help process the applications. Some applicants have had to make up to 10 visits to the offices of the Registration Plan and wait in line from sunrise to sundown, surrounded by riot police they often have to bribe in order to be permitted to register.

How can undocumented workers and their families afford all these accumulated costs? They can’t. The Registration Plan is a calculated long-term strategy to deport Haitians and to steer the attention of the other people in the Dominican Republic against Haitians, falsely blaming them for the ongoing poverty in the DR.

Fadul repeats every week that thousands of military troops have been mobilized, readied and assigned to immigration authorities, that buses have been purchased and provided (pictures of the buses appearing in the press) to implement the impending deportations. Military installations such as Fort Beller in Dajabón and others are being readied as detention centers.

According to Fadul, Haitian deportees will be taken to Haiti through four border points: Dajabón, Jimaní, Pedernales and Elías Piña, where Haitian authorities will receive them.

Under daily psychological pressure, intimidation by Dominican authorities and violent racist attacks, thousands of Haitians have already left in fear of being deported and losing their personal belongings. Immigration police continue detaining and deporting at will, separating families that have lived here for decades. Many adults expelled are facing permanent separation from their children.

This April, it was alleged that Haitians had murdered a Dominican youth in the city of Moca. As a consequence of the anti-Haitian hysteria, mobs of Dominican youth attacked and expelled 500 Haitians from Moca.

This racist attack was recorded and shown on Dominican television, and is posted on YouTube under the title “Sacan haitianos a la fuerza en Moca y destruyen sus pertenencias” — “Haitians are expelled by force in Moca and their belongings are destroyed.”

The mob attacks in Moca galvanized both racist and anti-racist forces in the DR, propelling many Dominicans to denounce racist mob violence against Haitians on the major TV stations and in the newspapers, and forcing authorities to arrest some of the individuals involved in these attacks.

Another horrendous racist crime that demonstrates the effects of the government campaign against Haitians is the lynching of “Tilile” (Jean Claude Harry), a shoeshine worker with a wife and children. He was lynched in a public park in Santiago in February, his body beaten and his hands and feet bound by rope. Santiago is the second-largest city of the DR.

Even though this atrocity was widely condemned by Dominicans and Haitians, it shows the real threat that Haitians face.

According to the World Bank, “In the last 20 years, the DR has been one of the fastest growing economies in Latin America, with an average GDP growth of around 5.5 percent between 1991 and 2013. Despite this phenomenal economic performance, poverty today is higher than in 2000. Poverty increased from 32 percent of the population in 2000 to nearly 50 percent in 2004, following the financial and economic crisis of 2003, to gradually decline to 41 percent in 2011.”

The World Bank notes that Haitian workers on average earn 60 percent of what Dominicans earn. Haitians in agriculture receive 50 percent of what Dominicans are paid. “Haitian immigration benefits the economy of the Dominican Republic, offering companies a young workforce and relatively low wages,” says the World Bank in its March 30 report “Haiti and Dominican Republic: more than sum of the parts.” Is it any wonder that the bourgeoisie is so happy, with the record profits extracted from both Haitian and Dominican workers?

In the DR the majority of the work force is classified as “informal.” Informal workers are not registered as employees of a company and thus don’t receive medical coverage, pensions or other worker protections.

There is no national minimum wage. In fact, there are 13 different minimum wage scales pertaining to different sectors of the economy: agriculture, construction, small, medium and large commercial enterprises, free trade zones, government employees, etc. Some 65 percent of the working population make less than 10,000 pesos per month ($56 per week) and real unemployment is estimated to be above 20 percent.

If not for the remittances sent by Dominican workers abroad, amounting to $4.6 billion in 2014 (an average of $474 for every person in the DR), these economic conditions would have caused a social explosion.

As can be seen in the current crisis, racism and national oppression not only enslave Haitians but also fortify the oppression of Dominican workers as well, for both are exploited by the same capitalists. What the current juncture needs is for a united struggle of both Dominicans and Haitians to emerge against the capitalist system, which enslaves all the workers. And at this moment of crisis, international solidarity in defense of the Haitian workers in the DR would be very timely and helpful.