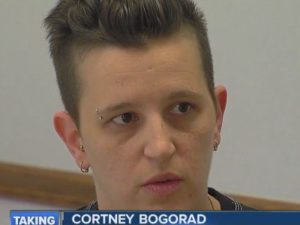 We are taught, beginning in elementary school, that our rights are protected by the Constitution. Freedom of expression is one of these rights. Or are there exceptions? Can a person be legally dragged out of a restroom and physically removed from a public place because of gender expression or how they look?

Cortney Bogorad doesn’t think so and she has filed a lawsuit. In January, she ate dinner at Fishbones, a popular restaurant near a casino in the trendy Greektown neighborhood. Bogorad identifies as female and does not consider herself transgender, but some misogynistic, anti-lesbian/gay/bisexual/transgender/queer bigot tagged her as male apparently because of her clothing and hairstyle.

While attempting to use the restroom after eating, Bogorad heard a man call out, “Whatever man is in the restroom come out now.” Before she could even find out what was happening, a male security guard barged into the women’s restroom, shouting at her to come out if she was a man. She stated that she was a woman but the guard refused to look at her ID.

The guard then grabbed and lifted Bogorad by her sweater and bra and removed her from the restaurant by throwing her out onto the street. Her upper body was exposed to patrons and she suffered “physical damages including contusions, wrist injuries, shoulder injuries and scarring which required medical treatment,” the lawsuit states. (freep.com, June 11)

This horrible incident comes in an atmosphere of right-wing backlash in anticipation that the U.S. Supreme Court will strike down Michigan’s ban on same-sex marriage. Another example is a bill just introduced in the state Legislature that will, unbelievably, require all marriages to be conducted by a member of the clergy. This will create hardships for same-sex couples in small towns where there may be no LGBTQ-welcoming religious congregations. And it creates difficulties for all who believe in the separation of church and state.

Bogorad’s lawsuit is a progressive and courageous action. However, to protect our rights, LGBTQ people must be where those rights were won in the first place — out in the streets!