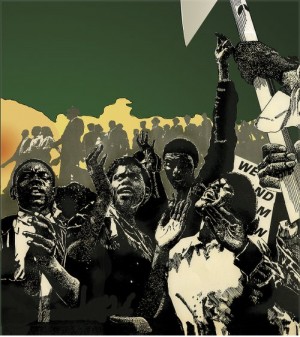 The movie “Selma,” which chronicles the 54-mile march in Alabama from Selma to Montgomery in 1965, was distributed nationally on Jan. 9 and has already been viewed by millions across the U.S. and the world. The Associated Press reported Jan. 11 that “Selma” came in second at the weekend box office, garnering $11.2 million.

The film has generated a tremendous degree of mainstream and social media interest. Directed by Ava DuVernay — with talk show host and network owner Oprah Winfrey serving as producer and depicting Annie Lee Cooper in a supporting role — the movie is the first feature film that depicts a key chapter in the history of the Civil Rights Movement. A made-for-television miniseries made in 1978 featured Paul Winfield as the Rev. Dr. Martin Luther King Jr. and Cicely Tyson as Coretta Scott King.

Despite the movie’s success, the Golden Globes on Jan. 11 recognized it in only one of four categories it was nominated for. Songwriter and producer John Legend and hip-hop artist Common were given the top prize for Best Original Song entitled “Glory.”

DuVernay wrote on Twitter on Jan. 11, “We’ve already won. We made a film we believe in, and now it’s out in theaters and moving in the world!”

Accepting the award, Legend said, “I’m so honored to be part of this amazing film that honors such amazing people … and is so connected to what’s happening right now. We still are in solidarity with those who are out there fighting for justice right now. We’re so grateful to write this song, hopefully as an inspiration to them.”

Some of the most widely publicized disagreements over the film’s accuracy surround the role of then President Lyndon Johnson. The film suggests that Johnson, played by Tom Wilkinson, categorically opposed the Selma Campaign and the introduction of voting rights legislation in 1965.

One of Johnson’s top advisers on domestic affairs, Joseph A. Califano Jr., wrote an opinion piece published in the Washington Post on Dec. 26 that went so far as to assert that the Selma Voting Rights Campaign was Johnson’s idea.

Califano wrote that “in fact, Selma was LBJ’s idea, he considered the Voting Rights Act his greatest legislative achievement, he viewed King as an essential partner in getting it enacted — and he didn’t use the FBI to disparage him.”

The editorial itself is full of historical inaccuracies, contradicting the facts of the period and the chronological order of events, which have been well documented by participants and historians.

“Ramsey Clark, the former U.S. attorney general, who was in Selma for the final march, was praiseworthy of the film, despite how Johnson was portrayed in it,” stated WW Managing Editor Monica Moorehead.

Andrew Young, a former aide to King and leading member of the Southern Christian Leadership Conference, said during several interviews that the actual situation was quite different, but that he was not offended by this aspect of the film.

Young rejected outright the notion that the campaign, which brought SCLC to Dallas County in January 1965, was Johnson’s idea. He said that Johnson did not believe voting rights legislation could make it through Congress only months after the passage of the Civil Rights Act of 1964.

In a Jan. 5 interview with Roland Martin, Young noted that he had traveled with King to Norway when the Civil Rights leader was awarded the Nobel Peace Prize in December 1964. Later the group went to Washington, D.C., for a meeting with the Justice Department, and it was only then that Johnson invited them to the White House.

However, the crisis created through arrests and beatings in Selma during January and February, followed by the police shooting of Jimmie Lee Jackson in neighboring Marion on the night of Feb. 18, prompted activists to organize a march from Selma to the state capitol in Montgomery.

During the first attempt, the Alabama state police and local law enforcement made vicious attacks using clubs, cattle prods and teargas on 600 demonstrators at the foot of the Edmund Pettus Bridge on March 7, known as “Bloody Sunday.” The beating of the demonstrators prompted a national mobilization in cities throughout the country. Many traveled to Selma two days later for yet another confrontation.

Amid legal challenges over an injunction against marching to Montgomery, King and the SCLC decided to turn 2,000 demonstrators around and headed back to Brown Chapel A.M.E. Church, the center of the campaign. This move caused confusion and debate within the movement, as some felt the mobilization should have refused to disperse.

On March 9, the Rev. James Reeb, a Unitarian minister from Boston who traveled to support the Selma Campaign, was severely beaten by white racists in Selma and died of his injuries the following day.

A favorable federal court ruling several days later affirming a constitutional right to march paved the way for Johnson to nationalize the Alabama National Guard, which provided protection so demonstrators could initiate and complete the final march from March 21-25.

On the day the march concluded, Viola Liuzzo, a volunteer activist from Detroit portrayed in the film by Tara Ochs, was murdered in her vehicle while transporting demonstrators through Lowndes County. It was later revealed that she was killed due to a Ku Klux Klan conspiracy.

In late February, Johnson came out in favor of new legislation, which worked its way through Congress over the next five months.

Despite a few historical inaccuracies and other minor problems, many feel the film can play a progressive role in light of the resurgence of the anti-racist struggle, manifested through rebellions and mass demonstrations in response to the police killings of Michael Brown in Ferguson, Mo., Eric Garner in Staten Island, N.Y., and Tamir Rice in Cleveland.

The fact that these tremendous events unfolded five decades ago illustrates how far the struggle against national oppression has to go in this country.  At the same time, the developments over the last five months reveals the capacity of African Americans and their allies to create new methods of agitation aimed at the state and the corporate structures of the racist capitalist system.