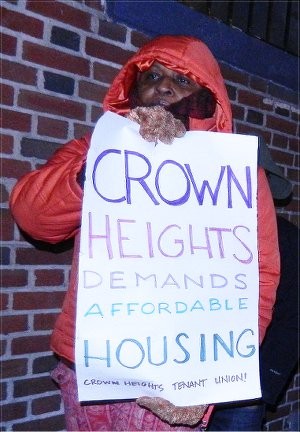 After three mostly below-freezing days without heat or hot water at an apartment building at 1045 Union St. in Crown Heights, Brooklyn, and calls to New York City’s emergency hotline made in vain, Brooklyn’s Crown Heights Tenants Union called an emergency protest on Jan. 10.

More than 30 people joined the rally/protest in front of the apartment building. The mostly women of color — members of the Crown Heights Tenants Union Local #3 [ZT Realty tenants] — chanted “No justice! No rent!” Two TV stations arrived to cover this action.

Then came several cops, inspiring the tenants to chant demands that the landlord be arrested. Said tenant Shirley Coit: “I’ve been here 30 years. ZT Realty is the worse management. Three days without heat! I was crying. I know they want us out. It’s just to harass you out. But they can’t move me! I’ll stay and fight! We all will!”

As the protest drew attention and more support, and as cops went into the building to investigate, the landlord showed up. Soon the heat and hot water were on!

Meanwhile, tenants exposed further neglect and abuse, including fallen ceilings, mold and broken mailboxes. ZT Realty has made no repairs, even though Local #3 made demands about these issues last month. The company’s denial of justice for tenants, as it tries to force them out for its conversion plans, is well-known.

The Jan. 10 victory will inspire more tenants to unite to fight the racist ruling class bosses and landlords by any means necessary! Cheers to the CHTU, who will join organizers in the South Bronx next weekend for the 2nd annual anti-gentrification conference. The battle for affordable housing continues.