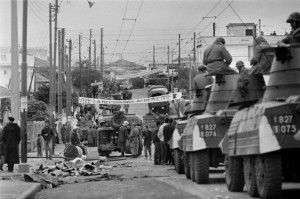 On Jan. 11, the French imperialist bourgeoisie mobilized and manipulated a massive demonstration in all the country’s major cities under hypocritical slogans extolling Western civilization and alleged “freedom of speech.” Their goal — which they share with U.S. and European Union imperialism — is a reactionary modern crusade against colonial peoples, mostly Muslims, in the guise of a “war on terror.”

One piece of French history that clashes with this ruling-class argument concerns the massacre of Oct. 17, 1961. If you don’t know about this massacre, it is because the imperialist defenders of “French civilization” have made every effort to keep it secret.

Between 1954 and 1962, French imperialism waged a bitter colonial war to hang on to its North African colony of Algeria. As is often the case with peoples of an imperial colony, many Algerian immigrants and their descendants lived in Paris in October 1961. Many sympathized with the National Liberation Front’s struggle for independence in Algeria.

On Oct. 17, some 30,000 protesters took to the streets in an unarmed demonstration in Paris to protest a curfew imposed by occupation forces on “Muslim Algerians” in the colony. (France24.com, Oct. 18, 2012)

Some 7,000 heavily armed French police – following direct orders of Paris prefect Maurice Papon — brutally attacked the peaceful demonstrators, trapping them on the bridges, beating, strangling and throwing them into the Seine River to drown. Papon told his officers he would stand behind their slaughter of the protesters.

Because so many bodies were lost in the Seine, there is uncertainty about the number of people the French police killed. Estimates range between 70 and 300. Thousands were injured and 11,000 arrested.

The next day, the French newspaper Libération reported the official toll as two dead, several wounded and 7,500 arrests. They and the rest of the corporate French media collaborated with the French state and covered up the real story of the massacre for decades. The international imperialist media did the same, even though reporters saw dozens of bodies floating in the Seine. (wrmea.org, March 1997)

Finally, in 1991, French historian Jean-Luc Einaudi wrote a book on the massacre, “The Battle of Paris.”

Top-cop Papon had collaborated with the Nazi occupation during World War II and sent Jews, Communists and other Resistance fighters to their deaths. He was tried in France and found guilty of complicity in war crimes decades later in 1998. More information on the massacre came out during Papon’s trial. Sentenced to 10 years in prison, Papon was released in 2002 on alleged health grounds, but died in 2007 at the age of 96.

In 2005, filmmaker Alain Tasma made a film about the massacre, “Nuite noire,” and stories of the event became incorporated into other films and books. Current French Premier Francois Hollande acknowledged the massacre officially for the first time in 2012.

The French fleet first sailed across the Mediterranean, invaded the city of Algiers and took it in 1830. At the time Algiers was ruled from Turkey by the Ottoman Empire, which surrendered the port city after a brief battle. The Indigenous people of Algeria, including both Arab and Berber tribes, put up heroic resistance to the French in the country’s interior.

French Lieutenant-Colonel Lucien de Montagnac, an officer in the French expeditionary force in Algeria, gave another vision of “French civilization” in a letter to a friend dated March 15, 1843, which his nephew later published: “This is how, my dear friend, we must make war against Arabs: kill all men over the age of 15, take all their women and children, load them onto naval vessels, send them to the Marquesas Islands or elsewhere. In one word, annihilate all who will not crawl beneath our feet like dogs.” (“Lettres d’un soldat,” Plon, Paris, 1885; republished by Christian Destremeau, 1998, p. 153)

By 1845, the French military was routinely putting this program into practice. General Aimable Pélissier reported the massacre of a Berber tribe of 1,500 people who had taken refuge in a cave. The French troops commanded by Pélissier burned the Berbers alive. This included all the children and elderly people — and, of course, the women who were heroic resistance fighters.

The French Army in Algeria prevented these reports from reaching Paris and possibly allowing some progressive members of Parliament to object to the genocidal acts carried out in the name of “French civilization.” So much for “freedom of the press.”

These stark truths accurately describe how the French ruling class imposed its rule over large parts of the world when building a colonial empire in the 19th century, second only in size to the British Empire.

Currently, U.S. imperialism is the dominant reactionary power policing and waging war on the world’s people. No one should forget this. A look at the history of French colonialism and imperialism, however, can help counter today’s blatant, pro-imperialist propaganda emanating from Paris.

France’s pre-World War II empire extended from Kanaky and Fiji in the South Pacific through Indochina to what are now Lebanon and Syria to Madagascar and Reunion islands in the Indian Ocean to what are now Lebanon and Syria. It included vast swaths of West and North Africa. The empire reached across the Atlantic Ocean to the islands of Martinique and Guadeloupe in the Caribbean and French Guiana in South America. It once included Haiti. However, in 1804, the world’s first successful slave revolt — which required enormous sacrifices by the enslaved population — expelled Napoleon’s France.

Fast forward to 1946 when imperialist France had just emerged from the German occupation during World War II. The Arab and Berber peoples carried out mass demonstrations and uprisings in Algeria against French rule. To suppress that rebellion, the French troops massacred 6,000 Algerians.

French imperialism considered Algeria to be part of France — much like U.S. imperialism does with regards Hawai’i and Alaska and in a slightly different way with Puerto Rico. Even though there were over a million European-origin French who lived in Algeria as settlers, the more than 6 million non-European Algerians began an eight-year war of liberation starting in 1954.

But that was not France’s only colonial war. The French Army and the notorious French Foreign Legion tried to drown all liberation movements in their own blood. not only the one in Algeria. In 1947, the people of Madagascar, armed mostly with spears, took on a well-armed, 30,000-strong French army. The soldiers carried out a strategy of terror and psychological warfare. According to General Staff reports, they killed 89,000 people to “pacify” the rebellion, There were using “torture, summary executions and villages [which were] forcibly evacuated and torched.” (Le Monde Diplomatique, March 1997)

Vietnam’s struggle for liberation from France went on from 1946 to 1954 before the Vietnamese Communists defeated French imperialism in the battle of Dien Bien Phu. Then it took another 21 years before Vietnam’s victory over U.S. imperialism — after the U.S. killed 3 million Vietnamese.

Because this article focuses on the crimes of French imperialism and the resistance of Algerians, it has omitted much about the actions of the French working class in solidarity with colonial peoples. Also, the French ruling class was likewise murderous when ordering French troops to crush the working-class revolt of 1871 known as the Paris Commune; the soldiers shot down 30,000 French workers.

What is needed now more than anything else is for the working-class movements in imperialist countries to show solidarity with the struggles of oppressed peoples — both as immigrants and in their own countries. This — and not “defense of Western civilization” — is how humanity can prevail.