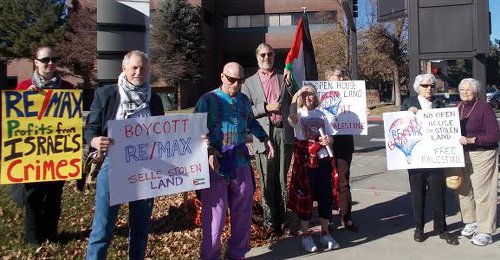 Protesters marched with signs in front of the RE/MAX International headquarters in Denver to raise awareness that this U.S.-based global real estate corporation was selling Palestinian West Bank property to Jewish-only settlements that have displaced thousands of Palestinian families in the West Bank in violation of international law.

RE/MAX profits from Israel’s relentless theft of Palestinian land by selling and renting homes in the occupied West Bank exclusively to Jews.  The Boycott-Divestment-Sanctions (BDS) campaign not only wants to raise awareness of but financially target such companies to prevent their support by U.S.-based businesses.

The Dec. 2 protest came in response to a call from the Palestinian people,  including over 170 political parties, unions and organizations, for people of conscience all over the world to launch boycotts, and initiate divestment and sanctions against Israel.

The call for BDS includes targeting products and companies that profit from the violation of Palestinian human rights. Israel has denied the fundamental human rights of Palestinians, including life, freedom, equality, respect and self determination, through ethnic cleansing, racial discrimination and military occupation.

Members of different organizations supported the protest, including Jewish Voices for Peace, Friends of Sabeel and the organizing group — University of Colorado BDS. Protesters were stopped from entering the building but sent letters explaining why they were protesting to the CEO of RE/MAX with a representative of the company.