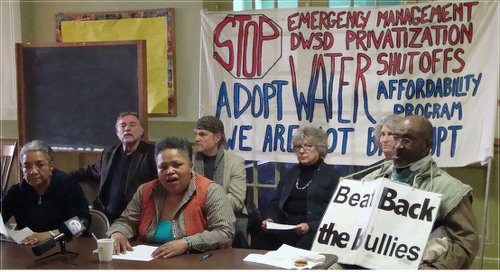 Dec. 8 — Nine Detroit activists were arrested in July for stopping trucks from leaving their yard to shut off thousands of poor people’s water. The nine are known as the “Homrich 9,” after the company hired by Detroit’s emergency manager to carry out water shutoffs of tens of thousands of people behind in their water bills by as little as $150.

Eight of the nine faced a pre-trial hearing today on the misdemeanor charges. In a press conference before the court appearance, the activists, joined by dozens of supporters, told the press that they had no choice but to take direct action to safeguard the health and safety of those being shut off and of the community as a whole.

Monica Patrick, one of the nine, stated that Judge Rhodes in the Detroit bankruptcy trial ought to have challenged the $537 million that the Detroit Water Department paid out to the big banks in order to get out from shady “bond swap” deals, rather than taking money from retirees’ pensions to pay off bank debt.

Other speakers declared that mass water shutoffs, mainly against poor people in the African-American community, were a form of violence not unlike the police murders being protested from coast to coast.