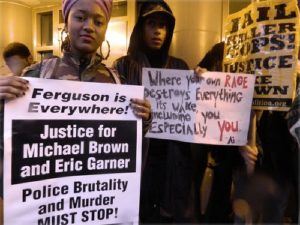 Brooklyn, N.Y., Dec. 6 — Akai Gurley, a 28-year-old unarmed Black father, was taking the stairs with his partner at their apartment building in the Louis H. Pink Houses, a public housing project in East New York, Brooklyn, when he was shot to death on Nov. 20 by members of the New York Police Department.

This working-class community is mostly Black, West Indian and Latino/a.

The NYPD who fired at and killed Gurley then called another cop, instead of trying to get medical care for Gurley. The NYPD issued a statement calling the killing an “accident.”

In spite of a cold, day-long downpour, some 150 Pink Houses tenants and others held a militant, spirited rally today in honor of Gurley and all those murdered by police. Today is New York’s fourth day in a row of protests against police brutality and murders of innocent people of color, coming on the heels of Eric Garner’s killer walking free. The crowd was moved by rousing talks — especially from women of color.

Nubia said, ” We are powerful pioneers! We are out to fight the power! The time is crucial. Oppression breeds resistance!  We will unite!”

Carla Reyes of Answer said, “The system is broken! What do we do?  Where do we find hope? Out in the streets!’

Marlami Curly spoke of the plight of parents, especially mothers who dread every day “not knowing where the bullet will come from.”  She spoke of so many “mothers who have lost sons and family lives stolen!”

Palestinian warrior Nancy of “Existence is Resistance” compared the plight of her family and nation to those of oppressed people in the U.S. Her support was welcomed and appreciated.

The feeling of unity was summed up and felt by all when several speakers repeated their demand: “We will not be bullied by NYPD! NYPD out of our community!”