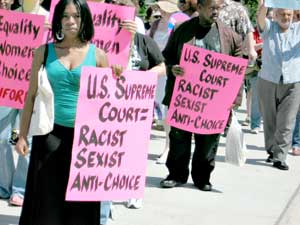 What is the state of abortion rights in the United States on Jan. 22, the 41st anniversary of Roe v. Wade, the Supreme Court decision legalizing abortion?

A total of 807 anti-choice laws have been passed by states since 1995, with more than 200 since 2011. In its Jan. 14 “State of the States” report,  the Center for Reproductive Rights divides restrictions into four categories: limits on insurance coverage, bans on abortion care, targeted regulations on abortion providers, and restrictions on medical (prescription) abortions.

NARAL’s 102-page report, “Who Decides? The Status of Women’s Reproductive Rights in the United States,” details each state’s status. While 10 states enacted 16 pro-choice measures last year, 14 states have total bans on abortion rights, 12 of which were enacted before the Roe decision in 1973. These laws would immediately take effect if Roe is overturned.

Twelve states already had bans on abortions after 20 weeks without an adequate health exception; they were joined by Texas and North Dakota in 2013. Arkansas passed a ban after 12 weeks. All bans defy standards set by the Roe ruling.

Congress debated 87 anti-choice bills in 2013, many related to gutting abortion and contraceptive coverage in the Affordable Care Act. Fortunately, all were defeated. (For details, see CRR’s study, “Under Attack: Reproductive Rights in the 112th Congress.”)

However, two congressional actions severely limited reproductive rights: food stamps cut by the sequester and long-term unemployment insurance ending in 2013. Reproductive justice is based on the premise that all women, regardless of nationality, class, gender or sexual identity, and various abilities, must have the right to have and raise healthy children as well as to control all aspects of their own lives. Being able to feed and provide for themselves and their children is essential to ensure those rights.

On Jan. 13, the Supreme Court refused to hear an appeal of a federal court ruling rejecting Arizona’s 20-week ban on abortions. It’s not clear how this will affect bans in other states, though it might encourage new lawsuits opposing them.

On Jan. 15, the Supreme Court heard arguments for and against a Massachusetts law that established a 35-foot buffer zone around women’s health care clinics. Marty Walz, of Massachusetts Planned Partenthood, told NPR Jan. 15 that “nothing else in our 30-year history has worked” to keep anti-choice protesters from harassing clients and staff when entering or leaving clinics.

It must be remembered that two clinic workers were murdered and five injured in 1994 at a Planned Parenthood clinic in Brookline, Mass. Walz noted buffer zones are around all polling places as well as the Supreme Court. The court approved a clinic zone in 2000, though its composition is now more anti-choice.

On Jan. 17, a federal court blocked a demeaning, medically unnecessary ultrasound law in North Carolina. The law required that doctors show women seeking an abortion an ultrasound picture  and describe the fetus in detail to shame women into canceling their abortion.

Congress initiated its first 2014 anti-choice measure on Jan. 15 when the House Judiciary Committee passed HR7, which would ensure abortions are not directly funded by any federal program or department. Since 1977, the Hyde Amendment has denied Medicaid coverage for abortions for poor women, who are disproportionately women of color, rural and young. By imposing new requirements in the tax code and on the private insurance market — that eliminate deductions for abortion services — it would impose sweeping restrictions that make abortions less affordable for all.

But the law’s most controversial provision — the most vicious, invasive attack of women — would require the Internal Revenue Service to conduct audits of rape and incest victims who have abortions and women who have abortions for life-threatening complications to ensure they’re not committing tax fraud. That means the IRS would have the final say over what “counts” as a sexual assault or a life-threatening situation, forcing women to prove their case. Only the most profoundly misogynous, reactionary minds could dream up such a draconian anti-woman law.

A pro-choice law was proposed in Congress in 2013 with by-partisan support, the Women’s Health Protection Act of 2013. As Sen. Richard Blumenthal (D-CT) wrote in a Nov. 13 op-ed posted on the Huffington Post blog, the law is needed “to stop states from subjecting reproductive health care providers to meet burdensome requirements that are not applied to medical professionals providing similar services.” Its purpose — “to protect a woman’s right to determine whether and when to bear a child or end a pregnancy by limiting restrictions on the provision of abortion services” — is based on the due process and equal protection clauses in the 14th Amendment.

Though the national organizations that traditionally defend and promote reproductive rights oppose all attacks on abortion rights and support the WHPA, they offer few other concrete solutions. They do mount pro-choice demonstrations in states against specific attacks, as they did in North Carolina, Virginia, Wisconsin and Michigan last year. They also rely on social media to activate a strong pro-choice response to hostile legislation throughout the country.

There has not been a national mobilization in Washington, D.C., in defense of choice since 2004 largely because groups that have organized them depend on voluntary contributions and demonstrations cost millions of dollars. Nowadays groups are pouring funding into filing lawsuits in various states and promoting activism in local areas, as they did in Albuquerque, N.M., last year where they helped overturn a 20-week abortion ban.

But that’s not enough to turn back the reactionary onslaught, which is showing its ugly, racist, sexist, anti-lesbian-gay-bi-trans-queer, anti-labor, anti-poor, pro-rich, pro-austerity, undemocratic face throughout the land. What’s needed is to draw lessons from successful movements in the past, like the massive Civil Rights Movement led by the Rev. Dr. Martin Luther King Jr.

During this King holiday, it’s timely to remember that women protesting in the streets for legal abortion propelled the Republican-majority court to decide in favor of Roe in 1973. So it’s time for women rights’ activists to join with all groups under attack — all low-wage workers in fast food restaurant and retail jobs as well as bank tellers and airport workers, all workers fighting for unemployment and union rights, and all those in low-income and oppressed communities fighting for their very survival —  in a massive people’s power movement.

Only a united movement can make power to the people — and reproductive justice — a global reality.