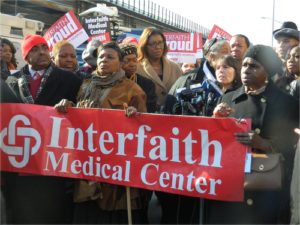 On the heels of 12 hospital closings in the last 10 years, a creative new tactic has emerged in an effort to stop the epidemic of hospital closings. The New Brooklyn Theater is showing Edward Albee’s play about 1930s Jim Crow Memphis and the famous blues singer, Bessie Smith, who died on the way to a hospital there. Albee’s play, “The Death of Bessie Smith,” is being produced inside Brooklyn’s Interfaith Medical Center in solidarity with the fight to keep Interfaith open.

On Jan. 17, hospital workers staged a successful occupation there when the hospital chief executive officer tried to cancel ambulance service and was forced to resign after hiding in his office. The ambulance service was restored. Medical statistics show that if Interfaith closes, 250,000 women in central Brooklyn will not be able to have screenings for breast cancer.

Many unions as well as community groups and elected officials have joined this fight, including 1199 SEIU, New York State Nurses Association and Communciation Workers Local 1180.

You still have a chance to be part of this inspiring linking of creative art with anti-racist, community and labor solidarity, contact The New Brooklyn Theater. Because of the tremendous outpouring of support, the play has been extended for additional showings Jan. 23-26, Jan. 30-Feb. 2 and Feb. 6-9. Thursday, Friday and Saturday performances are at 7:30 p.m., and the Sunday performance is at 2 p.m.