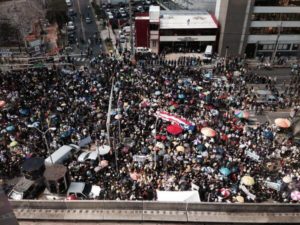 Thousands of teachers, students and their families and progressive organizations shook Puerto Rico’s local government as they went to the streets all over the island on Jan. 14 and 15 to demand that the cost of PR’s severe economic crisis is not carried on the backs of the public school teachers.

Since last fall, the U.S. financial firm, Moody’s, has been threatening to lower Puerto Rico’s credit rating to junk status because of difficulties paying $70 billion of its public debt.

For decades, island administrations have been selling bonds to sustain a parasitic colonial economy. The money obtained from these bond sales have been used to honor public employees’ payrolls, build some infrastructure — not always necessary — and mostly pay back the country’s debts.

No significant amount from these bonds has been used to create meaningful jobs that would ease the chronic unemployment, which, as of November 2013, was a whopping 14.7 percent. (tradingeconomics.com)

Because of the triple tax exemption on the interest paid by the PR government at local, state and federal levels and the extremely high yield of Puerto Rican bonds, they are greatly sought after in U.S. financial markets. Besides, there is the assurance that they will be paid since the island’s constitution guarantees that holders of bonds get paid before any other creditor. Puerto Rican bonds are held by more than 70 percent of municipal bond funds across the United States.

Island’s administrations sell out the people

Since around 2006, that is, even before the major financial crisis in the USA, the island has been in an accelerating economic downturn. There is a popular saying in PR: “When the United States has a cold, Puerto Rico gets pneumonia.” This saying expresses the colonial condition — that every economic indicator is worse in Puerto Rico because the island lacks self-determination to guide a course that benefits its people instead of Wall Street.

Every local administration, be it from the pro-statehood New Progressive Party (PNP) or the PPD, the pro-colony Popular Democratic Party — these parties alternate in government every 4 to 8 years — has imposed austerity measures that have deepened the masses’ plunge into poverty and have sold out the island through privatizations and regressive taxes.

The current governor is the PPD’s Alejandro Garcia Padilla. His campaign promise highlighted his “will” to govern for the people. Nevertheless, to satisfy U.S. investors, in the short time he has been in office since January 2013, he has imposed many anti-people measures. He privatized the airport and highways, increased water and sewage service rates by 60 percent, increased the age of retirement and reduced government workers’ pensions.

Now Garcia Padilla is demanding reductions of public school teachers’ wages. There are more teachers in the island than government employees: 42,000 active and 38,000 retired teachers. Teachers do not receive Social Security, so any reduction in their pensions will leave them with little to no income.

On Dec. 24, as a cruel holiday gift, the governor signed into law (Law 160) the reduction of pensions for teachers and judges.

This latest attack, with the announcement of pension “reform,” aroused strong popular resistance. Teachers, already organized into a Broad Front, vowed to fight back, calling for a 48-hour work stoppage the first two days of classes on Jan. 14-15.

Eva Ayala, the head of EDUCAMOS and one of the main leaders of the Front, spoke with Workers World/Mundo ­Obrero on Jan. 19 about the work stoppage, meetings with the governor, the Front’s demands and strategy, the situation of teachers and the next steps in the struggle.

Ayala called the stoppage “very successful” and shared some of the experiences and feedback. Despite her hoarse voice — a product of constant actions and shouting in the rain that led to a cold — she conveyed the great enthusiasm of the striking teachers.

“This was a strike in all the barrios in Puerto Rico. I took on the task of visiting several towns, and it was very interesting that there were marches in every town I visited, of teachers, parents and students. It was a scene never seen in Puerto Rico.

“I thought that if there were marches in every place in PR the first day, then it would be a sea of people the following day, and that is exactly what happened. I have gone to many protests in my life, but I’ve never seen something like this.

“The success occurred because even teachers’ organizations that do not have a tradition of protesting were involved.” She pointed out that the membership pushed the hesitant conservative leadership into action. The organizers divided the island into four regions and visited each one to explain the situation to teachers, students and the communities.

Another reason for the success, she said, was the participation of school directors and supervisors’ organizations that usually play a conservative role.

“When I was asked the day before how many people will participate, I said 82 percent, based on the responses we had received from teachers, but it surpassed all our expectations.” All the schools were shut tight.

Another factor Ayala stressed, besides the participation of students and parents, was the involvement of the labor sector. “An element that has never been in these actions was the participation of every labor sector, encouraging the parents to not send their children to school, giving enormous solidarity, helping in logistics, etc. Definitely the teachers are in the struggle.

“Some even called it a ‘perfect work stoppage.’”

Moody’s demanded the Puerto Rican government reduce teachers’ pensions to avoid getting the bonds rated as junk. The teachers’ demand is brief and to the point: Do not touch teachers’ retirement fund.

Ayala said, “We know there is a deficit; the retirement board needs $333 millions to solve it. But we have a strategy that we brought to the governor.”

Among the nine points of this strategy is to increase by 1 percent the contribution of foreign companies. One of the reasons the economy is in shambles is that PR is a tax paradise for foreign companies. Even after tax-free legislation was overturned in 1996, low taxes and loopholes for these companies still make it lucrative for them. This effectively transfers money from the Puerto Rican people to the pockets of Wall Street financiers.

Said Ayala, “These foreign companies get more than $30 billion in profits per year and only pay 4 percent to the government, and this percent will be eliminated in 2017. This [1 percent] increase alone could be assigned to the teachers’ retirement system.”

Ayala reminded us that the teachers “have not had a salary increase in more than a decade. And with our low pay, we have to pay for materials needed in the schools, such as newspapers, copies, paint for the building, computers, etc.”

The government, which is a colonial government, is at a dead end. Governor García Padilla met with the Front on four occasions before the strike and promised that he would not harm them. Since he is a tool of imperialism, however, a colonial administrator has no power. He very obediently signed into law the Wall Street-drafted law against the largest agency in the island, the education department. In the process he hurt directly or indirectly all the people of Puerto Rico.

Stressing that “in PR, 82 percent of teachers are women,” Ayala continued: “A high percentage of these are household heads. At the elementary level, the proportion of women exceeds 90 percent. This implies that the dismantling of the Teachers’ Retirement System mainly concerns women. That’s why we have always said that the teachers’ struggle in our country — and in this case the fight in defense of our retirement system — has a woman’s face.”

This is not the end of the struggle. A Dialogue Committee has been established with the participation of the Front, the government and the Archdiocese. The committee has barely a couple of weeks or so to work.

On Jan. 14, the first day of the strike, the Supreme Court of Puerto Rico stopped the implementation of the teachers’ retirement reform law pending a study by a special commissioner who should make a final determination no later than Feb. 7.

Regarding the committee, Ayala said that the Front has warned that if no results are seen, they will continue the struggle in the streets.