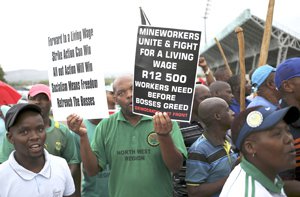 An 11-week strike by 7,000 members of South Africa’s National Union of Mineworkers (NUM) has resulted in a settlement granting them a raise of 9.5 percent. The strike against Northam Platinum facilities at Zondereinde was a major challenge for the NUM in the face of intransigence by the bosses and competition from the rival Association of Mineworkers and Construction Union (AMCU).

The strike reflected protracted strife in the platinum mining sector, where for the last year and a half tens of thousands of workers have dropped their tools. In August 2012, 34 platinum mine workers at Lonmin’s facilities at Marikana in Rustenburg were gunned down by the Northwest provincial police.

The NUM released a statement on Jan. 17 stating: “The NUM will continue to fight for better salaries and better working conditions for our members. NUM will never allow a situation where our members risk their precious life going deep down in the surface of the earth in searing heat to earn poverty wages. It is unacceptable.”

The statement adds: “This has been a peaceful, bloodless and effective legal strike. The NUM maintains that violent strikes are unnecessary and they should never be allowed to replace dialogue. We truly thank our members for their discipline during this tough and difficult industrial action here at Northam Platinum Limpopo.”

While this strike has ended, other industrial actions may be looming in the most intense platinum-producing region of the Northwest. The rival AMCU, which now has more members than NUM in the Lonmin and Impala mines, may strike during the week of Jan. 20.

According to Business Day Live: “The NUM’s fierce rival, the Association of Mineworkers and Construction Union (AMCU), is threatening to issue strike notices next week at Impala Platinum and Lonmin, the world’s second – and third-largest platinum producers, respectively.

South Africa is the world’s largest producer of platinum, with approximately 80 percent of known reserves. During 2013, the bosses were threatening to lay off thousands of workers, claiming that demands for substantial wage increases were driving down profits and creating losses. Nonetheless, the miserable wages and conditions of employment created an atmosphere of militancy that the owners could not ignore.

Business Day Live stressed that “platinum company CEOs have warned against granting double-digit wage increases in an industry where more than half of the sector’s mines are loss-making in the face of high input costs and relatively weak prices for platinum group metals.” Similar arguments have been put forward by the capitalists in the gold sector, where large-scale downsizing has occurred in South Africa over the last two decades since the African National Congress (ANC) has been in power.

National presidential and parliamentary elections will be taking place in South Africa in April. The ANC’s campaign Manifesto is calling for increased social spending and the creation of 6 million new jobs.

The Congress of South African Trade Unions (COSATU), the nation’s largest labor federation, has endorsed the ANC election Manifesto, although a fierce debate is going on within the organization.

COSATU participated in the formulation of the Manifesto and its launching on Jan. 11. The federation views it as building on what it considers the progress made over the last 20 years.

A COSATU statement issued Jan. 15 in support of the ANC election Manifesto lists several reasons for its endorsement. These points of agreement include a pledge by the ANC to increase wages and ensure collective bargaining and employment equity, along with reforming the financial sector of the national economy.

Other important issues relate to the ANC’s pledge to “speed up the roll-out of our massive economic and social infrastructure programs, especially in energy, public transport, ICT and water supply, to unlock economic opportunities, create jobs and improve the quality of life of our people.”

COSATU supports the Manifesto’s call to “enforce legislation to eliminate abusive work practices in atypical work and labor brokering and improve the capacity of the Department of Labor to enforce this and all other labor laws. COSATU will work with government to ensure compliance with these laws and will continue to campaign for the total banning of labor brokers.”

However, the largest current affiliate in COSATU, the National Union of Metalworkers of South Africa (NUMSA), has criticized the federation leadership for what it describes as its uncritical support of the ANC. NUMSA held a special congress in December where these differences were aired publicly.

Even though NUMSA has taken positions at variance with COSATU, the ANC and the South African Communist Party (SACP), the labor federation says that it will not suspend or expel the affiliate. There has been speculation that NUMSA may attempt to organize across sectors, which would violate COSATU’s constitution of “one union, one industry,” and possibly form a workers’ party to eventually contest elections on a local and national level.

The ongoing labor actions as well as the upcoming elections will give a strong indication of the trajectory of the South African working class. Workers and youth have been strongly represented at the ANC’s Manifesto launches throughout various regions of the country. If this is any indication of the popularity of the ruling party, it will be victorious in the upcoming elections, where the government for the next five years will be ­selected.