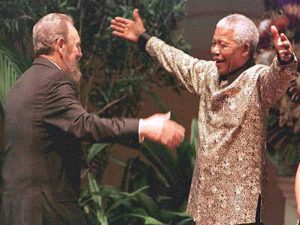 Nelson Mandela and Fidel Castro meet in
Durban in 1998 for Non-Aligned Movement Summit.

Nelson Mandela’s death has drawn responses from throughout the U.S. and the world. To oppressed and working people, Mandela was a symbol and example of self-sacrifice and lifelong commitment to revolutionary change.

Placing his legacy in a revolutionary perspective is important in countering the corporate media view, which attempts to strip away the actual history of collective struggle in South Africa and its influence on the international movements against racism, imperialism and class exploitation.

The struggle for freedom and liberation in South Africa began in 1652, when the Dutch settler Jan Van Riebeeck landed at the Cape of Good Hope already accompanied by enslaved Africans from other regions of the continent.

Mandela was born on July 18, 1918, in the Eastern Cape region of South Africa at Mvezo in Umtatu, and would grow up in the village of Qunu. He came from a traditional Xhosa royal lineage among the Thembu people but sought to expand his horizons and went to live in Johannesburg, the commercial and industrial center of the white-dominated settler state.

Mandela was an athlete and became a boxer. He would study law and later join the African National Congress with the aegis of his lifelong friend Walter Sisulu. In subsequent years he became a leading member of the South African Communist Party (SACP), serving on its central executive committee.

During the 1940s, the ANC formed the Youth League, which advanced a “Program of Action” calling for the transformation of the organization into a mass national liberation movement seeking to directly confront the system of racism and class oppression. The ANC had been formed in 1912 in the Free State province of South Africa in an effort to bring all of the African nationalities into one organization to more effectively fight colonial domination.

Earlier in 1910, the Union of South Africa had been formed. This represented a compromise between the English and the Dutch descendants, the Boers, who had fought a bloody three-year war from 1899 to 1902 over which European oppressor nation would control this vast agricultural and mineral-rich land. The Union of South Africa represented an unholy alliance of the white settlers who sought to further rationalize a system of land confiscation, mineral extraction and the exploitation of the labor of the majority African population.

The ANC drew upon the legacy of struggle waged by various African nationalities such as the Basotho, Zulu and Xhosa during the 19th and early 20th centuries, fusing the legacy of these wars of resistance and liberation into a unified national movement.

Under the Union, the British became dominant in government. However, after World War II, the Nationalist Party of the Boers took power in 1948, codifying the system of racism, national oppression and class exploitation as “apartheid.” Many within the Afrikaner (Dutch descendants, or Boers) population had supported the Nazis.

The ANC was representative of the awakening of all Africans throughout the continent from the ravages of slavery and colonialism over the course of the 20th century. In the immediate aftermath of World War II, the mass determination of the African people grew more militant. Independence movements were formed all throughout the region, from Egypt and Algeria in the North; through Ghana, Guinea, Mali and others in the West; all through Central Africa, including Congo; across to the East, with uprisings in Kenya and Tanzania; and down to the South, where Angola, Mozambique, Zimbabwe, Namibia, South Africa and others would arouse hundreds of millions in the mass, labor and armed struggles aimed at national liberation.

The armed phase of the African revolution

Some states in Africa gained their independence through mass political resistance absent of an organized armed struggle. Nonetheless, many others were forced to take up arms and fight the colonialists and their allies for national liberation.

A wave of repression swept South Africa in response to the “Defiance of Unjust Laws Campaign” from 1952 to 1956. The top leaders of the ANC, the SACP, the Congress of Democrats, the Colored People’s Congress, the Federation of South African Women, the South African Indian Congress and the South African Congress of Trade Unions were charged with treason. A show trial, staged by the apartheid regime, lasted from 1956 to 1960. This treason trial, involving 156 organizers, collapsed in 1960 with the acquittals of Mandela and many other leaders.

After the Sharpeville massacre of March 21, 1960, prompted the banning of the ANC, the Pan-Africanist Congress and others, Mandela and his comrades decided to organize Um Khonto We Sizwe (Spear of the Nation), a guerrilla unit that would attack power stations, government buildings, rail lines and other symbols of white-minority rule.

In May 1961, amid a general strike, in an interview with a British news reporter at an undisclosed location in South Africa, Mandela announced that “it is futile to continue talking nonviolence to an enemy” only concerned with maintaining control through violence.

Mandela left the country secretly while under banishment in South Africa and traveled to other parts of the continent, as well as England. He studied guerrilla warfare and military affairs in Ethiopia and at an Algerian National Liberation Front (FLN) training camp in Oujda, Morocco. In Ethiopia, Mandela addressed the Conference of the Pan-African Freedom Movement of East and Central Africa in January 1962.

During the PAFMECA Conference, Mandela, representing the ANC, told the delegates: “During the past 10 months I moved up and down my country and spoke to peasants in the countryside, to workers in the cities, to students and professional people. It dawned on me quite clearly that the situation had become explosive.”

He continued: “It was not surprising therefore when one morning in October last year [1961] we woke up to read press reports of widespread sabotage involving the cutting of telephone wires and the blowing up of power pylons. The government remained unshaken and white South Africa tried to dismiss it as the work of criminals.

“Then on the night of 16 December last year the whole of South Africa vibrated under the heavy blows of Umkhonto we Sizwe. Government buildings were blasted with explosives in Johannesburg, the industrial heart of South Africa; in Port Elizabeth; and in Durban. It was now clear that this was a political demonstration of a formidable kind, and the press announced the beginning of planned acts of sabotage in the country.

“It was still a small beginning because a government as strong and as aggressive as that of South Africa can never be induced to part with political power by bomb explosions in one night and in three cities only. But in a country where freedom fighters frequently pay with their very lives and at a time when the most elaborate military preparations are being made to crush the people’s struggles, planned acts of sabotage against government installations introduce a new phase in the political situation and are a demonstration of the people’s unshakeable determination to win freedom whatever the cost may be. The government is preparing to strike viciously at political leaders and freedom fighters. But the people will not take these blows sitting down.”

Mandela later re-entered South Africa and was captured in August 1962. He would reveal during the Rivonia Treason Trial of 1964 that “in Africa I was promised support by such men … [as] Ben Bella, now President of Algeria. … It was Ben Bella who invited me to visit Oujda, the Headquarters of the Algerian Army of National Liberation, the visit which is described in my diary, one of the Exhibits.”

What has not been mentioned by corporate television networks that have lavished praise on Mandela in his death is that the U.S. Central Intelligence Agency is said to have played a critical role in the ANC leader’s capture. This claim has been reported in numerous sources even within the South African press.

In a June 10, 1990, article published in the New York Times on the eve of a visit by Mandela to the U.S., just four months after his release from 27 years in prison, David Johnston wrote that a report from the Cox news service revealed that “the intelligence service, using an agent inside the African National Congress, provided South African security officials with precise information about Mr. Mandela’s activities that enabled the police to arrest him.”

The article noted that “the report, scheduled for publication on Sunday, quoted an unidentified retired official who said that a senior CIA officer told him shortly after Mr. Mandela’s arrest: ‘We have turned Mandela over to the South African Security branch. We gave them every detail, what he would be wearing, the time of day, just where he would be.’”

Johnston also wrote that “Mark Mansfield, a spokesman for the agency, declined to comment on the news-service report. ‘As a matter of policy, we do not discuss allegations of intelligence activities.’”

This collaboration between the racist apartheid regime and U.S. intelligence was replicated in the economic sphere. At the height of the apartheid system, nearly 400 corporations inside the U.S. had direct investments in racist South Africa and its colony of Namibia, which gained independence in 1990.

The investments of U.S. imperialism and its allies in the West became a major focus of the ANC and its supporters both inside and outside of South Africa. In support of the mass movement for national liberation, millions inside the U.S. and around the world joined the various campaigns for the divestment from apartheid and the release of its political prisoners. Nelson Mandela became a household word during the mid-1980s as a symbol of resistance by the South African people against national oppression.

It was the combined efforts of the armed, mass and labor struggles inside South Africa, in conjunction with the international movement of solidarity, that proved to be decisive in the unbanning of the ANC, the SACP and other organizations, the release of political prisoners, the return of exiles from outside the country and the eventual negotiations for the holding of democratic elections. Those elections resulted in the ascendancy of the ANC to state power in April-May 1994.

Another decisive factor in the total liberation of Southern Africa was the defeat of the racist South African Defense Forces in southern Angola during 1987-1988. Popular Movement for the Liberation of Angola leader Dr. Agostino Neto had asked Cuba to intervene in Angola in November 1975, when the independence of the former Portuguese colony, newly won through armed struggle, was imperiled.

In late 1975, Cuba deployed 55,000 of its own troops, which fought alongside the MPLA military forces and others to defeat the SADF for the first time.  Cuban internationalist forces would remain in Angola for 13 years, until the apartheid army was defeated by the combined forces of Cuban President Fidel Castro’s army, the Angolan military, the armed wing of the South West Africa People’s Organization, the People’s Liberation Army of Namibia and Um Khonto We Sizwe, which had bases inside Angola. Some 350,000 Cubans would serve in Angola between 1975 and 1989, making a monumental contribution to the African Revolution.

Mandela would serve one five-year term as president of the Republic of South Africa, from 1994 to 1999. His administration built homes for 2 million South Africans, provided electricity and running water to millions more, opened up the health care system to Africans, instituted affirmative action programs to empower the African majority and developed a constitution that outlawed the death penalty as well as racial and gender discrimination.

Under Mandela, South Africa would serve as an example to all oppressed and struggling peoples throughout the world. The country continues today to be in solidarity with the liberation movement of the Palestinians and the people of the Western Sahara, and maintains positions in support of African unity and economic integration.

Although the struggle inside South Africa and throughout the region is by no means complete, the legacy of Mandela through the ANC, SACP, COSATU and other affiliated organizations will live on. The neocolonial phase of post-independence Africa will also pass as the contradictions within world capitalism become more pronounced and unbearable, as did apartheid.