The following statement was posted at pflp.ps on Dec. 7. 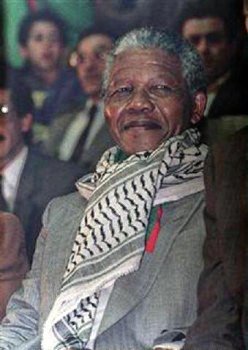 The Popular Front for the Liberation of Palestine expressed its deep condolences upon the death of the South African national symbol of struggle and solidarity against the apartheid regime, a friend of liberation movements around the world, the leader Nelson Mandela.

The Front described Mandela as a hero in the struggle of his people, the peoples of Africa and the world, an example of a fighter and a courageous advocate and leader of various forms of legitimate resistance to eradicate apartheid in his country and struggle for freedom and justice. He refused to condemn armed struggle or limit the right of his people to fight apartheid to gain his release from prison, where he was held for 27 years as a political prisoner.

The PFLP considers his departure to be a great loss for the struggle of our Palestinian people, as part of the struggle of the peoples of the world for freedom and justice. Mandela is an iconic figure of the struggle of humanity on the road to liberation, just peace, and justice. The Front expressed its deepest condolences to Mandela’s family, his comrades in the African National Congress and the people of South Africa. The Front further confirmed the international solidarity and historical friendship between the South African and Palestinian peoples, in the struggle against occupation, racism, imperialism and Zionism, and for freedom, social justice, and social progress.