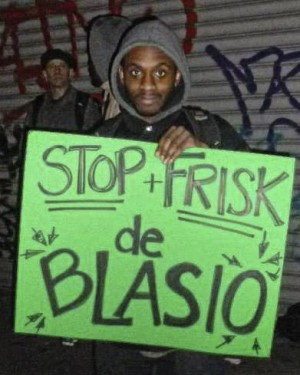 Dec. 9 — People came out on a day’s notice in freezing weather to protest New York Mayor-elect Bill de Blasio’s appointment of arch-racist William Bratton as the next police commissioner.

De Blasio had campaigned as an opponent of stop-and-frisk racial profiling. But Bratton pioneered the policy under former Mayor Rudy Giuliani and has since been spreading the practice to cities throughout the U.S.

The protest was held outside a gala fundraiser for The Nation magazine’s Nation Institute, where Democrat de Blasio was the main speaker. As wealthy liberals and politicians entered the Metropolitan Pavilion on Manhattan’s West 18th Street, they were confronted by mostly young, working-class people of color chanting, “We don’t want the status quo! Bill Bratton has to go!” and “Bratton: war criminal of Manhattan!”

Police sneaked de Blasio in through the venue’s back entrance. As protesters raced to confront him when he left, they encountered a surreal scene as they stumbled into a fire department drill involving flares, actors on the ground shouting for help, and dummies strewn across the street.

Undeterred, about 10 protesters were able to rush de Blasio’s van with signs, chanting as it sped away from the event.