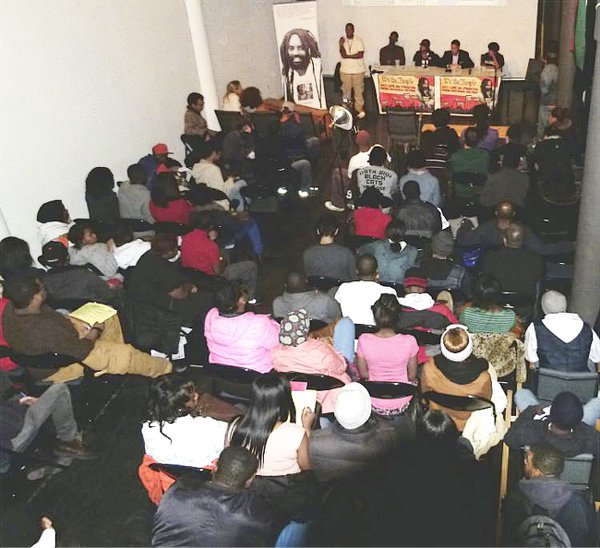 While dozens of schools close, incarceration of youth of color continues to increase, and the Black youth unemployment rate jumps to around 50 percent, young people feel the heat of an all-out war against them in Philadelphia.

On Dec. 7, 75 young people from across Philadelphia came together at a “Youth on the Move” forum, hosted by Students for Mumia Abu-Jamal, to discuss how to fight back against these conditions.

An uncompromising panel of young Black leaders addressed the needs of young people to build a movement to fight against education cuts and mass incarceration and the need to bring political prisoner Mumia Abu-Jamal home to the people of Philadelphia and to his supporters around the world.

Saeda Clark-Washington, a leader in the struggle for education and against mass incarceration, spoke of the need for young people to come together and challenge the school-to-prison pipeline and cuts to education.

Clark-Washington, a leader of Youth United for Change, urged young people to unite to fight for the National Student Bill of Rights, a youth-led project by organizations across the U.S. which works to build a common platform of demands for youth organizers. The diverse demands in the bill of rights include the right to free education through college, the right to housing and public transportation, the right for child care and employment, and the right to a curriculum which respects young people’s cultural and material needs.

Youth United for Change, along with the Philadelphia Student Union and others, will be building Student Assemblies across Philadelphia with the goal of building for a massive, nationwide march in Philadelphia in May to make these demands to the city and school district of Philadelphia.

Sabrina Sample, of the People’s Underground for Revolutionary Progress, along with education activist Dominique Smith, spoke about the need for young people to look beyond the the current racist, capitalist system and seek revolutionary change within society. Each spoke of the need to educate young people and start to build alternatives to the system of oppression.

Each panelist addressed how the life and work of Mumia Abu-Jamal are integral to their fight for the next generation. The struggle to free Abu-Jamal is part of the rich history of young people fighting back in Philadelphia. At the age of 15, Abu-Jamal led a walkout at his high school to rename it after Malcom X. The same year, he helped found the Black Panther Party in Philadelphia, becoming its Minister of Information. His tireless work as the “voice of the voiceless,” as a journalist and as a political prisoner, reflects his revolutionary passion for creating a new world, one of liberation and freedom.

The framing of Mumia Abu-Jamal

Th forum was held on the anniversary of the event that led to Abu-Jamal’s wrongful incarceration. On Dec. 9, 1981, Abu-Jamal was driving a taxi near 13th and Locust Streets in Center City Philadelphia when he was shot and beaten by police. He was charged with the murder of Police Officer Daniel Faulkner, while the real murderer escaped through the subway a block away. Despite the lack of evidence or due process, innocent Abu-Jamal — who at this point was a famous journalist and outspoken revolutionary — was sentenced to death by racist Judge Albert Sabo on July 3, 1982.

For the next 30 years, Abu-Jamal sat on death row, in torturous solitary confinement. Yet through the power of his own voice, he has continued to serve as a voice of the people, publishing seven books and issuing frequent “Live from Death Row” recordings on Prison Radio. Abu-Jamal’s energy and life continue to inspire people seeking justice across the world. He even has a street named after him, thanks to the work of activists in Saint-Denis, France. Across the world, activists have taken up Abu-Jamal’s struggle as part of the fight against racism and political repression.

Inspired by the history of Abu-Jamal, who grew up in the projects of Philadelphia and attended the same high school as several of the forum’s attendees, the crowd of young people vowed to continue to work together to build a mass movement to free Abu-Jamal and defend their rights to education, jobs and freedom.

On Dec. 9, Students for Mumia, as well as the International Concerned Family and Friends of Mumia Abu-Jamal, the International Action Center, Educators for Mumia and other community organizations fighting for Abu-Jamal’s freedom, will convene a press conference at District Attorney Seth Williams’ office to demand that Abu-Jamal be brought home. In the evening, organizers will plan for a big year of action in celebration of Abu-Jamal’s 60 birthday.