Airlines canceled over 18,200 flights in the U.S. and hundreds more in Canada between Dec. 22 and 28, affecting millions of people. Many of the cancellations were due to the winter storm catastrophe. 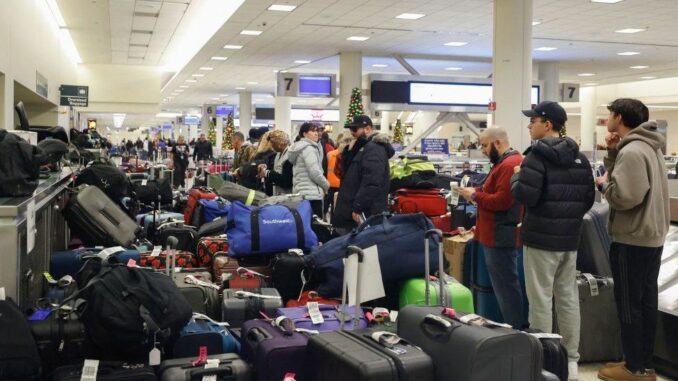 Winter Storm Elliot brought snow and ice and high winds to two-thirds of North America. According to the National Weather Service, about 200 million people in the lower 48 states were affected. Some 6 million households in the U.S. and 1.1 million in Canada, mainly in Ontario and Quebec, lost power.

Some airlines recovered and started flying fairly rapidly, but one major airline, Southwest, stranded hundreds of thousands of its passengers for days.

Southwest was consistently profitable before the pandemic, recording 47 years of profits. That would be notable in any industry, but airlines are notoriously prone to “boom or bust.”

Southwest’s profits were generated by its management ignoring what its unions were demanding — investments in needed software upgrades. Southwest Airlines Pilots Association President and Captain Casey Murray told NPR, “Southwest is having, really, some major issues connecting pilots to airplanes, connecting crews, flight attendants as well, to airplanes. And it’s been getting worse.” (NPR, Dec. 28) SWAPA is currently locked in negotiations with management.

In a Dec. 31 letter to the airline, SWAPA blamed corporate executives for a history of flight schedule meltdowns. Murray is quoted as saying in early November: “I fear that we are one thunderstorm, one [Air Traffic Control] event, one router brownout from a complete meltdown. Whether that’s Thanksgiving, or Christmas, or New Year, that’s the precarious situation we are in.” (swapa.org/news/2022/two-legacies/)

According to Lyn Montgomery, president of Transport Workers Union Local 556, which represents the airline’s 15,000 flight attendants, when crews get out of position because a flight has been canceled, they often have to spend hours on the telephone — 3, 6 or 9 hours on hold. In the open letter it sent to Southwest management, TWU Local 556 put its demands for improvements in crew scheduling ahead of pay raises.

The federal government isn’t helping the situation. Four months before Southwest’s system collapsed, 38 state attorneys general wrote to Congress to complain that the Department of Transportation, which is supposed to regulate the airline industry, was falling down on the job.

How passengers were affected

Seeing the plight of Southwest’s passengers particularly, it’s hard to swallow the fact that almost all of them suffered major inconveniences and had to pay out more money to either book with other airlines, rent cars or take trains. These other ways to travel have their own problems.

Year-end holidays for many people are the time to get together with family and friends, but people were also traveling to get medical care — one Southwest passenger missed a scheduled heart transplant — and for work.

The number of lost bags wasn’t reported, but TV news stations, newspapers and news websites were filled with images of huge numbers of unclaimed luggage. Southwest has said it will spend around $400 million to compensate passengers for their losses. That’s probably not enough.

The airline industry is flush with cash from the pandemic bailout funds they received, which they generally used to reward their stockholders and top executives.

Workers and the passengers they serve and transport have the right to be treated and transported with dignity and concern for their safety.