The following article first appeared on aljazeera.com on Dec. 31, 2022.

The death of football legend Pelé has saddened millions of football [soccer] fans. Born Edson Arantes do Nascimento, the Brazilian star has touched hearts and captivated minds across the world. In Africa, he has been celebrated, not only for his football mastery but also as a symbol of Black excellence and representation. 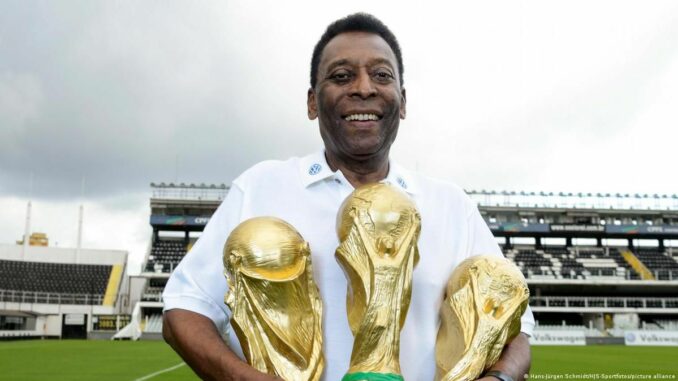 The Brazilian superstar Pelé rose to fame, just as Africans nourished Black pride in their fight against white supremacy.

For me, Pelé has been a source of indescribable joy and inspiration.

I was born into a world cruelly short of memorable Black stories and universally acclaimed Black heroes, a planet decimated by the violent political and economic power of white supremacy.

Whether it was politics, science, business or sport, whiteness had permeated every conceivable aspect of society and systematically shunted Black people to the fringes of human existence.

White people — we were told — were the best scientists, the best business managers, the best athletes. They were the models to emulate and look up to.

But we knew this was wrong. And we admired Black superstars like Pelé and Muhammad Ali and Black revolutionaries leading the African and Black liberation movements that were sweeping through the African continent and North America.

Growing up in what then was known as Salisbury, Rhodesia (today’s Harare, Zimbabwe), a bastion of settler colonialism, I was keenly aware of the “racial segregation” of heroes.

My heroes — freedom fighters — were described as “terrorists.” African nationalists like Joshua Nkomo and Robert Mugabe were imprisoned by the white-settler regime, after agitating for democracy, civil rights and equality for all races.

My own uncle, Moses, had joined the liberation movement as a teenager and underwent military training in Mozambique and Yugoslavia. After he left, for years we didn’t even know if he was alive. He only came back after we were finally liberated and Rhodesia became Zimbabwe in 1980.

Black people in sports who I looked up to were also disparaged and insulted. Pelé had a string of derogatory nicknames that he was called, while Muhammad Ali was once referred to as a “disgrace to his country” and a “fool.”

So my heroes weren’t celebrated in the spacious and well-developed areas of Salisbury that were occupied by largely wealthy and privileged white people or, for that matter, in mostly densely populated and impoverished Black communities.

For fear of deadly reprisals from government soldiers, sympathizers and spies, people only ever spoke about their unsung heroes at home and mostly in hushed tones. Rhodesian security forces regularly murdered Black people for supposedly collaborating with freedom fighters or breaching nighttime curfews.

Elsewhere, the Sharpeville massacre in South Africa and the violent crackdown on the 1967 uprising in the U.S. city of Detroit also demonstrated how the white world brutally resisted Black struggles for socioeconomic parity and political independence.

Amid this violence and fear, Black superstars like Pelé were giving us a flicker of hope. They defied the condescending stereotypes and stifling challenges that white supremacists foisted on us — on Black people everywhere.

Granted, Pelé wasn’t the first Black athlete to achieve tremendous success in a global sport or competition; he was the first Black man to make it to the pinnacle of football, a sport that the mostly poor people in Africa and the African diaspora loved to bits.

When I was young, I didn’t know about baseball legend Jackie Robinson or tennis star Althea Gibson, the first African American woman to compete in a professional tennis tour and win a Grand Slam title.

I adored Pelé, partly because football, unlike tennis, basketball and baseball, was an incredibly accessible sport.

Equipped with a “chikweshe,” a homemade plastic ball, my friends and I would often play football on bumpy makeshift pitches [playing fields] demarcated by sticks and stones.

Still, my admiration for Pelé wasn’t just about football.

Long before I was old enough to appreciate his countless achievements and confidently place him atop the pantheon of all-time football greats, the Brazilian football star was firmly embedded in Africa’s sociopolitical and cultural awakening. Alongside Muhammad Ali, he existed as a towering and indelible symbol of Black pride.

Pelé’s story helped to inspire devotion to Black identity, at a critical time in African and my country’s history. For a people severely traumatized by oppression and economic dispossession, his unequaled success lent us the freedom to take delight in endless possibilities for our future.

Later, pundits and fans alike would intermittently debate whether he was the greatest footballer in history, ahead of Argentinian maestros Diego Maradona and Lionel Messi — or Portugal’s Cristiano Ronaldo.

Others would question whether he really scored over 1,000 goals, making it into the Guinness World Records.

Johan Cruyff, the Dutch star who won the prestigious Ballon d’Or football award three times, would disagree with such superfluous arguments about my hero.

“Pelé was the only footballer who surpassed the boundaries of logic,” he said.

One day, I believe, somebody may well top Pelé’s accomplishments. But no footballer can ever claim to have exemplified the hopes and dreams of Africans in colonial times — the long, difficult and bloody years, when we desperately wanted to see and appreciate a supreme manifestation of Black identity.

Today, first and foremost, Pelé must be remembered as an extraordinary human being, a Black man who exceeded all expectations in a world shaped and devastated by the legacies of slavery and white supremacy.

He may be gone, but the spirit of Black excellence he embodied will persevere forever.

The author is a social and political commentator.