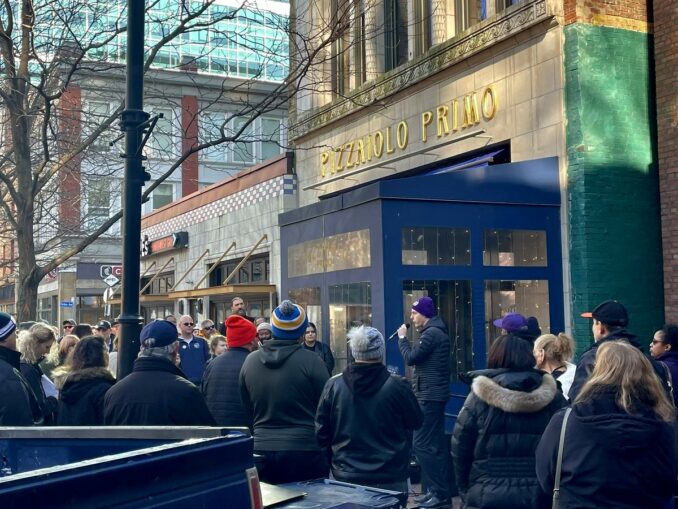 The paper’s owners, Block Communications, suddenly quit paying pension and health care contributions in the fall, then terminated all health coverage Oct. 1. Block also owns the Toledo Blade in Ohio and a half dozen TV stations in Ohio and Kentucky.

According to a CWA District 2-13 press release: “The workers, who are responsible for designing, printing, distributing, advertising sales and accounts receivables at the newspaper, have been working without a collective bargaining agreement since March 2017. . . . the workers have not had a pay raise in 16 years. . . .

“Block Communications, the owners of the Post-Gazette, refused to pay an additional $19 per employee per week to maintain the existing coverage. The workers currently pay over 8% of their wages toward insurance premiums, amounting to approximately $7,300 per year. Out-of-pocket costs for the high-deductible plan proposed by the Company can cost a family as much as $14,400 or more per year.”

Striking workers continue to get the word out about their strike at Pittsburgh’s Market Square, and they started a strike newspaper, the “Pittsburgh Union Progress.” Other union locals in the newspaper industry have been making donations to the unions in Pittsburgh to help the strikers with health care and other needs.

CWA 14827, formerly Pittsburgh Typographical Local 7, is one of the oldest continuous unions in the U.S., founded in 1852. Newspapers are one of the first industries to have been organized.