In analyzing the heroic 1992 Los Angeles Rebellion, Sam Marcy, the late chairperson of Workers World Party, wrote in the pamphlet: “A Marxist Defense of the L.A. Rebellion” that “Marxism differs from all forms of bourgeois sociology in this most fundamental way: All bourgeois social sciences are directed at covering up and concealing — sometimes in the most shameful way — the predatory class character of present-day capitalist society.

“Marxism, on the other hand, reveals in the clearest and sharpest manner not only the antagonisms that continually rend asunder present-day bourgeois society but also their basis — the ownership of the means of production by a handful of millionaires and billionaires.”

When it comes to class antagonisms, U.S. prisons under capitalism do not rehabilitate but are instruments of oppression and exploitation. When one is locked behind the walls — which in the U.S. includes an estimated 2 million people in jails, prisons and detention centers — horrific conditions are covered up and concealed on a daily basis — that is, until a crisis of some kind sparks a rebellion or some other form of protest. 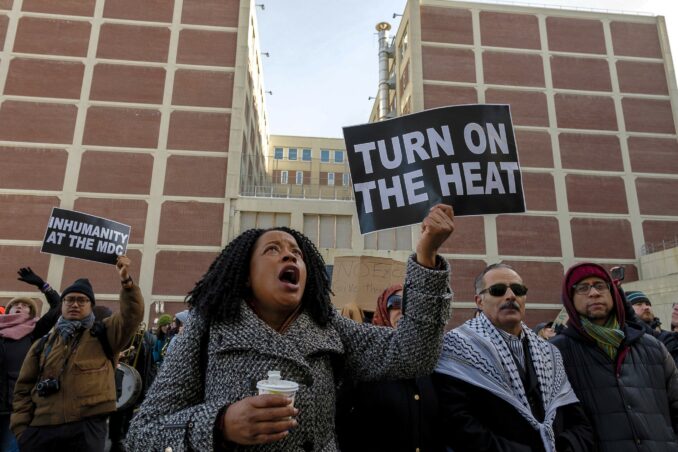 One such crisis causing an outcry from incarcerated people and their outside supporters is the unprecedented below-freezing temperatures gripping much of the country — no matter the region — due to climate change.

It is bad enough that incarcerated people face inhumane conditions, including being locked down in tiny cells 23 hours a day, poor sanitation and medical care, unhealthy food, verbal and physical assaults by guards, solitary confinement and more.

Adding to this list is the lack of heat. While people have died needlessly from the impact of winter storms, due to a lack of preparedness on the part of local governments as in Buffalo, New York, incarcerated people are facing even more dire conditions, with little to no attention paid to them.

At the Clayton County Jail in Georgia, there was no power for at least three days, along with low water pressure and bursting pipes, in late December. The word finally got out about this situation, when a prisoner informed his mother during a phone call.

At least 700 of over 2,400 migrants attempting to cross the Rio Grande at the El Paso, Texas, border were detained by the U.S. Border Patrol and left outside in freezing conditions in early December. Migrants were only provided with aluminum blankets by the Patrol.

Retaliation in response to complaints

In early 2021, reports exposed that any migrants who complained about lack of heat in detention camps in Texas and Louisiana faced retaliation by guards. The processing centers are under the auspices of Immigration and Customs Enforcement, an arm of the federal government, but they are operated by private Wall Street prison firms like the GEO Group. And prisons in the Deep South are notorious for being modern-day plantations, driven by blatant white-supremacist guards and wardens.

Lucia Allain, a spokesperson for the Refugee and Immigrant Center for Education and Legal Services (RAICES), had been in contact with Ubaldo Ochoa Lopez, who was detained at the South Texas ICE Processing Center located outside San Antonio. She learned that guards had deliberately turned off the heat.

Lopez told Allain, “The officers are turning on fans to make it colder. If they’re hearing complaints like, ‘Oh it’s cold in here,’ they’ll be like, ‘It could be worse’ and turn on fans.” (theintercept.com, Feb. 19, 2021)

Lopez told her that ICE agents have even thrown blankets into the garbage after detainees complained.

Withholding heat is a form of torture

At a Pine Prairie, Louisiana, ICE detention center, during the same time period, prisoners were denied heat in a segregation unit, separate from the rest of the heated facility, according to detainee Argueta Anariba. He told The Intercept, “There’s no heat, there’s nothing — we were eight people dying of cold. I’m asthmatic. I had terrible chest pain.”

Anariba wore three pairs of pants and three shirts and stayed wrapped in his sheets in his bed all day. His meals were cold by the time they got to the cell, and his bones ached.

Natalie Lerner, a paralegal with Proyecto Dilley, a pro bono legal services provider for detainees at the South Texas Family Residential Center, stated that the detention center run by the private prison company CoreCivic had periodically turned off heat, water and electricity for long periods of time. The detainees, including children, were getting sick living in dangerously close quarters during the height of COVID-19.

In late January 2021 in the Bergen County Jail in New Jersey, which holds ICE detainees, the Legal Aid Society, the Bronx Defenders and Brooklyn Defender Services wrote ICE that “At least one detainee had been told ‘the cold will kill the coronavirus, so we’re not turning it [the heat] on.’”

A whistleblower at Louisiana’s Richwood Correctional Center, which is run by the private prison firm LaSalle Corrections, told the Government Accountability Project that staff were ordered to turn up the air conditioning in order to hide COVID-19 cases. Detainee temperatures were taken from their foreheads to “freeze them out,” in order to manipulate the temperature readings so that deportation flights would accept people with fevers.

In a Feb. 22, 2021, Workers World article, anti-death penalty organizer Gloria Rubac wrote on the freezing conditions faced by Texas prisoners. One of those prisoners, Nanon Williams, told WW: “Our unit has huge windows. The freezing wind is blowing in because panes are loose, and some are missing. We are freezing.

“This prison is 112 years old and was falling apart before this latest disaster. We have no heat, no water, very little cold food. Dinner tonight was a piece of cornbread and some peanut butter. On the first freezing day, only 10 guards came to work. There are almost 2,000 enslaved people at the Ramsey Unit and over 400 employees.

“Heat was off for almost four days. Only then did we get an extra blanket. Almost everyone has had COVID at Ramsey, and the respiratory problems are still here. Coughing can be heard all over the place.” (workers.org/2021/02/54625/)

Every human being, including those who are languishing behind the walls, should have a guaranteed right to a job with a liveable wage, housing, food, education, health care and heat.

What is happening to incarcerated people during this winter crisis, exacerbated by climate change and the pandemic, is another painful reminder that incarceration is another class antagonism that cannot be reformed, as pointed out by Sam Marcy. Therefore prisons, along with the entire capitalist system, must be abolished.

Tear down the walls!

“A Marxist Defense of the L.A. Rebellion” can be read at workers.org/books.