This article was published Jan. 1, 2023, on the sites of La Pluma and Tlaxcala.

The working class in the United States burst into action in 2022. Warehouse workers at Amazon, baristas at Starbucks, prisoners, coal miners, nurses, teachers, graduate students and more organized and resisted capital. Many went on strike. 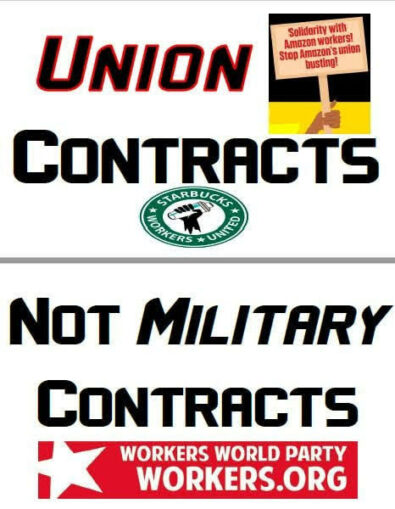 Will we in 2023 see ever sharper clashes between workers in the United States and the imperialist ruling class? Remember that these billionaire owners of U.S.-based monopolies and banks still dominate with the dollar, the weapons and the word. The politicians, bureaucrats and generals who serve them control the Treasury, the Pentagon and the police. Their media hacks and bought intellectuals wield the most effective propaganda machine in history.

That workers in the belly of the beast might wage class war seems impossible. Yet in 2022, class struggles took place that had been unseen in decades. Public opinion grew more favorable toward unions than in the last half century. A mood for confrontation grew, as people’s lives grew less stable.

A Gallup Poll in August showed that 71% of the population approved of labor unions. That’s up from 48% in 2008. It’s the highest since 1965, when over 30% of workers belonged to unions (now it’s about 10%). This happened despite constant anti-union propaganda over that same half century.

Amazon Labor Union scored a historic victory by organizing the first Amazon warehouse ever in the U.S. on April 1 in Staten Island, New York. The ALU ran an impressive multilingual, multicultural campaign that reached all the workers and won more than half to the union. In both anti-union monopolies, young workers predominate; most had never been in unions before.

The massive U.S. prison population is among the most marginalized. Yet in Alabama, 25,000 majority-Black, incarcerated people at 17 separate prisons withheld their labor in protest from Sept. 26 to Oct. 2. They condemned murderous conditions in the jails where they are forced to work. In their letters from the inside, organizers signed themselves “Alabama’s slaves” and said that the strike is “in protest of the continued institution of neoslavery.” (tinyurl.com/2bk43x3a)

In the fall of 2022, more than 70,000 education workers fought either for a union or for improved contracts. This included graduate students at the University of California, Boston University, Northwestern, Massachusetts Institute of Technology, University of Alaska and Yale.

At the New School, a college in New York City, adjunct instructors held a three-week strike and won a contract plus substantial back pay. Adjunct instructors have no job security or protection and, like graduate students, are the superexploited workers at the big universities.

Over 3,000 members of the Boston University Graduate Workers Union (BUGWU) celebrated a 98.1% election victory for their union on Dec. 7. Some labor researchers have characterized the 1,414 to 28 vote as “the most lopsided NLRB election win **ever** by a bargaining unit [of] more than 1,000 people.” (In the U.S., to be represented by a union, unless the boss voluntarily recognizes it, workers must win a vote managed by the National Labor Relations Board.)

Workers of color, women and gender-oppressed, LGBTQ+ and disabled workers are among the leaders of these historic class battles.

The mood of struggle spread from the unorganized to workers already in unions. One sector was the unionized nurses, members of the New York State Nurses Association. They were asked by their union leaders to authorize a strike against New York’s private hospitals. The vote pledges to go on strike if the existing contract expires before they reach an agreement with hospital management.

By Dec. 22, about 14,000 of the 17,000 NYSNA nurses had finished voting. Some 98.8% voted to authorize the strike. Nurses have been particularly hard hit by COVID-19 and other epidemics; hospitals have cut staffing to save on wages, and nurses have been forced to work longer hours and more shifts, under conditions dangerous to them and to the patients. Now the nurses are angry, united, and they believe they can win.

Railroad workers of all different crafts had been pushed to the wall by the railroad bosses, and their many unions went to the brink of a strike. This involves the freight trains, which carry enormous amounts of goods over vast distances. The workers move the same freight as they did in 1990, with about a third of the workforce. This creates enormous profits for the owners. The freight trains consist of hundreds of cars. Only one engineer and one conductor run these megatrains. The bosses want to cut that to one engineer, a dangerous step. On top of this, the railroad workers get no paid sick days.

Railroad workers rarely strike. A federal law, the Railway Labor Act, allows the government to intervene to stop strikes. It has done this in the past. Transportation of goods is essential to the national economy. This Nov. 30 the Joe Biden administration blocked the freight rail unions from striking. Biden and the Democratic Congress provided no sick leave to their contracts.

The Democrats pretend to be pro-labor. Biden’s anti-labor action exposed the role of the president and the Democratic Party as enemies of the working class, just as the Republicans are.

The prospect for worker upsurge still confronts many obstacles. Corporations have already bitterly opposed the workers through brutal union busting. They harass workers, fire some and bring court cases against unions. Capitalist owners and investors are desperate to pile up more profits within a system in perpetual crisis.

And workers face a government that is on a war footing, feeding arms to a proxy war against Russia in Ukraine and sending warships to the coast of China. Few weapons are more effective in combating worker solidarity than a patriotic propaganda campaign.

How workers in the U.S. will react as the economic and war crises deepen is hard to predict. For those of us in the U.S. who despise war, imperialism and all capitalist exploitation, there is no choice but to encourage the new combativeness among workers and help build solidarity among the entire working class.