A major Keystone oil spill of roughly 600,000 gallons occurred Dec. 7 in a creek in rural Washington County, Kansas, in the northwest region of the state. The Keystone spill is the largest in the history of that pipeline network; even more alarming is the fact that it was not a spill of conventional crude oil — problematic enough — but a product of the filthy Canadian tar sands, diluted bitumen, also known as “dilbit.” 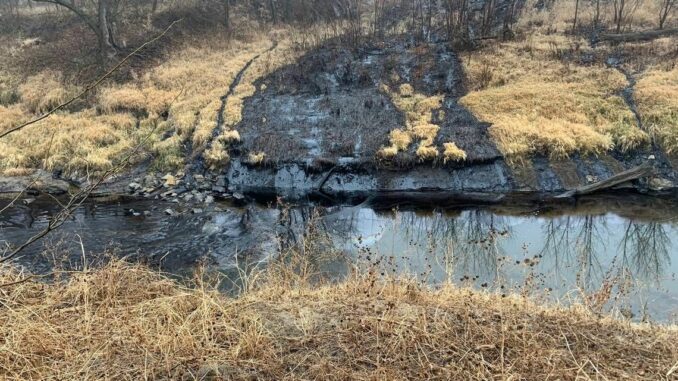 EPA photo of section of Dec. 7 oil spill in Kansas

Diluted bitumen is much harder to clean up than standard crude oil, because it is a much thicker, heavier substance. According to a recent report in the Topeka Capital-Journal, bitumen does not float on water as does standard crude oil, which leaves a short time to capture diluted bitumen from the surface of rivers and lakes. It disappears quicker from view compared to basic crude oil, and “most methods for trying to detect sunken bitumen don’t seem to work well.” (Dec. 15, 2022)

Jane Kleeb, a longtime anti-Keystone pipeline activist and founder of the pro-environmental group “Bold Alliance” stated in a Dec. 17 NPR interview: “When a tar sands disaster like this happens, it is worse than a traditional oil spill. Because tar sands are much more difficult, expensive and much more toxic to clean up. We know that this is going to take years.”

A similar spill of bitumen oil occurred near the Kalamazoo River in Michigan in 2010. Results showed the dilbit turned into a peanut butter-like material that caused severe damage in the surrounding area, especially to wildlife and habitats.

Capitalist greed is to blame

TC Energy, the company responsible for the spill, has been accountable for over 20 spills since construction of the Keystone pipeline in 2010. The Keystone pipeline runs from the Western Canadian Sedimentary Basin in Alberta to refineries in Oklahoma. It has been the target of many protests in the last 12 years, especially from Indigenous activists and area ranchers. TC Energy also owned the infamous Keystone XL pipeline, which was shut down in 2021 after years of protests and mass pressure.

Prior to the construction of the Keystone pipeline, TC Energy received a “special permit” from the Pipeline and Hazardous Materials Safety Administration (PHMSA) to generate portions of the pipeline at a higher pressure level than is ordinarily allowed under agency regulations for oil transport. (NPR, Dec. 17) This made the operation more profitable.

The fact that a Canadian corporation was able to force a U.S. government agency to “bend the rules” in a way that led to a major ecological disaster proves finance capital does not recognize the fictitious borders its state imposes on migrant families. This shows the disparity in how profit-driven corporations are coddled by capitalist politicians, when compared to the railroad workers who have had an unfair contract forced on them to prevent them from striking for basic sick days and safer conditions.

Settler colonialism and capitalist greed are the culprits responsible for this disaster and others of its kind. Collective actions and mass power were helpful in stopping the Keystone XL pipeline, and they can be again in halting more disasters like this.