On Dec. 19, 400 Texas National Guard soldiers were deployed in my hometown of El Paso to “assist” with the mass migration at the border with Juarez, Mexico. The state deployed these imperial special bodies of armed men as the city was anticipating the end of Title 42 on Dec. 21, which would allow more migrants to legally seek asylum. 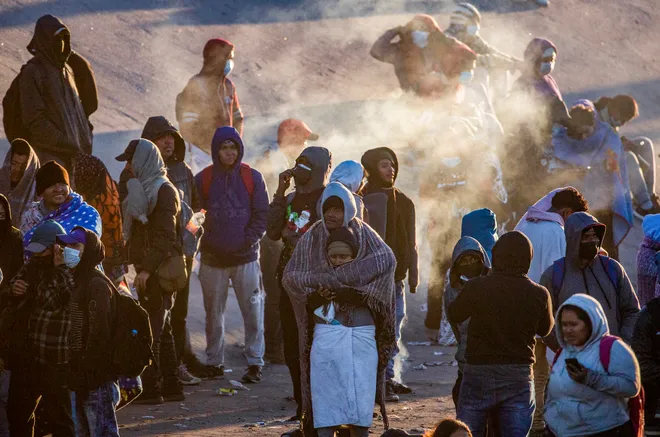 However, the Supreme Court intervened Dec. 19 and ruled to “temporarily halt the end of the Title 42 policy.” This allowed U.S. authorities to continue to arrest and expel migrants at the border, depriving them of attempting to gain asylum. On Dec. 20, the Biden administration asked the Supreme Court to terminate the policy but “requested a delay until at least after Christmas.” (PBS NewsHour, Dec. 20) With the legal and political wrangling, it could take months.

Thousands of people had left their families and traveled for months across dangerous terrain, with the hope of obtaining a better life upon arrival in the U.S., only to be denied entry and met with violent armed soldiers and barbed wire. Many migrants, including children, have had to sleep on the streets in Mexico as they await entry, or they must do the same thing once they are admitted to El Paso. If they do get across the border, migrants can be jailed on criminal trespassing charges under Texas’ inhumane laws.

Racist use of Title 42

Title 42 of the U.S. Government Code or the Public Health Service Act was originally codified into law in 1944. It allowed federal authorities to refuse entry of people and products into the U.S. if the surgeon general determined that they were coming from a country with a “communicable disease.” That authority was given to the director of the Communicable Disease Center in 1966. (Texas Tribune, updated Dec. 5) (The CDC was renamed the Centers for Disease Control and Prevention in 1992.)

In March 2020, the Trump administration invoked this statute relative to the spread of COVID-19, using it as a reason to allow authorities to deny entry to migrants at the Southern border. This racist policy specifically targeted people coming from countries such as Venezuela, Nicaragua, Haiti, Cuba, Ecuador and Peru; immigrants coming from Ukraine and some other countries were exempt from it. Meanwhile, the U.S. has had little to no COVID-19 restrictions for its residents and has been one of the major hot spots for the disease since its emergence.

The Biden administration has continued to uphold this vile policy, which has facilitated the arrests and expulsion of over 2 million people seeking entry in fiscal years 2021-2022. (BBC News, Dec. 21)

In July 2021, tens of thousands of Haitians arrived and camped under a bridge in Del Rio, Texas, days after the assassination of Haiti’s President Jovenel Moïse. They were “denied entry” under Title 42 and met with state violence and arrests. Border Patrol agents on horseback attacked them and yelled, “Go back to Mexico.” (NPR, Sept. 7)

The CDC signaled in April that it would lift the order, and Title 42 was set to end May 16. However, a federal judge blocked its termination, sparking a long legal battle. Many migrants have been waiting in Mexico since then for the statute to expire, so they would be allowed entry. The expiration date was moved to Dec. 21, but now it’s unclear when it will end, due to objections by 19 right wing-led states and the Supreme Court’s ruling. (Al Jazeera, Dec. 19) 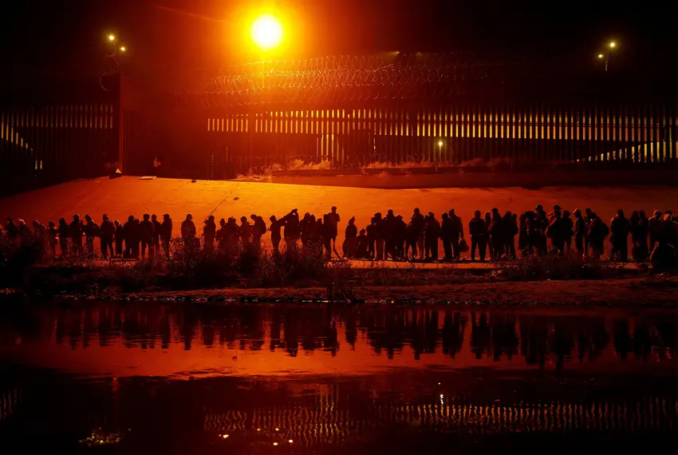 September: Venezuelans started to arrive daily by the hundreds in Ciudad Juarez, Mexico. Many were met with resistance and denied entry due to Title 42. Those who were able to come across were released by the Border Patrol into El Paso with no funds, leaving them to sleep in the streets.

El Paso spent $9.5 million in 2022 on providing services for refugees and migrants. (tinyurl.com/5ckkf8nb) Many migrants are crammed onto buses or sent to the airport to be shipped to New York, Detroit and elsewhere. At least one child drowned in the river while attempting to cross the border.

October: Thousands of people from Venezuela, Nicaragua, Columbia, Ecuador and Peru arrived at the border to seek asylum. Hundreds set up camp on the south bank of the Rio Grande in Juarez, as they awaited entry. The encampment met with police abuse in Juarez. A tent was burned, and people were dispersed.

Groups of migrants came into El Paso across the border highway and through sewage/water tunnels and over fences. Two people were struck by cars as they attempted to cross on the freeway.

December: Upwards of 20,000 people made their way into Juarez, with as many as 6,000 migrants attempting to cross into El Paso daily. Those who managed to make it across were left to figure out how to obtain a plane or bus ticket, or they would have to sleep on the streets. Many rely on cardboard to keep warm during the freezing nights.

The shelters and homes are overwhelmed. On Dec. 16, Mayor Leeser declared a state of emergency to request additional aid. Schools are now being repurposed as emergency shelters.

Texas National Guard troops set up military vehicles and barbed-wire fencing along the border areas, where people were congregating. Brandishing rifles, they have been abusively preventing people from entering the U.S.

The Trump administration implemented the Migrant Protection Protocols or Remain in Mexico policy (RMX) in January 2019. It requires single adult males, females and family units, who are seeking asylum by land at the U.S./Mexico border, to return to Mexico while awaiting their asylum hearings in the U.S. immigration court.

This harmful policy makes already vulnerable populations subject to unsafe and dangerous conditions at the border and denies them their right to seek asylum. Over 70,000 migrants have been forced to stay in Mexico while awaiting trial in the U.S.

President Joe Biden had suspended that program when he took office in January 2021, but lower courts reinstated the RMX policy after Republican-led lawsuits were filed from Texas and Missouri. It resumed in December 2021; on Aug. 8 a judge rescinded the order that had been in effect since then, and the Department of Homeland Security ended this policy.

But on Dec. 15, a federal judge in Texas blocked the Biden administration from ending the RMX program temporarily until the legal challenges by Texas and Missouri are settled.

On March 6, 2021, Texas’ misogynist, xenophobic Gov. Greg Abbott, along with the Texas Department of Public Safety, launched “Operation Lone Star.” According to a press release from Abbott, it integrates the DPS with the Texas National Guard and “deploys air, ground, marine and tactical border security assets to high-threat areas to deny Mexican Cartels and other smugglers the ability to move drugs and people into Texas.”

This inhumane, racist policy targets migrants and fast-tracks them to prison or deportation. Under it, police officers and soldiers racially profile them at the border and in surrounding counties. Migrants face ridiculous misdemeanor criminal trespassing charges (on stolen land), which are punishable by up to one year in jail.

Many migrants have been held in pretrial detention for months, without ever meeting with an attorney or having formal charges filed against them. At least 800 people are being held in Kinney County alone, awaiting trial.

Under this program, 10,000 law enforcement officers were deployed to the Texas/Mexico border to arrest asylum seekers trying to enter the country. They spent more time patrolling border counties, some of which are as far as 200 miles from the border. This repressive policy has only magnified the incidents of racial profiling and discrimination against Black and Brown people, which were already prevalent in Texas border counties. Millions of people have been detained at the border due to this criminal, unjust, white-supremacist decree.

Over $4 billion of Texas taxpayers’ money has been used to fund Operation Lone Star since its inception. One county in Texas, where many residents live below the poverty line and lack basic necessities, received $3 billion in funding — but it was specified only for Operation Lone Star.

U.S. imperialism at root of crisis

Over 1,350 deaths have been reported at the border in the last two years, although the number of those who lost their lives before they completed their journey is likely much higher.

Migrants are coming to the U.S. en masse because of the material conditions that have been created or exacerbated by global capitalism, climate destruction and war, perpetrated by the U.S. This violent, white-supremacist, hetero-patriarchal empire protects the property, wealth and power of the superrich.

The U.S. government proclaims this country is a “beacon of world democracy” and uses that claim as a reason to fund wars, invade countries, fortify coups and counterrevolutions. Meanwhile, many U.S. residents don’t have access to basic necessities such as food, housing, health care and education. The capitalist state cruelly denies entry to millions of desperate people, particularly those who are Black and Brown and are attempting to seek asylum in the so-called “greatest country in the world.”

No one is illegal on stolen land. People have a fundamental right to travel freely and live where they choose.