The author, a veteran of the liberation movement in Guinea and Cape Verde, is a regular contributor of articles on Africa to Avante, the weekly newspaper of the Portuguese Communist Party. This article was published Dec. 22, 2022. Translation: John Catalinotto. 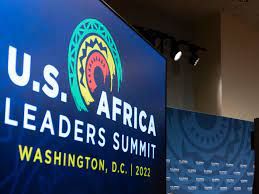 A “summit of leaders” between the United States of America and countries in Africa took place in Washington Dec. 13-15.

Leaders from 49 of the 55 African states were present. Excluded were Mali, Burkina Faso, Guinea and Sudan, because they were suspended from the African Union due to military coups in their countries; Eritrea, because it has no relations with the U.S.; and also Western Sahara, which is under Moroccan occupation.

The White House’s stated purposes in organizing the meeting, the first at this level since 2014, were to strengthen U.S. partnerships with Africa, by delivering on previous promises. But most observers believe that the main, unstated goals were to try to enlist African countries in the crusade against China and Russia, as part of the U.S. strategy of world domination.

From what is known, the results of the conclave were meager. The U.S. reaffirmed support for the admission of the African Union as a permanent member of the G20 and for securing a seat for the continent on the United Nations Security Council, if and when that body is enlarged. It was also announced that the U.S. has pledged to invest $55 billion in Africa over the next three years in various economic projects.

The promises were greeted with skepticism, as they had already been made before, during Barack Obama’s terms in office (2009-2017), and had never materialized. In fact, economic “aid” to Africa is insignificant, when compared to what Washington is currently giving to Ukraine or, even less important, when one considers that U.S. military spending in 2023 alone will amount to $858 billion — more than 15 times the promised U.S. investments in Africa over three years.

According to U.S. media, White House pressure on African leaders regarding China and Russia to try to respond to the “growing influence of Beijing and Moscow” on the continent has had no impact.

Senegal’s head of state and acting African Union chairman Macky Sall used the summit to criticize a proposed U.S. bill that seeks to counter alleged “malicious Russian activities” in Africa and threatens countries that maintain relations with Moscow with sanctions. If the bill becomes law, the Senegalese president assured, “it could severely damage the relationship between Africa and the U.S.”

Earlier, the 16-member Southern African Development Community (SADC) had vehemently voiced its opposition to such legislation, since that would mean the U.S. threatens African countries with “unilateral and punitive measures.”

Now at the Washington summit, referring to external pressures, Rwandan President Paul Kagame, who otherwise maintains good relations with Western powers, summed up the position of most African leaders: “I don’t think we should be bullied into choosing between the U.S. and China; we need to have both partners.”

The African peoples thus show that they have a historical memory. And they know, since they wish to avoid regressing any further, who their true friends are, who stood by them in their struggles for independence and who, today, continue to support them without imperial designs in the development of their countries.