A Dec. 11 New York Times report highlighted how thousands of public high school students in majority poor, Black and Brown districts are funneled into the U.S. military’s Junior Reserve Officers’ Training Corps program. Students are automatically enrolled and forced to participate as an explicit requirement without parental consent. Some high schools have saved money by using JROTC, which is ostensibly a feeder system for children to ultimately enlist in the military, as an alternative to hiring physical education or health teachers. (NY Times, Dec. 11)

More than 10,000 military recruiters stalk the hallways of high schools across the country with promises of a guaranteed job, health care, housing and a free college education. Poverty is one of the Pentagon’s most effective recruiting tools. Military officials explicitly acknowledge that young people’s inability to afford a college education is responsible for their success in meeting recruitment goals, and lawmakers warn that helping people pay off crushing student debt will hurt recruitment. Military recruiters exploit the student loan debt crisis to coerce youth into believing that enlisting is their only option. 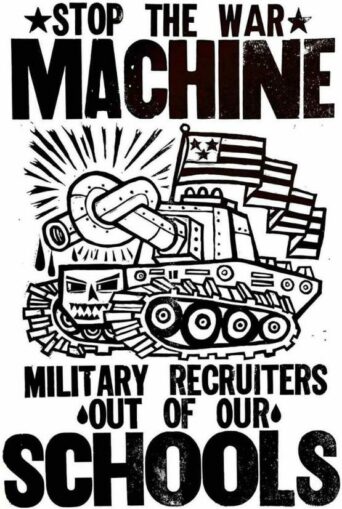 No one should have to invade foreign lands and kill poor Black and Brown citizens worldwide in exchange for an education. Defenders of mandatory JROTC enrollment cite the need to “divert students away from drugs or violence” and “the allure of drugs and gangs” in urban areas, while simultaneously corralling them into the single most violent gang on earth: the U.S. military.

The fact the U.S. military spends $400 million a year to lure children into that violent, predatory institution should come as no surprise. The U.S. government utilizes the cultural infrastructure to embed the military into almost all aspects of life and to promote militarism. From pledging allegiance to the flag to applauding veterans during halftime, it is nearly impossible to watch sports without billionaire-owned teams constantly idolizing war.

Military recruiters reach youth through video games, such as the popular “Call of Duty” franchise. The role-playing game teaches children to glorify guns and violence and then funnels them into the military to live out their murderous fantasies. Hollywood is the most prominent recruiter for the U.S. military; the Pentagon has spent billions on “heroic” war movies vilifying Russia, China and the Middle East. For example, the U.S. Department of Defense collaborated with Paramount Pictures to weave imperialist, pro-war narratives into the movie “Top Gun: Maverick.”

If military recruiters don’t capture poor kids in high school, they continue to prey upon low-income students in community colleges and public universities, such as City University of New York, where a majority of students are housing insecure. As a current CUNY student, my personal contact information was shared with military recruiters without my explicit consent. As a result, I receive an obscene number of emails, phone calls and text messages coaxing me to join the military and even to refer a friend.

The struggle to end the poverty draft is personal to me, not only because I’ve seen my students’ eyes light up at the thought of having stable housing and food for the first time in their life, but because I saw how my brother’s economic deprivation led him to join the U.S. Navy. At 18 years old, his partner had an unexpected pregnancy, and he found himself scrambling to find a job that would pay him enough to survive and support his newborn. As a college freshman at a State University of New York campus, he found the military to be his only option.

After witnessing my brother, cousins and students being recruited into the military — not because they were patriotic, but because they needed money to support themselves and their families, I realized that the U.S. military preys on vulnerable people by design and in the spirit of capitalism.

As the Western empire and U.S. hegemony decline, the capitalist ruling class grows desperate to maintain rising profits through brute military adventures. We can expect the U.S. military to further increase its deceitful targeting of poor and disenfranchised youth to serve as cannon fodder for the military-industrial complex. We must take our antiwar and anti-imperialist movement into the streets.

The only war worth fighting is class war.

The United National Antiwar Coalition has called for coordinated protests Jan. 13-23, 2023. To find or list an action in your area, go to unacpeace.org.