Philadelphia is known as the “City of Murals,” with over 4,000 works of community-based public art adorning outer brick walls of buildings in every neighborhood. The artworks are part of a “campaign by the city to repurpose public spaces and create positive dialogue in communities,” according to Mural Arts Philadelphia.

Yet since its inception in 1984, this government sponsored nonprofit, anti-graffiti program has never included a mural of Philadelphia’s most famous native son — no, not the fictitious Rocky Balboa — but real-life political prisoner Mumia Abu-Jamal.

Artists and activists supporting Abu-Jamal took it into their own hands to do something about this in advance of his Dec. 16 court date. With his appeals trial entering a critical phase around the 41st anniversary of his incarceration, they felt it important to “humanize” Pennsylvania’s most famous political prisoner. 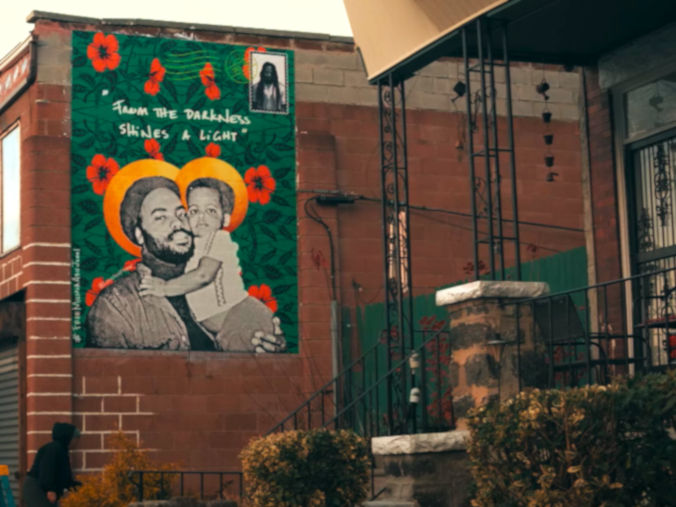 Lead artist Makeba Rainey and support crew Sam Rodriguz and Boris Bernard wanted to create an image for #LoveNotPhear of Abu-Jamal before his incarceration. They chose an older, personal family photo of him, but they included a picture of him today on a postage stamp at the top, to depict how incarcerated people communicate with the outside world through mail. The mural carries the message “From the Darkness Shines a Light.”

The mural appears on an outside wall of One Art Community Center on N. 52nd St. in West Philadelphia. Organizers reported traffic coming to a halt as drivers slowed down to take cell phone pictures of this incredible political art.

Visit Sunny Singh’s video at youtu.be/byWSY7Mkr-c to witness the production.