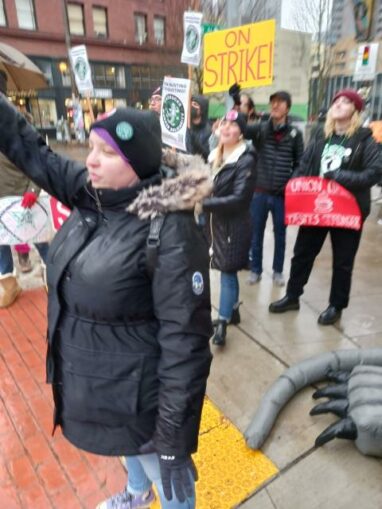 Union coffee is hot, and at this point the bosses must feel like they’re getting boiled. In November more than 100 Starbucks stores countrywide went on strike for three days; and over the weekend of Dec. 16-18, Starbucks Workers United (SBWU) did it again.

“This store has been unionized since last year, and Starbucks won’t bargain with us. We are demanding decent pay, so that we can be able to live in this city,” exclaimed a picket leader at a strike-picket in front of the Seattle Starbucks Roastery on Dec. 17. This was followed by chants of “No Contract, No Coffee! No Workers, No Starbucks!”

The coordinated strike involving 1,000+ workers protested Starbucks’ store closures, which are part of the company’s union-busting campaign. Seattle workers were particularly outraged when Starbucks recently closed its Broadway and Denny store; it was the first store to unionize in Seattle. But five other recently unionized stores here — in the original home of Starbucks — and many more across the country have been shuttered.

The SBWU strikes follow their nationwide solidarity rallies Dec. 9. “We won’t back down from this fight!” says a leaflet distributed at the mass picket. “We call for full staffing at all our union stores, for credit card tipping to be implemented across the nation and for these targeted closures to stop.” The workers at newly unionized stores have not been allowed credit card tips, which causes a big loss of income. Meanwhile nonunion stores provide for credit card tips — a blatantly discriminatory policy.

Droves of tourists from across the country and around the world were confronted with the militant picket at the Roastery, a big surprise. Many just stood across the street, and others were turned away. Two other Seattle stores were also part of the strike.

At least 10 stores in Oregon joined in the walkout. At the Macadam location in Portland, close to 30 people showed up to make their voices heard. One was Arthur Pratt, a transgender six-year employee from another location, who had been fired in Starbucks’ union-busting onslaught, sparking outcries from co-workers and the community. The company has been accused in the past of targeting pro-union trans employees by threatening their trans-affirming health benefits.

The primary demand expressed at the Macadam location, judging by some of the picket signs, was financial security. Alicia Flores, who has worked for Starbucks almost seven years, spoke on the stark divide between workers and upper management in the company. While upper management is insulated from having their hours cut due to being salaried, hourly workers frequently have their economic well-being threatened by unreliable schedules.

In addition, Flores says that managers rely on the age-old trick of selectively enforcing policies to discriminate against those who may unionize. “The system that we see throughout the campaign across the country is that people are getting fired for time attendance; and if you look at the record, it’s like two minutes, three minutes — when managers themselves are late all the time. There’s no accountability for someone that’s a salary employee, just the hourly employees.” Flores says this practice is “100%” union busting.

Despite having a predominantly warm reaction from the community, especially during this weekend’s strike, Flores called attention to a troubling classist notion that some customers have repeated: They don’t believe that baristas need a union.

Historically, some unions have made a critical error in trying to draw a distinction between “skilled” and “unskilled” labor. A Marxist analysis of capitalism shows us that all who sell their labor power to survive, whether mechanics, doctors or Starbucks baristas, belong to the same class with the same interests.

Any division of our class serves only to weaken us, while strengthening the capitalist class. Furthermore, it is the fundamental right of all workers to bargain collectively and improve their lot in life. Claiming to value democracy while opposing the right of workers to have a say in their day-to-day existence is like allowing someone to choose the size of their coffee cup but not what goes into it.

If you would like to contribute to the strike relief fund for Pacific Northwest Starbucks Workers, do so here: gofundme.com/f/PNWStarbucksWorkerRelief. 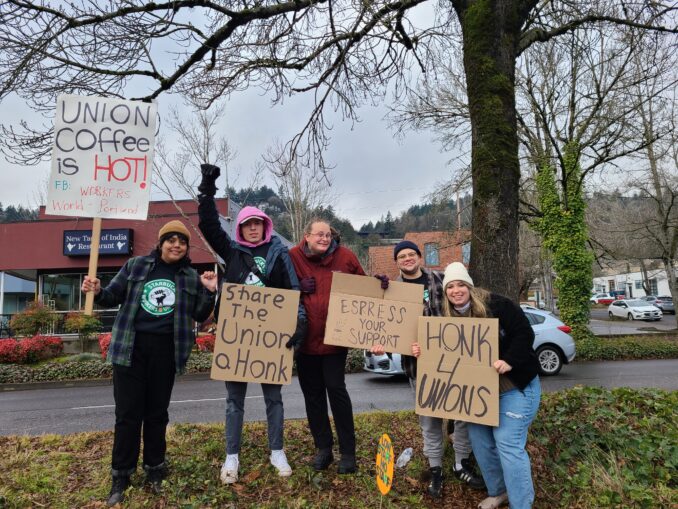