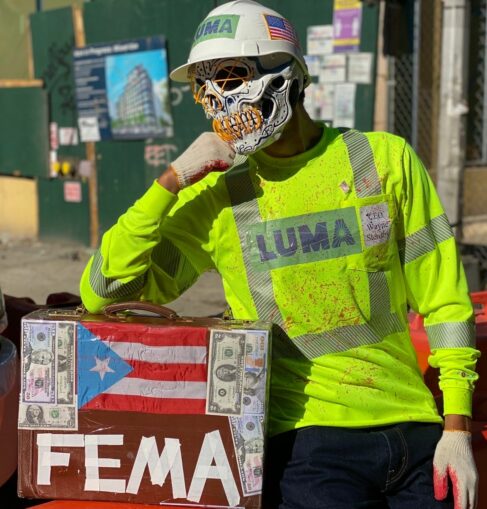 The Puerto Rico Not For Sale Campaign and their allies will be marching in costume in the annual Village Halloween Parade on Monday, Oct. 31, at 7 p.m. at Canal St. and 6th Avenue in New York City.

Representing some of the “terrors of colonialism,” participants in the contingent will be dressing as representations of the Fiscal Control Board, the vulture funds, crypto-colonizers like Brock Pierce, environmental destruction and LUMA Energy.

Puerto Rico has been living in a state of terror under United States colonialism, whose symptoms grow worse by the day. Not even the legendary El Cuco or the chupacabra are scarier than the horrific austerity measures the Fiscal Control Board, imposed by the U.S. government, has had on the archipelago.

Most recently, the Fiscal Control Board agreed to a $23 increase on Puerto Ricans’ electricity bills for the next 50+ years to pay off the cost of the debt of the Electrical Energy Authority.

This increase is in addition to the seven increases LUMA Energy has imposed since privatizing the electric grid in June 2021 and comes after over a month of power outages in some parts of the archipelago due to Hurricane Fiona.

These power outages resulted in the deaths of multiple people through explosions of generators, fires from candles, lack of power to hospitals and nursing homes, and suicides.

Now more than ever, we must confront these terrors head on, shining a light on colonial shadows and exposing them for the monsters they truly are, so that we can defeat them. The only solution is independence and national sovereignty for Puerto Rico.