The people of Brazil have shown remarkable courage, in the face of extreme right-wing terror, in voting to oust fascist President Jair Bolsonaro. Former president and labor leader, and candidate of the Workers Party (PT), Luiz Inácio Lula da Silva defeated Bolsonaro by over 2 million votes. 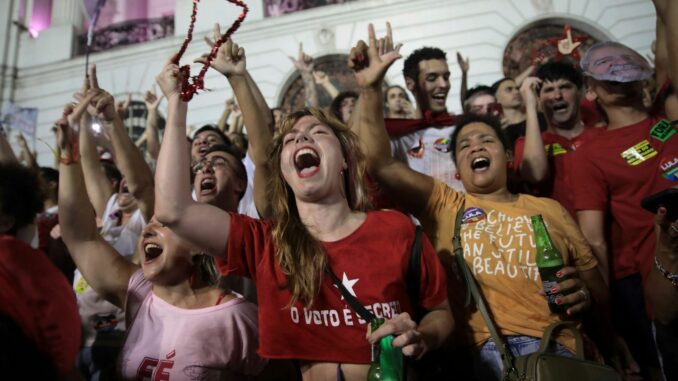 Lula, as he is affectionately known, had 50.9% of the vote to Bolsonaro’s 49.1% in the Oct. 30 runoff election, held after the Oct. 2 general election with its numerous candidates, which ended with no single candidate getting more than 50% of the vote.

Lula had the strongest support — over two-thirds of the vote — among poor, rural voters in the northeast part of Brazil. When Lula was president from 2003 to 2010, poverty was reduced, but that has shot up under Bolsonaro since his Jan. 1, 2019, inauguration.

Bolsonaro had essentially declared war on the 300+ Indigenous communities of Brazil, vowing to impose hydroelectric dam projects and other developments that threaten their culture and sovereignty. Under Lula and Lula’s successor Dilma Rousseff, 100 new Indigenous territories were established. This compares to zero under Bolsonaro and his predecessor Michel Temer, who replaced Rousseff when she was impeached.

The International Work Group for Indigenous Affairs reported that Bolsonaro’s government “has been responsible for one of the most significant setbacks in the demarcation of Indigenous Lands, promoting an integrationist vision that focuses on ‘civilizing’ the Indigenous Peoples.”

Anti-Black police violence is widespread, prompting a Black Lives Matter movement in Brazil, where 15 million people in the most recent census identified as “African” and 43% of the country’s 212 million people as “mixed race.”

Bolsonaro is a Brazilian version of Donald Trump. His approach to the COVID-19 pandemic mirrored that of the U.S. ultrarightist, leading to almost 700,000 deaths. Like Trump, Brazil’s defeated president has shown disdain for the environment and the climate crisis, promoting deforestation in the Amazon. Under Bolsonaro, more than 16,000 square miles of the Amazon was destroyed, an area larger than Switzerland, according to Brazil’s National Institute for Space Research, which tracks fires in the Amazon. (npr.org, Oct. 28)

Pro-Bolsonaro elements employed violence and intimidation in an effort to shift the outcome of the election. Multiple PT campaign workers were assassinated; journalists covering the election, especially women, were repeatedly harassed. In the northeast, the Federal Highway Police set up blockades Oct. 30 that prevented busloads of rural voters from getting to the polls. This was a violation of orders issued by the Superior Electoral Court barring such actions.

This is the climate in which Lula will take office. Implementing his promised reforms will be difficult, with the makeup of the legislature where Bolsonaro’s conservative allies hold a majority. And a fascist coup attempt remains a possibility, given Bolsonaro’s large base of support, demonstrated by the election results. Brazil was under a U.S.-backed military dictatorship from 1964 to 1985.

As with the recent elections of leftist presidents Xiomara Castro de Zelaya in Honduras and Gustavo Petro in Colombia, Lula’s electoral victory does not mean the working class now holds state power. These progressives hold office but capitalism and imperialism have not been overturned. That creates an ever-present danger of a right-wing backlash and puts limits on what any president can do.

Nevertheless, the election of Lula in a climate of extralegal and state-sponsored terror is a positive result. Lula is expected to reverse Bolsonaro’s policy of open hostility toward the governments of Venezuela, Bolivia and Cuba. Lula offers hope for the workers, especially for the poorest and most oppressed.

With Brazil the fifth-largest country in the world area-wise, and the seventh-most populous, this development has ramifications for the global working class. Significant gains, however, will require a continued mobilization of that sector of Brazil’s population that elected Lula.