At a loud and angry rally outside this city’s federal building, organized by the Haiti Action Committee (HAC), speaker after speaker made it clear that no U.S. intervention would be tolerated.

Robert Roth, a member of HAC, opened the rally with a short history of U.S. and United Nations occupations and intervention in Haiti. He charged that the U.S. is contemplating sending troops to put down a new uprising of the Haitian people. Roth cited the current economic crisis, with the rapid and intolerable inflation of gas and food prices, as a major cause of the current uprising. 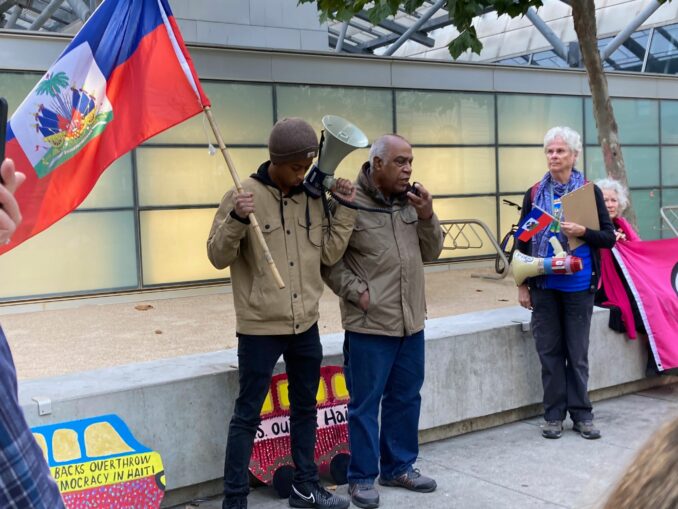 Pierre LaBossiere, co-founder of the Haiti Action Committee, speaks out about the uprising of the Haitian people.

According to LaBossiere, the economic crisis in Haiti is spiraling out of control. Many workers make less than $3 a day, and gas prices in some places are approaching $20 a gallon. “How can they live? How can they survive on so little money?” he asked. “But the people are energized, they are demanding a change,” LaBossiere noted.

The Haitian activist called for an end to the deportations of Haitians. He accused both the U.S. and the U.N. of creating a “burning house” that Haitians are forced to flee. When the Haitian people try to come to the U.S., according to LaBossiere, they are thrown back into the burning house that is Haiti.

Speaker after speaker, from such groups as Black Alliance for Peace, Veterans for Peace, Committee in Solidarity with the People of El Salvador, Workers World Party, ANSWER and Code Pink, spoke out against any U.S. or U.N. military intervention and reiterated the call for freedom for the Haitian people.

Today’s demonstration was in response to an international call for protests against possible U.S., Canadian or U.N. intervention in Haiti.