The following letter calls upon Sacha Llorenti, Secretary General of ALBA-TCP, to warn CARICOM-Caribbean Community member nations that the threat of U.S. intervention in Haiti is a threat to the sovereignty of the entire region. The letter is signed by various Caribbean and Latin American solidarity organizations. 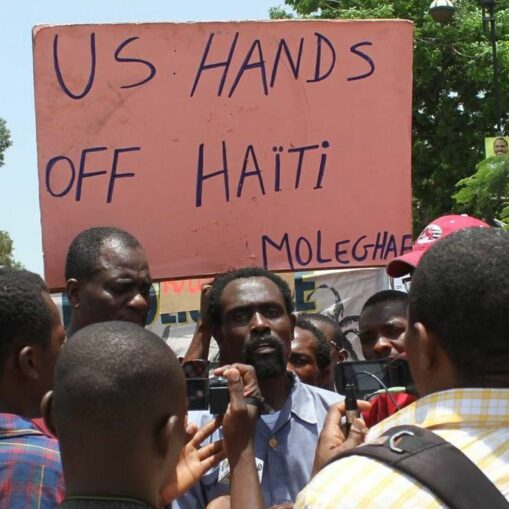 We write to you today to warn of a grave threat to the Caribbean region generally and the Bolivarian Alliance for the Peoples of Our America — Peoples’ Trade Treaty in particular.

You, as ALBA’s Secretary General, are in a key position to warn CARICOM member nations of the peril and pitfalls of going along with the U.S. effort.

The United States of America has begun a campaign to base its armed forces in Haiti for at least a decade, thereby establishing yet another precedent for violating the sovereignty of Latin American nations and creating a forward position for aggression against regional popular uprisings and ALBA member nations, particularly Cuba and Venezuela. This is Washington’s fourth invasion of Haiti in a century. Since 1804, one excuse after another has justified decades of U.S sanctions on Haiti.

It appears that China and Russia will block Washington’s gambit to get [United Nations] U.N. Security Council approval for another military occupation of Haiti. Luis Almagro is not likely to gather the 23 votes necessary to trigger the military intervention clause of the OAS “InterAmerican Charter.” [Almagro is Secretary General of the Organization of American States.]

However, the U.S. may try to form a Caribbean alliance similar to their tactic to provide a fig leaf for its 1983 invasion of Grenada.

The U.S. currently has no other way to get its troops into Haiti, which is a pilot case for implementation of the U.S. Global Fragility Act. It aims precisely to station U.S. troops in various countries on a bilateral basis, all under the guise of “humanitarian” aid.

The plan has already made headway, creating a grave situation. The U.S. has convinced the United Nations Security Council to place Haiti once again under Chapter 7 control, hence stripping Haiti of its sovereignty. Furthermore, like the U.S., the Security Council has begun placing sanctions on individuals in Haiti, as the U.S. has done against individuals in Venezuela, Nicaragua and Cuba.

This is a gross violation of Haiti’s sovereignty and a threat to the sovereignty of every country in the region.

Thank you for your attention to this urgent matter.