It has been just over 40 years since Mumia Abu-Jamal was subjected to a racist frame-up and unjustly sentenced to death row. The Court of Common Pleas of Philadelphia held a hearing on his case Oct. 26, where Judge Lucretia Clemons was scheduled to render her decision on whether the new evidence found in December 2018 was sufficient to warrant a new Post-Conviction Relief Act (PCRA) hearing. 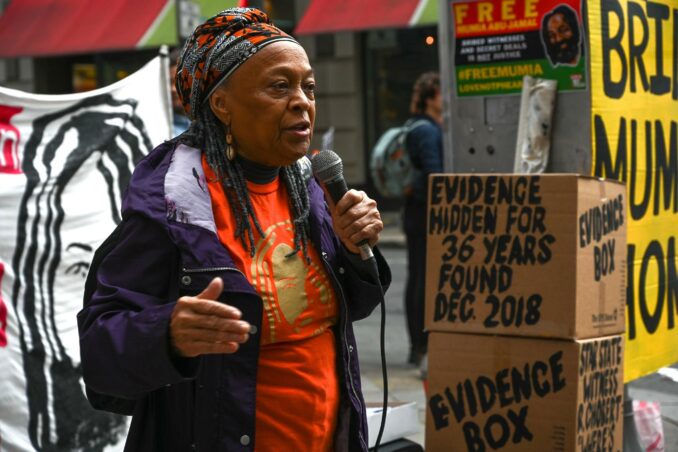 Outside the court building, over 100 demonstrators kept up a spirited rally for almost four hours. The atmospheres inside the courtroom and outside were like night and day. Inside the court, it was clear the state’s intent was to bury the truth and continue to suppress evidence of the blatant racism that has permeated this case. Outside, powerful oppressed and working-class speakers, of all nationalities, spoke truth to power — exposing the racist and class-based oppression of the court system and the capitalist state.

A Black Panther Party veteran, community activist and revolutionary journalist, Mumia Abu-Jamal was framed for the murder of a Philadelphia cop. As a result of police, prosecutorial and judicial misconduct in a highly contested trial, Abu-Jamal was given the racist death sentence in July 1982. Since 1981, he has been incarcerated under inhumane and illegal imprisonment — including 29 years in solitary confinement on Pennsylvania’s death row.

But the court hearing did not consider any of these points, as Abu-Jamal still sits behind bars.

Judge Clemons only considered three narrow arguments, based on evidence found in 2018 in six hidden file boxes in the District Attorney’s office, which had never been previously disclosed to the defense. A letter from the prosecution’s key witness, Robert Chobert, to Prosecutor Joseph McGill indicated Chobert expected to receive money from the Commonwealth in exchange for his testimony. McGill extensively tracked and monitored another key witness, Cynthia White, whose pending criminal cases were all dropped following her testimony for the prosecution.

The defense petition also documented the abhorrent and unconstitutional practice of striking Black jurors from Abu-Jamal’s original trial in 1982. McGill’s handwritten notes, found in the hidden files, showed he was tracking prospective jurors by race.

Clemons delayed hearing Abu-Jamal’s petition, while she heard several cases involving parole violations. When she finally opened the hearing on Abu-Jamal’s appeal, the defense attorneys and the prosecutor were asked if they had additional points to raise.

Judith Ritter, Sam Spital from the NAACP Legal Defense Fund and Brett Grote  from the Abolitionist Law Center represented Abu-Jamal. Assistant District Attorney Tracey Kavanagh was scheduled to represent the state, but ADA Grady Gervino appeared instead. Gervino has a reputation as a hack who argues for procedural barriers to avoid any claims with merit, which works to prop up corrupt decisions that have enabled decades of police, prosecutorial and judicial misconduct.

Judge Clemons dismissed the documented request for money by the state’s eyewitness Chobert as not “being material,” meaning it would not have affected the jury’s verdict. She dismissed all the records showing that McGill had dropped existing cases pending against Cynthia White as irrelevant. In doing so, Clemons is following in the footsteps of her predecessor, “Hanging” Judge Albert Sabo, who prevented evidence questioning Chobert’s and White’s credibility from being heard during Abu-Jamal’s earlier PCRA hearings.

At the time of the shooting that Chobert claims to have witnessed, he was on probation and did not have a license to drive his cab. Photos from the Philadelphia Bulletin, taken by photographer Pedro Polakoff, prove that his cab was not parked directly behind the officer’s car, as he had claimed. But PCRA hearings allow judges to dismiss critical evidence through a time-bar limitation clause.

In 1981, Polakoff offered his photos as evidence to the prosecutor, who never used them. As a result, the photos were never shown in any court hearing. (Polakoff’s photos are available at tinyurl.com/yemaszuy.)

At a 1996 PCRA hearing before Judge Sabo, Veronica Jones, a police informant who was working as a sex worker at the crime scene, testified that police had coerced her and Cynthia White to claim they had witnessed the shooting, even though they were nowhere near the scene. Sabo had Jones jailed immediately after the hearing ended.

Striking Black people from the jury

The most disturbing of Clemons’s actions was her dismissal of the claim that Black potential jurors were struck from the jury on procedural grounds, without addressing the merits of the claim. Noelle Hanrahan from Prison Radio stated: “Clemons adopts the prosecution position that the defense had the opportunity to receive these notes by merely asking the prosecution or cross-examining ADA McGill in prior court proceedings.

“This is a key and deliberate misreading of the record. At no time were these crucial notes and the motivations that guided ADA McGill ever available to the defense. McGill struck Black jurors at a 71% rate, significantly higher than the strike rate for white jurors. His reasons for seating some white jurors and not seating nonwhite jurors were not on the record; they were in his notes.”

Clemons ended the hearing by producing a 31-page notice of her intent to dismiss the defense petition. Abu-Jamal’s attorneys were given 20 days to respond, after which the Commonwealth has 10 days to reply. The next court date is set for Dec. 16.

Prohibiting a new hearing denies Abu-Jamal’s attorneys the opportunity to question Chobert and McGill about the newfound evidence. By upholding Sabo’s patently unconstitutional misconduct, Clemons is showing that racism reigns unabated in the U.S. justice system. Her decision exposes how the cops, courts and prosecutors have conspired to make sure the truth in this case doesn’t see the light of day — in particular, the issue of racism in jury selection.

Peoples’ Corner – taking over in the spirit of our people

Meanwhile, outside the courthouse, activists and supporters of Abu-Jamal established a “Peoples’ Corner” and rallied for close to four hours, providing political education to all who listened. Supporters came on buses from New York City and northern New Jersey, while others drove from Washington, D.C., and Detroit. In several U.S. cities and in Mexico and Europe, people held watch parties to view the live stream video provided by Sunny Singh on Mobilization4Mumia’s Facebook page. (tinyurl.com/2p7385xh)

The rally ended when those in the hearing came out to give a report. Johanna Fernandez, with the Campaign to Bring Mumia Home, explained what happened inside: “What we see emerging is that this lower court is taking as facts and truth the evidence and findings of the original prosecutor, the police and lower courts — corrupt to the core, who concocted, manufactured and hid evidence.

“Because of the laws of this country, this judge is accepting as fact those findings of the lower court. Yet of the 35 police officers involved in this case, 15 were subsequently convicted of manufacturing evidence and framing people the courts convicted. We have the proof in the training tape made by prosecutor Jack McMahon that district attorneys were instructed how to limit participation of Black jurors.

“We saved Mumia in the streets. We need to continue to do that.”