This October marked the 60th anniversary of the Cuban Missile Crisis — when the U.S. and the Soviet Union were on the brink of a global nuclear war. The current conflict between the U.S. and Russia, brought on by U.S./NATO use of the war in Ukraine to promote a broader war against Russia, contains many similarities. 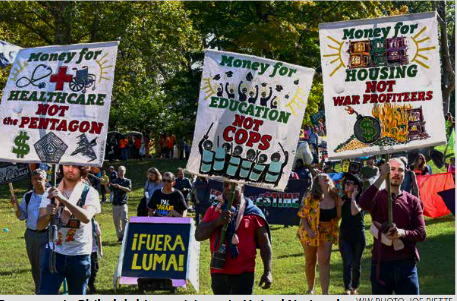 NATO kicked off its annual “Steadfast Noon” operation on Oct. 17 to test its ability to wage nuclear conflict; the target of this operation was Russia. U.S. nuclear-capable B-52 bombers now flying to Europe from U.S. bases are practicing dropping nuclear weapons on Russian targets. Other planes from European air bases are practicing deploying NATO nuclear weapons against Russia. These “war games” leave Russia little choice except to respond with its own nuclear exercises.

Just as Cuba was not the danger to global peace 60 years ago, Russia is not today. The threat comes from the Biden administration and its NATO allies.

Yet corporate media pundits, with increasing frequency, repeat President Joe Biden’s statements that imply a nuclear threat comes from Russian President Vladimir Putin. At a fundraiser Oct. 6, Biden claimed Putin “talks about potential use of tactical nuclear weapons or biological or chemical weapons, because his military is . . . significantly underperforming.” Biden ended his remarks stating: “I don’t think there’s any such thing as the ability to easily use a tactical nuclear weapon and not end up with ‘Armageddon.’” (Guardian, Oct. 7)

This statement from a sitting president of the only country in the world that has actually used nuclear, biological and chemical weapons against other countries cannot be taken lightly.

Russia, on the other hand, is not carrying out nuclear war games against the U.S. or any other NATO country. Putin had mentioned nuclear war in his televised address Sept. 21, when he accused the U.S. and NATO of engaging in “nuclear blackmail”; he was referring to statements made by representatives of leading NATO countries about possibly using nuclear weapons against Russia. These statements included those made by the former British Prime Minister Liz Truss. Putin was simply asserting Russia’s right to defend itself, if the country’s territory was threatened.

Both Russia (then part of the Soviet Union) and the U.S. signed the 1968 Nuclear Non-Proliferation Treaty, along with France, Britain and China, which also have nuclear arsenals. Israel, a close U.S. ally, has never signed the accord, however, even though it has a nuclear arsenal.

In 2019, then-President Donald Trump withdrew the U.S. from the Intermediate-Range Nuclear Forces Treaty. And Biden has not resurrected this treaty.

Russia published a doctrine that spells out the “exceptional circumstances” under which they can use nuclear weapons. (from remarks by Scott Ritter, Scheerpost, Oct. 20) Biden, like Trump, follows policies set by his predecessors.

The published U.S. nuclear doctrine includes a policy of nuclear preemption, established by former President George W. Bush. This policy considers nuclear weapons as just another military tool, to be used when needed. In 1969 then-President Richard Nixon openly threatened to use nuclear weapons against Vietnam to end that war.

Nixon used chemical weapons in Vietnam, including the highly carcinogenic Agent Orange. Bush used Depleted Uranium-coated ammunition during his devastating war in Iraq, leaving Fallujah and other areas permanently radioactive with uranium dust. He accidently admitted it was a “wholly unjustified and brutal invasion,” when he said Iraq instead of Ukraine during a speech in May.

And while the U.S. has participated in global conventions to ban chemical warfare, Washington never signed on to the articles prohibiting the use of chemical weapons, which it has used repeatedly in Iraq, Afghanistan and Syria.

As a candidate, Biden had promised to reduce U.S. arms sales. But a report by the Quincy Institute for Responsible Statecraft (Qi), released Oct. 21, found that U.S. arms sales have increased under Biden, with weapons even going to countries the U.S. considers “repressive regimes.”

War has become the lifeblood of 21st century capitalism. Weapons manufacturing provides the highest profits, as long as there are conflicts between countries to be exploited. The working class continues to pay the price, as politicians drain funds from domestic spending programs to finance expanding wars.

Pushed to accept cuts in benefits, wages and slashed pension funds, workers are increasingly fighting back with general strikes in Britain, France and elsewhere. Just imagine how powerful these worker actions could be if they included “No more wars!” as one of their demands.