Four regions that were formerly part of Ukraine — the Peoples’ Republics of Donetsk and Lugansk (collectively known as the Donbas region) and the regions of Zaporizhzhia and Kherson — have voted overwhelmingly in a historic referendum to formally join the Russian Federation. 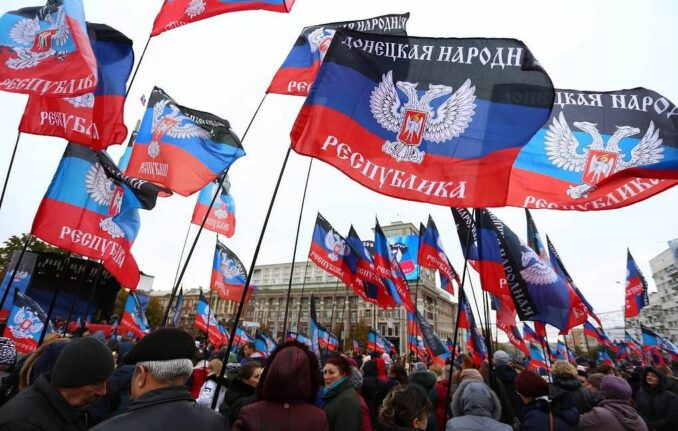 People at a rally in the Donbas Region fly flags of the Donetsk People’s Republic.  Credit: Alexander Kravchenko / TASS

Two of these regions, the Peoples’ Republics of Donetsk and Lugansk had voted in favor of independence from Ukraine in 2014. At that time non stop shelling from the Kiev coup government was killing thousands.

The shelling followed a U.S./NATO-backed coup dubbed the “Maidan Revolution,” in which neo-Nazi forces played a key role. Ukrainian armed forces have been routinely violating the Minsk cease-fire agreements, put in place in 2014 and 2015 — despite the fact that the United Nations Security Council adopted the agreement unanimously in Resolution 2202. For years, the Ukrainian government has not recognized the Peoples’ Republics and has continued its  attacks, killing over 14,000 people.

The latest referendums were aimed at choosing not just independence from Ukraine but joining with Russia. Many inhabitants of the regions are ethnically Russian or are Russian-speaking and have faced persecution by the Kiev regime. There are indications that most of the people in these regions are hoping the vote to join Russia will bring an end to the fighting, at least in their hometowns, and that no other options exist that will accomplish this.

Voting took place from Sept. 23 to 27 at designated polling places, as well as mobile door-to-door voting to ensure access to those who could not leave their houses, such as elderly or disabled people or people who did not feel safe leaving, due to continued shelling from Ukrainian forces.

Independent journalist Patrick Lancaster interviewed Albina Afenchenko, chairperson of polling station #11 in Donetsk about the voting process. “Every resident in the Donetsk Peoples’ Republic has the right to vote. Even people from other districts can vote here, in the Kalininsky district. We all know that it’s not safe in frontline villages. People are afraid to live there, so they live here. That’s why people can show their passports where their places of residence are indicated.”

Afenchenko explains that voters must submit an application and can be held criminally responsible for voting more than once. Voting was accessible to all residents, regardless of whether they held a Russian, Ukrainian or Donetsk passport.

The U.S. media and its allies have predictably been slamming the referendums as “staged,” claiming that Russian soldiers were intimidating citizens who were in favor of remaining a part of Ukraine from voting. Many people find accusations of election fraud and voter intimidation from the Ukrainian government ironic, since its military continued to bomb civilian areas of voting regions while the vote was taking place.

The U.S. corporate media has characterized the referendums as a sham. But Washington and the U.S. media have never been the authority on free and fair elections. There was no referendum for residents of Mexico to join the U.S. after roughly half the country was annexed through military conquest in 1848. There were no referendums for Indigenous peoples who were torn away from their lands, which the U.S. government claimed as its own in the process of ongoing genocide spanning from 1492 until today.

Once the referendums are ratified and the regions become accepted as official territory of the Russian Federation, then the Russian armed forces have an obligation to defend this territory the same as they would defend any other part of Russia. At that point, Ukrainian attacks on the people of these regions will be treated as attacks on Russia itself; this could mean a full-blown war. This might deter more Ukrainian attacks, which explains why so many residents looked forward to the vote for many years and are now celebrating.

The danger remains that this could escalate to a potentially nuclear level, if the Ukrainian government and NATO choose to not respect the vote and to continue to shell the regions or attempt to seize them.

As a desperate response to the referendums, Ukrainian President Volodymyr Zelensky submitted an expedited application to join NATO. The application was rejected, as Ukraine’s bids to join NATO have been in the past. NATO Secretary General Jens Stoltenberg said, “NATO is not a party to the conflict, but it provides support to Ukraine so it can uphold its right for self-defense.” Stoltenberg’s approach was shared by U.S. House Speaker Nancy Pelosi.

Rather than hurl their own countries into a war against Russia, the U.S. and NATO continue to  designate Ukraine an “enhanced  opportunity partner” — a springboard from which NATO can funnel weapons against Russia and a human shield NATO can hide behind.

Despite the Biden administration’s rhetoric about defending a “free and democratic” Ukraine, the U.S. and NATO have never treated Ukraine as an equal sovereign country but as a pawn. They can use Ukraine’s army as a proxy force for NATO wars enforcing  U.S. imperialist hegemony, even at the cost of tens of thousands of dead Ukrainians.

This is why the war against Russia continues to churn on, despite massive casualties and no significant sustained gains for Ukrainian armed forces. While U.S. weapons manufacturers make a killing (literally) in profits, Zelensky is in the process of selling off Ukraine’s economy to private corporations, slashing labor protections, as well as banning trade unions and the right to collective bargaining in companies with less than 250 employees.

These events show that the only way for Ukraine to be truly free and independent is to break ties with NATO and negotiate for a peaceful resolution with Russia. Until then, the only path available to Ukrainians is to trudge through perpetual war, condemned to fight and die in service of U.S. imperialism.