As we write this editorial, rumors abound that the U.S. military has already moved to seize an airport in Haiti. The developments of the past few months make such a rumor believable.

Yes, believable, but still criminal. It is hard to imagine an intervention more harmful to Haiti’s people. The difficult social conditions now for the people of Haiti were caused by prior U.S. interventions. 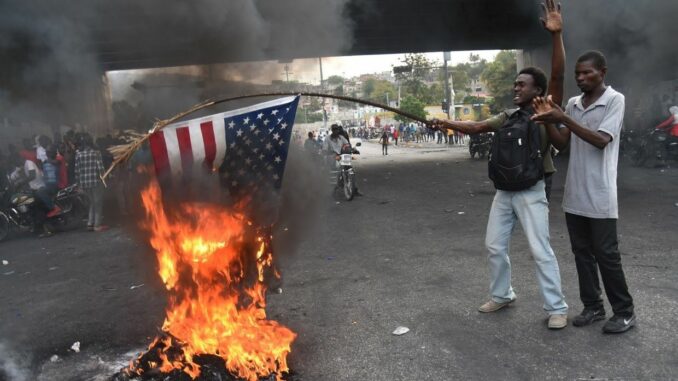 Anger at U.S intervention in the streets of Haiti

Ever since the enslaved African people of Haiti liberated themselves with a heroic revolution that drove out the French colonialist slaveholders in 1804, the rulers of the U.S. and France have made Haitians suffer for this “original sin.”

The Southern slavocrats who dominated the fledgling U.S. in 1804 were terrified that Haiti’s struggle for liberation would spread. They punished Haiti and its people for liberating themselves.

Washington expanded its power, seizing half of Mexico in 1848 and setting the goal of dominating the Western Hemisphere with the Monroe Doctrine as its guide. U.S. military operations marched throughout Central America, while seizing Cuba and Puerto Rico from Spain (and from their people) in 1898.

With U.S.-owned property at stake, in 1915 the imperialist United States sent its military to occupy Haiti. The troops stayed there until 1934 and left Haitians with a despot in power, “Papa Doc” Duvalier, who ruled through the hated and feared “Tonton Macoutes” militia gang. In 1986 a popular revolt finally expelled Duvalier’s son, “Baby Doc.”

In 1990 Haitians overwhelmingly elected Bertrand Aristide president. Aristide’s popular democratic government had just begun to improve life for the Haitian workers and farmers, when officers in Haiti’s army and the Macoutes overthrew him in 1991 with U.S. backing.

When the ensuing regimes failed to stabilize Haiti, the U.S. intervened again in 1994, its troops replaced by United Nations forces in 1995. Aristide was allowed to return under U.S. tutelage. Although his party, Fanmi Lavalas, won seats in parliament, Aristide was kept out of office until he won another election for president in 2000.

When Aristide was unwilling and unable to serve Washington and Wall Street’s interests, a U.S. Special Forces unit — who were allegedly bodyguards for Aristide — seized the Haitian president Feb. 29, 2004, and flew him into forced exile in the Central African Republic.

There followed a succession of U.S. puppet governments, propped up by a U.N. intervention force, which after 2010 managed to introduce cholera while augmenting Haiti’s police. Meanwhile a succession of destructive hurricanes and floods and a devastating earthquake in 2010 further destabilized Haitian society.

Despite Washington’s role in creating turmoil in Haiti, the U.S. has refused permanent political asylum to Haiti’s people, who fled that turmoil.

Workers World supports self-determination for Haiti. It is up to the people of Haiti to determine who runs their country and how they run it. U.S. military intervention may try to protect U.S.-owned property, but it has never brought Haiti prosperity or even stability. U.S. domination is the opposite of self-determination.

Workers World joins the many Haitian popular organizations who are saying Washington needs to keep its hands off Haiti and get its troops out NOW!