Students and community activists working to tackle climate and housing crises put a temporary halt to a major Ivy League football match Oct. 22, drawing the attention of the sports world. 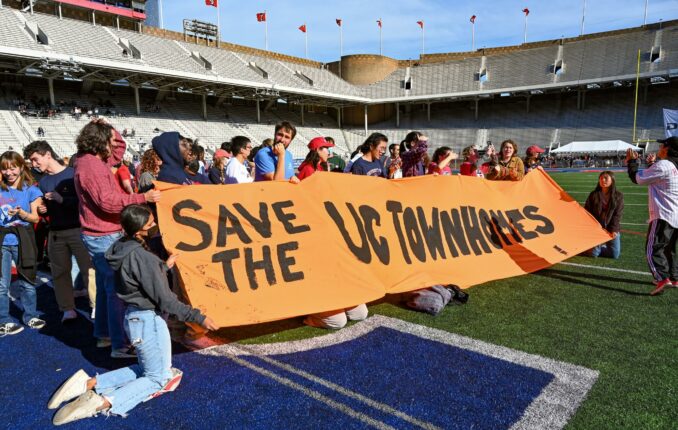 About 70 students, most from the University of Pennsylvania and others from Drexel and Temple universities, and community activists organized by Fossil Free Penn blitzed the UPenn/Yale football game at Franklin Field at the end of homecoming game halftime. They huddled on the blue and red letter “P,” painted in the center of the field, and refused to leave.

The protesters called time-out to the game and displayed their demands in black lettering on three large orange banners to UPenn officials: “DIVEST”; “Pay PILOTs”; and “Save the U.C. Townhomes.”

The student and community protesters demand the university divest its billions in endowment funds from fossil fuel assets. The fossil fuel industry is directly responsible for the crisis of climate change, as well as disseminating false information and funding political corruption. FFP demands UPenn stop new investments in the fossil fuel industry, remove direct and commingled holdings in the top 200 fossil fuel companies within five years, and reinvest a portion of the extricated funds into clean energy assets. 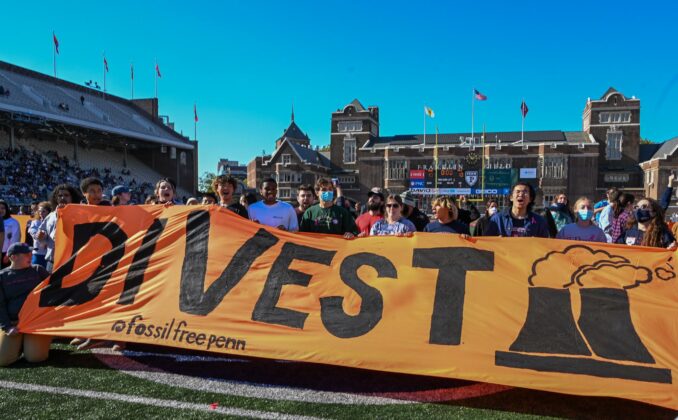 The “Pay PILOTS” (payments in lieu of taxes) demand refers to the fact that “nonprofit” UPenn is the only Ivy League school that doesn’t contribute to its home city through voluntary payment of property taxes. While the University’s roughly $20.7 billion endowment and aggressive building projects have led to massive land accumulation, that property is completely tax-free.

Over $2.5 billion of tax-exempt property in the city is owned by UPenn, according to an Oct. 2, 2019 editorial in The Daily Pennsylvanian, an independent student media organization. Activists want UPenn to pay into an Educational Equity Fund governed by the local school district and the City of Philadelphia.

The “Save UC Townhomes” demand concerns a nearby low-income housing complex, whose residents are threatened with eviction. For 40 years UPenn worked with developers to persistently push Black and Brown Philadelphians out of their neighborhood, then known as the Black Bottom. UC Townhomes was initially built to be affordable housing safe space for those who were originally displaced by university developments in the 1970s and ’80s.

Now UPenn remains noticeably silent, as developers threaten the very same harm as the university did half a century earlier. This is what Black displacement, white supremacy and racial injustice look like. After several eviction dates were postponed due to militant protests, UC Townhomes residents are now facing Dec. 27 evictions.

In unison with the on-field protest, well-organized activists handed out flyers to sports fans in their seats, as their comrades held up two additional orange banners over the second-level railings. On one side of the field, a banner read “We demand justice from Penn,” and on the other, “Which side are you on?”

After 35 minutes, under threat of arrests, most of the demonstrators walked off the field and were escorted out of the stadium. The remaining 19 protesters were handcuffed and taken to a police van 30 minutes later, as their comrades who had left the field converged and chanted slogans until the police vehicle drove away.

The activists then marched to the Police Precinct at 40th and Chestnut, where they blocked the street for hours, rallying, chanting and singing, until all 19 people arrested were eventually released one by one. Each arrestee was charged with “Defiant Trespass.”

FFP members had earlier organized a protest interrupting Penn President Liz Magill’s speech at UPenn’s Aug. 29 convocation for the 2,500 students of the incoming class of 2026. (workers.org/2022/09/66534/) Dissatisfied with UPenn’s lack of response to their demands, FFP held a protest encampment in the middle of UPenn’s campus from Sept. 14 to Oct. 24.

The day after the game disruption, FFP members and allies continued organizing and posting on social media, in support of the 19 arrestees defending themselves from their charges, and put together another protest scheduled for a 4 p.m. Oct. 26 University Council meeting.

FFP has posted a “Why Protest at a Football Game” statement, which concludes: “If the University wants protests to end, the answer is simple: take action. Otherwise, expect resistance.”