The following article is an edited report. Go to internationalwomensalliance.org/ and facebook.com/IWA.grassrootswomenforliberation for more information.

Activists from across Canada met together in Montreal Oct. 14-16 for the International Women’s Alliance (IWA) Canada-wide assembly under the theme “Many Struggles, One Fight / Women: Defenders of Life and Land.” 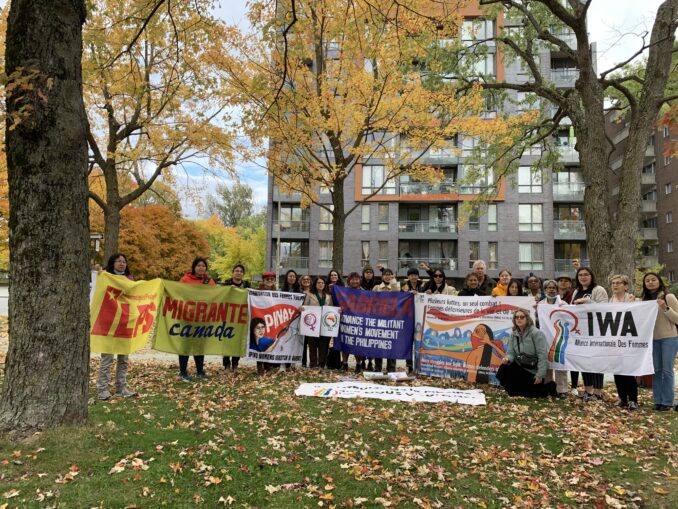 IWA, founded in 2010, is a global alliance of grassroots-based women’s organizers united in building a democratic, anti-imperialist and progressive women’s movement in the 21st century. IWA has nearly 150 member organizations in the world.

On Day 1 of the IWA assembly, we listened to solidarity speeches delivered by women leaders, including Susana Malmierca Benitez (Consul General of Cuba in Montreal). We heard on video from Azra Talat Sayeed (Vice-Chair of the International League of Peoples’ Struggle) and from Coni Ledesma (IWA Europe).

Tess Tesalona and Rita Acosta, who were present at the original founding of IWA in Montreal in 2010, shared their memories and some pictures, followed by Donna Denina, the international Secretary-General of IWA who presented a PowerPoint of the achievements and activities of IWA over the past 12 years.

Marie Boti of Women of Diverse Origins, the organization hosting the assembly and Vice-Chairperson of IWA, set the stage for the workshops with a presentation about “The Canadian situation, Pathways and obstacles to women’s organizing.”

Delegates attended afternoon workshops, focused on some of the challenging issues facing women’s communities, including war and militarism, extractivism, forced migration, organizing in a neoliberal context and violence against women.

Planning for the struggles ahead

Workshop speakers were all seasoned activists with many experiences to share, from Barbara Waldern of Just Peace in Vancouver, to Haitian community advocate Chantal Ismé and Kurdish community advocate Kazhal Hamershid, and Billie Pierre of Nkaka’Pamux Indigenous community in British Columbia.

Other workshop speakers included Rosalinda Hidalgo of the Committee for Human Rights in Latin America; Cynthia Palmeria of Migrante Alberta and Nina Gonzales of the Immigrant Workers’ Centre in Montreal; Merryn Edwards of Women for Rights and Empowerment in Alberta, and Emmanuelle Proulx and Ramatoulaye Diallo of the CSN trade union central in Quebec; Monica Moorehead from Workers World Party in New York; Vicky Zois of the Movement against rape and incest in Montreal, and Maki Cairns of Gabriela BC.

Discussion focused on how women are uniquely impacted by capitalism and imperialism through neoliberal policies, patriarchy, racism and gender oppression. The workshops were effective in understanding the histories of women’s struggles in Canada and all over the world, making connections between these, and building relationships to advance mutual struggles. The day ended with a beautiful and powerful cultural night of dance, song and spoken word.

On Day 2, delegates reviewed the IWA Basis of Unity and heard about IWA’s global campaigns focused on War and Militarism and on Women over Profit.

Thelma Castro and Marie Boti facilitated the reports from each workshop as delegates discussed and adopted a series of resolutions and an action plan to address these issues which a coordinating committee will help implement.

The day ended on the street, with a rally against war and militarism, as part of the Oct. 15-22 week of action called by the United National Antiwar Coalition (UNAC). A march to the symbolic Place du 6 décembre, a square not far from the conference location at the Université de Montréal, was held in memory of the 14 women who were gunned down at the Polytechnic Institute of this University in 1989 by a misogynist man, simply for being women.

United in our struggles and stronger with our shared knowledge and connections, we are ready to continue building the International Women’s Alliance across Canada and around the world! Long live international Solidarity!