Abraham Cruz, an 81-year-old illiterate invalid imprisoned at State Correctional Institute Phoenix in Pennsylvania, was denied commutation on Aug. 3. He will continue his time behind bars, largely based on the recommendation of Board of Pardons member John P. Williams, M.D., psychiatrist. 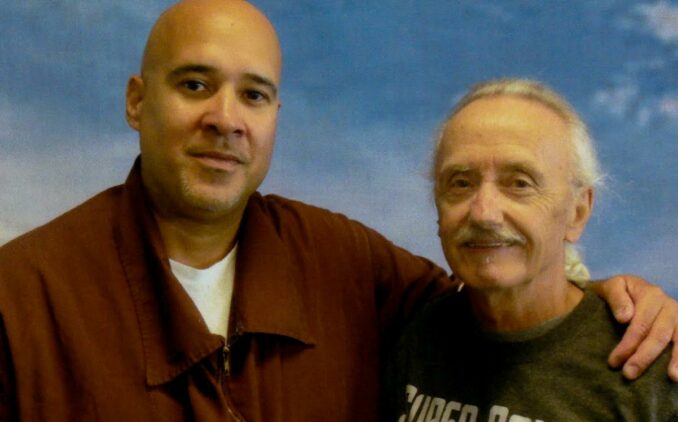 Bryant Arroyo and Joe Piette during visit in 2019.

Because Cruz only speaks Spanish and cannot read, Williams (who doesn’t understand Spanish) based his decision on a verbal interview with Cruz through a translator. Because of the many hurdles he faced, including being required to complete documents and submit tests available only in English, Cruz’s commutation was denied.

At the end of an interview, I had with Bryant Arroyo on Oct. 7, Cruz’s case was held up as an example of “state-sponsored death by regulation” under the Pa. Department of Corrections and the Board of Pardons. Political prisoner Mumia Abu-Jamal calls Arroyo “the world’s first jailhouse environmentalist,” but he is also a skilled jailhouse lawyer.

Arroyo raised Cruz’s case for several reasons. “Even if Cruz could read, no DOC forms or documents are in Spanish,” Arroyo complained. “And as an invalid who poses no threat to society, the whole process was discriminatory and unjust for him as an elder. He should have been released.”

Arroyo has a successful case on his resume, winning the release of an ill and aged incarcerated person — Bradford “Bub” Gamble. He described how hard it was to win Gamble’s release: “On April 15, 2021, I was retaliated against by SCI Frackville officials and transferred to SCI Coal Township and eventually assigned to a cell just four doors down from Mr. Bradford Gamble’s.

“We routinely crossed paths every time Bub would come out of his cell. One day he asked to meet at the table, where I was constantly drafting up grievances and working on my civil and criminal case. He revealed his unfortunate medical condition, which was colon cancer.

“Soon we were on a full campaign to contact attorneys from the Philadelphia Defenders Association, the Pa. Bar Association, Pennsylvania prison society and the Pennsylvania Institutional Law Project. The PILP referred me to former executive director Angus Love, who said he ‘wouldn’t take a losing case.’

“We continued on our legal journey and dogged pursuit, eliminating every viable avenue for an attorney that would represent Bub for compassionate release. As my frustrations escalated, I reached out to Joe Piette, who was finally able to get Abolitionist Law Center attorneys Bret Grose and Rupalee Rashatwar to represent Gamble. He was finally released on March 5 and passed away on Aug. 14, surrounded by his loving family, one of only 33 incarcerated people to win medical release in the last 13 years.” (workers.org/2022/08/66312/)

Senator Lisa Baker and her cronies gutted the former Title 61 Subsection 81, known as Illness of Prison Removal for Treatment Statute, and replaced and renamed it as Compassionate Release under Title 42, Pennsylvania Consolidated Statutes Subsection 9777, put into effect in 2014. It categorically removed the entire jurisdictional aspect and statutory legal authority that formerly gave Pennsylvania state judges the power to humanely provide the necessary medical treatment for both county and state prisoners, void of the bureaucratic red tape. Title 42 created a highly improbable bar to meet the criteria for compassionate release.

Existing in name only, and legally bereft of any right to legal representation for any prisoner that falls into the terminally ill category, this is Pennsylvania state-sponsored secret death by regulation.

There is absolutely nothing compassionate about the current statute. It should compel every taxpaying resident to call up their state senators to make known their objections and to get Senate Bill 835 passed, which would eliminate the bureaucratic red tape for terminally ill prisoners, 55 years and older, who have 25 years or more behind bars. They would become eligible to have a hearing before the Pennsylvania parole board. Given the fact that Governor Wolf’s DOC budget of $45.7 billion could be greatly reduced if elderly and ill people were released back to their communities, this should make economic sense for all taxpayers.

The DOC’s English-only forms and documents and improper verbal test via a translator, which Cruz was obligated to take, were done in the context of the DOC’s troubling policy that classifies Cruz, Arroyo and other Latinx incarcerated people as white. It’s harder to charge racism against white officials if you’re Latinx but mislabeled as white. (See workers.org/2022/09/66832/)

That’s why Arroyo filed Grievance 994894 on Aug. 22, 2022, after he found out he was involuntarily reclassified as white in DOC records.

Arroyo explains, “So basically the Pa. DOC, the Pa. Justice Network and National Crime Information Center eviscerated my entire Latinx heritage by unconstitutionally fabricating and changing my race identity fraudulently and involuntarily by reclassifying me as a white man against my own volition, culture and beliefs. This is an outright violation of the Equal Protection Clause and 14th Amendment of the Constitution, by specifically selecting and discriminating against my inextricable Latinx race and culture.

“And second, according to the NCIC, out of the races that they could have allowed me to choose under federal law, within the Census Bureau would have been these following races: Black, white, Asian, American, Indian and Pacific Islander. And out of all of those, they said the NCIC auto-generated the selection of what race they were going to fit us in.

“They labeled me as white, along with the rest of the Latinx population. I see that as no coincidence; because now, when you look at the statistics between the Blacks and the whites in the prison system, it almost makes it seem like there’s no longer a racial disparity.

“As a result of this change, I’ve experienced different inmates throughout the institution exhibiting a pattern of racial harassment, calling me racial epithets throughout the day by saying, ‘hey, white boy.’ The Pa. DOC, NCIC and the Pa. Justice Network don’t have a problem stripping you of your Latinx race, but they failed to provide you with the white privilege card for the new white race.

“I told my daughter; I have to explain to you that your dad is not who you thought he was. And she was like, ‘What do you mean?’ Well, I’m not Latinx. I’m white. So, she was like, ‘what the f— are you talking about?’ And I said, they changed my race to white, and if you go to Pa. DOC right now and look me up, I’m white; I’m labeled as white.

“This is not only troubling but imposing invasive, intrusive and outright cultural genocide towards the Latinx race. I feel like Malcolm X when he said, ‘I didn’t land on Plymouth Rock, Plymouth Rock landed on me.’ And I believe that I would be remiss not to state that this should compel all Latinx across the entire nation to use #I am my race. My race and ethnicity do not separate; one doesn’t go without the other.”

Next: Wellpath profits cut health care for the incarcerated.