Cleveland and Detroit are among the latest cities to adopt or expand the use of gunfire detection technology, known as “ShotSpotter.” Their city councils voted Oct. 10 (Cleveland) and Oct. 11 (Detroit) to drastically expand use of the technology. Cleveland will increase the area of coverage from 3 to 13 square miles, to the tune of $2.7 million; Detroit’s costs will rise from $1.5 million to $7 million. 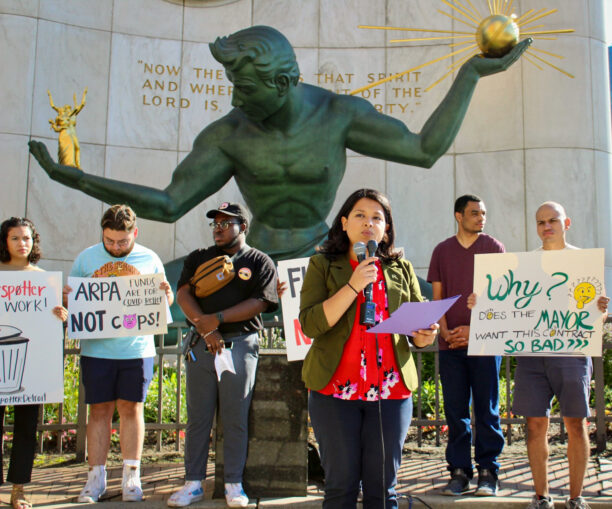 Founded in 1996, the ShotSpotter company claims its systems are in use in roughly 135 cities and 140 educational institutions. Audio sensors are placed on buildings and lampposts, about 25 per square mile. When the sensors pick up the sound of gunfire, police are alerted and dispatched to the location where the noise was heard.

The company says it “brings the power of digital transformation to law enforcement” and touts a “97% respond accuracy.” (shotspotter.com) However, police departments that contract with ShotSpotter agree to withhold pertinent data from the public.

In 2021 the ACLU reported: “A critical report on the ShotSpotter gunshot detection system issued today by the City of Chicago’s Inspector General (IG) is the latest indication of deep problems with the gunshot detection company and its technology, including its methodology, effectiveness, impact on communities of color and relationship with law enforcement. The report questioned the ‘operational value’ of the technology and found that it increases the incidence of stop-and-frisk tactics by police officers in some neighborhoods.” (tinyurl.com/3d68sne6)

Michael Williams was falsely held in the Cook County Jail almost a year after a ShotSpotter alert. Police responding to ShotSpotter killed 13-year-old Adam Toledo in 2020. A lawsuit filed in July seeks to halt its use in Chicago.

Several African American council members spoke against ShotSpotter; the final vote of the committee was four in favor, two opposed and one abstention. However, only one of the 17 council members voted against the spy technology at the full council meeting Oct. 10.

Cleveland Mayor Justin Bibb was a co-sponsor of the ordinance to expand ShotSpotter. The $2.7 million bill will be paid with money taken out of federal COVID-19 relief funds. Apparently, the federal government allows this use of funds, although it obviously will not prevent one single death from COVID-19.

The ShotSpotter company offers help to cities in obtaining federal funds and grant money — this assistance makes it easier to sell local officials on the technology, because the city budget isn’t impacted. The Cleveland pilot program was funded by the Catherine L. and Edward A. Lozick Foundation, run by the billionaire heirs to the Swagelok company fortune, who are major Republican Party donors.

Detroit City Council, which twice postponed the vote, scrapped the use of federal COVID-19 funds but found other funding sources. The Detroit vote was closer than Cleveland’s; only five out of nine council members voted for ShotSpotter.

“Cases from other localities show how the technology can be abused to infringe on citizens’ First Amendment rights; and other localities are abandoning the technology, because it has led to more negative police/community interactions,” said Council member Mary Waters. She was joined by Council President Mary Sheffield and Council members Gabriela Santiago-Romero and Angela Whitfield Calloway. All four no votes came from women of color.

The recent setbacks in Cleveland and Detroit in no way represent the end of the struggle. Many cities, most recently Dayton, Ohio, have dropped ShotSpotter. Voices against this racist use of surveillance technology are growing across the Midwest and beyond.