When Bradford Gamble died, he was surrounded by his family. The 65-year-old had been imprisoned for nearly a lifetime — 46 years — before he learned he was dying of cancer. With the help of activists on both sides of the prison walls, Gamble fought relentlessly to win his freedom. 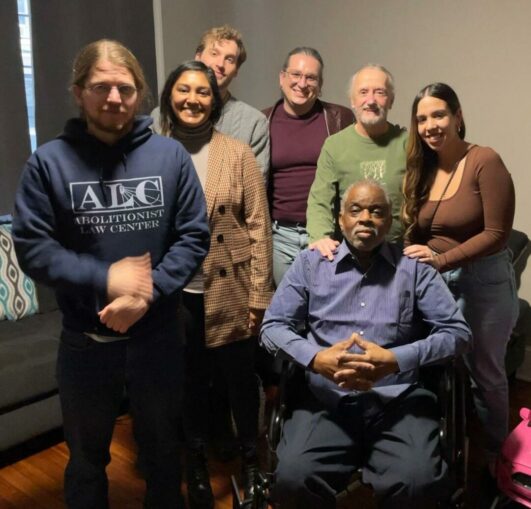 Bradford Gamble with some of the prison abolition supporters who worked for his release, March 13, 2022. (WW Photo Credit: Ted Kelly)

Gamble was one of only 33 people who have successfully petitioned Pennsylvania courts for “compassionate release” in the last 13 years. His friend and tireless supporter Bryant Arroyo, currently still incarcerated at SCI Coal Township, said in April, “He was so adamant about not dying here under these particular circumstances that he was willing to do exactly what he needed to do in order to try to obtain his release.” (spotlightpa.org, April 21)

Only two others have been granted compassionate release since Gamble was released in March. One, Howard White, died only days after he was released from custody to a hospice.

“I didn’t make it out here just to say, I’m home. I got more to do,” Gamble told Workers World when he was released from prison a mere five months ago. “One thing Mr. Arroyo taught me is to never give up. Never stop fighting. If you can’t fight for yourself, fight for somebody else. I always told him, if I make it out of here — and we didn’t know, at that time, we really didn’t know — if I get out, I’m gonna touch somebody’s heart. And I’m gonna put them in a position to touch somebody else’s heart.”

He became an outspoken whistleblower on the conditions inside Pennsylvania’s prison system, particularly regarding the deplorable health care incarcerated people have access to.

“I want you all to know that there are things going on behind closed doors. People like me are not being treated as human beings. We’re being treated like cattle. The DOC medical department is 100% wrong in their way of treating us. We need people to know and understand that.” (Workers World, March 23)

Prison officials failed to notify Gamble what was causing his health to decline during his final years behind bars. Months after a biopsy to confirm whether he had terminal cancer, a prison guard dropped a piece of paper on the floor of his cell and only then did Gamble learn of his diagnosis.

Since his release, Gamble’s story has been raised as an example of why the compassionate release process in Pennsylvania fails to give incarcerated people the basic dignity of living out their final months with their families and communities. He had also become a spokesperson against the shackling of incarcerated people in health care settings.

Bradford Gamble’s legacy lies not only in his triumph of spending the final months of his life surrounded by his loved ones. His legacy is also his struggle, his adamant demand that everyone behind bars is afforded that basic human right as well.

“Life and death are one, as the river and sea is one. So death is no enemy; it is a friend who, when the work of life is done, cuts the cord that binds the human boat to Earth so it can sail on to smoother shores.

“No language can describe a loved one’s worth, and Bub’s was tried and true. He was not called to be with our ancestors until the task he sought was done. When one has completed their mission, nature demands they move on. Thus, Bub joined the ancestors.

“Those who love him will follow his example and continue his fight for human rights. I know, that is the pattern for my life. His example, his dedication will be mirrored by my example and told by me. It would be selfish of us to desire to walk and talk with Bub, again. So, we will honor Bub by carrying on our struggle and letting his strength be an inspiration to us.

“Bub is now one with the creative force. Who can doubt the power of creative force? In the depths of the Earth, it presses coal into diamonds. In the soft belly of the oyster, it changes a grain of sand into a pearl. In the darkness of the cocoon, it turns a caterpillar into a butterfly. Death, too, is but one of nature’s moments of change.

“As the snake shakes off its old skin, we, too, shake off this life to find something new and beautiful. As the winter landscapes hide the springtime flowers just beneath the soil and winter trees hide the promise of new leaves, our grief and deathbed agonies hide the promise of nature’s eternal love. Life has taught us to trust in nature’s divine plan. Like an owl whose night-bound eyes cannot comprehend the mystery of light, wisdom teaches us to be patient with what we cannot comprehend.