The latest U.S.-NATO-Kiev aggressions in the Ukraine war theater — bombing the bridge to Crimea and the Nord Stream 1 and 2 pipelines — have escalated the fighting, threatening a continental or even a worldwide conflagration. 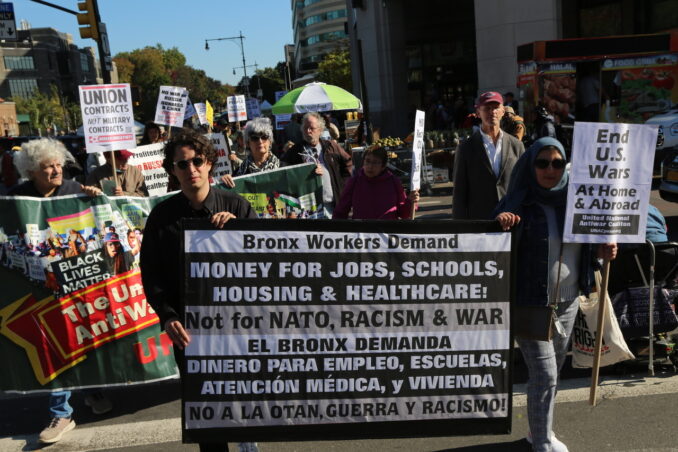 The world’s richest bosses, bankers and billionaires, and their agents in Washington, London, Berlin and Brussels, have imposed the war in Ukraine on the world’s workers.

From the U.S.-incited Maidan coup in 2014, which established a reactionary anti-Russian regime in Kiev to enable NATO’s expansion toward Russia’s borders, the imperialists created an existential threat to Moscow, making war nearly inevitable. (See articles at workers.org/tag/nato, /russia, and /ukraine/)

The war’s victims include the working class in Ukraine and Russia, who are paying in blood; the peoples of the Global South, who are denied normal sources of food; and the workers in Western Europe, who face enormous hikes in fuel and food costs and potential loss of jobs as their industry closes.

U.S. workers face higher prices for food and housing, plus the diversion of government funds from social programs to profits for the military-industrial complex.

Given the price workers pay for the war, anti-imperialists and others organizing for a socialist world must find an opening to organize against the war. In doing so, they must dismantle a serious obstacle.

The U.S. and NATO answered the direct Russian intervention with sanctions and by arming the Kiev regime. The capitalist media monopoly, as dominant as the Pentagon, perpetuated lies, distortions, exaggerations and absurdities, repeated a thousand times over, to shape the discourse.

The billionaire ruling class dominates ideology and imposes its war propaganda on the world. A major goal of this propaganda was to demonize Vladimir Putin, Russia’s president. This started long before the war and tripled after Russia’s intervention.

Putin’s demonization followed the pattern of earlier attacks on any leader Washington targets. To name only a few, Saddam Hussein of Iraq (twice), Moammar Gadhafi of Libya and Slobodan Milosevic of Yugoslavia were all demonized before and during the time the imperialist military bombed and/or invaded their countries, destroying and tearing them apart. U.S. presidents actually did to those countries what Putin is accused of doing in Ukraine.

In much of Asia, Africa and Latin America, the populations treated the imperialist war propaganda as the usual U.S. hypocrisy they had experienced many times before. And during United Nations’ votes to condemn Russia — introduced with the heaviest U.S. pressure — even the governments of dozens of these countries refused to go along, abstaining.

The Big Lie in Europe

In Europe, the corporate media’s Big Lie was that Putin threatened to reestablish a capitalist Russian Empire, with the old borders of the socialist Soviet Union, and even threatened neutral countries in Western Europe. The lie had an impact.

Up until this year, the antiwar movements in Finland and Sweden could mobilize quickly and militantly against joining NATO. Under the avalanche of propaganda, the rulers of those countries were able to apply for NATO membership with only token opposition.

Taking advantage of the initial confusion in the antiwar movement, the German regime doubled its military outlay, shipped weapons to Ukraine and switched from relying on relatively cheap Russian gas to higher-priced fuel — much of it fracked natural gas from the U.S. The German working class paid the price. London — of course — and Rome and Paris increased military outlays and sent weapons to the Kiev regime.

The politicians representing the German, French, Italian and British ruling classes, along with other capitalist politicians in Europe, have decided at this point to protect the class interests of the European bankers and billionaires by accepting the leadership of U.S. imperialism, as they have in nearly every crisis since 1945. The apparent goal of the European ruling class is to hang onto their roles as junior partners in the U.S.-led imperialist gang that exploits the world’s producers.

When some in the German regime appeared to question the wisdom of rejecting long-standing agreements to buy Russian gas, someone blew up the pipelines carrying Russian gas to Germany and closed the question. As a recent Workers World article showed, only the U.S. military had the motive and means to do this — and they had U.S. and British ships near those pipelines at the time. (workers.org/2022/10/66955/)

The challenge for those who oppose imperialist wars is to find a way to break the ideological hold of the ruling class and its dominant media on the working class. An important step is to join the defense of working-class interests to the battle against the war.

While antiwar demonstrations have taken place in many countries, the central country for an outbreak of class struggle has been France (see related article in this issue). Refinery workers, angry that fuel bosses are growing richer while they can’t afford monthly necessities, have struck. French President Emmanuel Macron, while delivering weapons to arm Ukraine, has attempted to cut workers’ pensions and conscript refinery workers to force them to work — breaking their strike. So far this has only spread the strike.

It is outstanding that organizations in France not only helped build the Oct. 18 union protests but joined the working-class struggle with the struggle against imperialist war in Ukraine. A demonstration of 140,000 people in Paris Oct. 16, demanding lower prices and more environmental protection, showed the potential for such a movement.

The antiwar movement in Portugal has called for demonstrations Oct. 26 in Lisbon and Oct. 27 in Porto.

In many protests around the U.S. on Oct. 15-16 against U.S./NATO aggression, slogans highlighted the class interests of the workers and how the war hurts them. At a rally in a neighborhood plaza in New York City’s poorest borough, speakers proclaimed: “Where’s the $60 billion+ for the Bronx?”

While this embryonic international movement has a long way to go, the most conscious revolutionary actors should keep the same message alive that the Russian revolutionary V.I. Lenin taught during World War I and which the French comrades reminded us of: The main enemy is the ruling class of your own country, and the goal is to turn the imperialist war (against the workers) into a war against the ruling class and for socialism.