International progressive rock star and punk-folk musician Billy Bragg joined Starbucks workers on strike outside the first unionized U.S. Starbucks store Oct. 12. Outside the Elmwood Avenue store in Buffalo, New York, he played classic union songs and sent a strong message to the company. Hundreds of people were drawn to the event — the crowd spilled into the streets and occupied Elmwood Ave. for the afternoon. 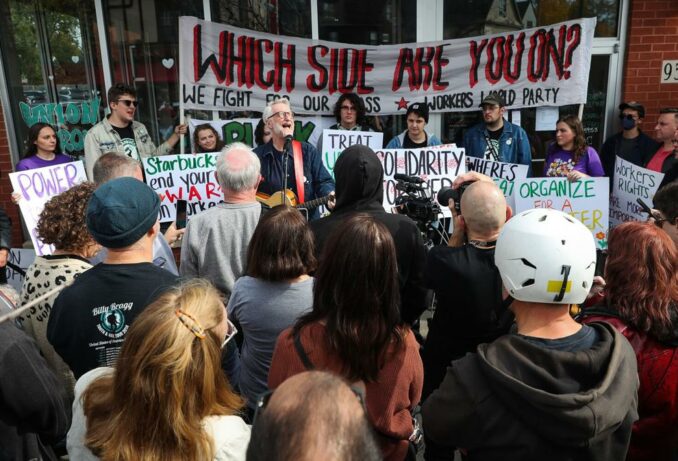 Billy Bragg plays for a crowd of hundreds outside
the first unionized Starbucks in the U.S. (Photo Credit: Joseph Cooke

As Billy set up to play his first song, he told the crowd, “I was thinking what song to play; I’ll start off with, how should I pitch this? Then I saw this banner behind me, and I said, ‘Oh yeah, that’s how I’ll pitch it.’” The banner, from Workers World Party-Buffalo branch, which read “Which side are you on? We fight for our class!” became the backdrop for the demonstration.

The timing was perfect. Starbucks workers on Elmwood Ave. walked out on strike the previous Thursday over continued anti-union repression. Starbucks workers there were recently given retaliatory write-ups for rules that are nominally universal but not enforced at other stores in the district — only at union stores.

This is coupled with mass firings of union supporters, over 120 across the country, with at least 14 workers fired in Buffalo. Workers have won National Labor Relations Board cases against the company; Starbucks has been forced to rehire the seven union organizers fired in Memphis.

On the same day as the show with Billy Bragg, Starbucks was ordered by an NLRB judge to rehire four more fired workers with back pay in Kansas and Missouri, after the company was found guilty in of ramping up its dress code enforcement and sending police to break up picket lines — a tactic also used in Boston and other cities.

While these legal victories have been a morale booster for workers facing the brunt of the repression, Starbucks doesn’t seem deterred by the NLRB. Mass mobilizations like the one at the Elmwood store will be needed on a sustained basis to bring the union busters to their knees.

After the show, Bragg shared a message to Starbucks customers: “I live on coffee — no coffee, no gig. But I am drawing the line today, I’m not going into Starbucks anymore because of the way they’ve been treating their workers all across the country. These people here in Buffalo have started a fire of organizing, a fire of unionization. I want to support that by not buying Starbucks coffee, and I want you to stop buying Starbucks coffee as well . . . in solidarity with Starbucks workers, I draw the line.”

Bragg also recently performed outside a Royal Oak, Michigan, Starbucks in solidarity with workers there who had just filed for a union election.

While the union has not officially called for a boycott, many coffee drinkers are deciding that supporting a company that treats its workers in such a vile way isn’t worth it.

The author is a Starbucks worker in Buffalo, New York, a member of the SBWUOrganizing Committee at their store, and a member of Workers World Party.