Picket signs and bullhorns were enthusiastically put down Oct. 14, as Philadelphia Art Museum workers celebrated a total victory and the agreement of their first union contract, after a 19-day strike. 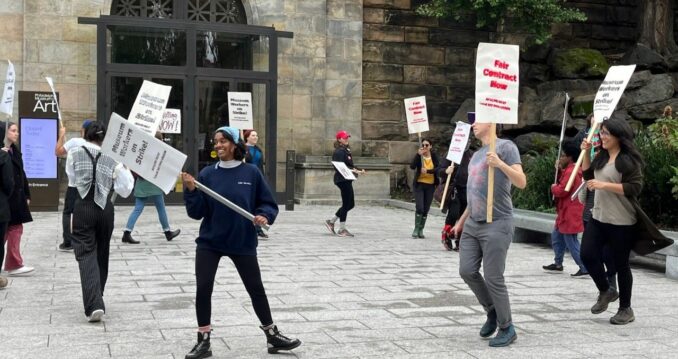 Workers voted to approve the contract Oct. 16. Under the terms of the new agreement, which will expire June 30, 2025, workers won everything they were demanding: a $16.75 minimum wage (up from $15); a 14% across-the-board raise over the course of the three-year union contract, set retroactively to July 1; and full-time employees will receive a $500 longevity bonus ($250 for part-time workers) for every five years they work at the institution. And PMA employees will receive four weeks of paid family leave. What workers currently pay for their high-deductible health care plan will decrease, as the museum will raise its contribution from 90% to 95%.

The victory comes after over two years of fruitless talks, after filing a lengthy Unfair Labor Practice charge against museum management, after a 99% strike authorization vote and after holding a one-day warning strike Sept. 16. Workers finally walked off their jobs Sept. 26.

‘No contract, no Matisse!’

Museum officials finally caved to PMA Union demands one day before workers planned to set up a militant protest Oct. 15, outside a gala celebration prior to the opening of the long-anticipated exhibition of over 100 works by Henri Matisse. Over 3,000 tickets had already been sold for the only U.S. showing of the exhibit, which is set to run Oct. 20 to Jan. 29, 2023. PMA workers were particularly incensed that museum management had brought in scabs from other cities to prepare and set up the valuable works.

Since the 180 museum workers walked out, picket lines were marked by strong participation from area activists, including members of other unions and community groups, the Save UC Townhomes Coalition, and progressive city and state politicians.

Impact on other organizing efforts

Besides making major gains for the renowned museum’s workers, the strike invigorated the local labor movement, as evidenced by participation in the daily picket lines by members of AFSCME, UNITE HERE, Teamsters and many others.

Based on the experience of the PMA Union’s victory, similar solidarity could be easier to garner at a number of area labor and community struggles currently being fought. These include Temple University’s Graduate Students Association (TUGSA), University of the Arts faculty and staff unions, Starbucks Workers United, Amazon workers, Home Depot organizers and UC Townhomes residents fighting eviction.

“This will have a huge impact on the workers at the museum, and I think it will also potentially have ripple effects outward to other cultural institutions,” said Adam Rizzo, President of Philadelphia Museum of Art Union, American Federation of State, County and Municipal Employees Local 397, affiliated with AFSCME District Council 47. (tinyurl.com/bddaac8x)

As one of the oldest and largest art museums in the U.S., with over 240,000 works of art from around the world, the PMA Union’s victory could energize other museum workers across the U.S., where staff at dozens of museums have joined unions in the last three years to fight for higher pay and benefits. Picketing outside museum events, one-day strikes and other worker protests have been held at the Brooklyn Museum of Art, Carnegie International in Pittsburgh, Massachusetts Museum of Contemporary Art, Boston’s Museum of Fine Arts and other cultural institutions.

Lee Saunders, president of AFSCME, with which the museum union is affiliated, released a statement: “This is why cultural workers at museums, libraries and zoos across the country have started a wave of worker organizing that’s taking hold of the industry.” (tinyurl.com/4fvnkv6f)

No matter how renowned the museum might be, workers can’t live off prestige alone.