Hundreds of trans people, family members, friends and supporters joined the 12th Annual Philly Trans March on Oct. 8. They proudly carried signs and banners and through Philadelphia neighborhoods, chanting slogans to demand “a safer and more inclusive environment for everyone.” The rally was organized by members of Philadelphia’s trans, nonbinary, Two-Spirit and gender-variant communities, as well as accomplices, 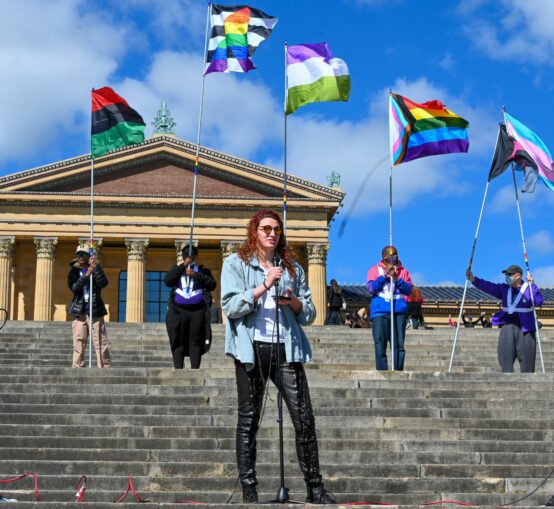 A short rally on the famous Rocky Steps at the Philadelphia Museum of Art highlighted trans youth and athletes as a response to the anti-trans legislation that has been introduced and passed in the U.S. and in Pennsylvania.

Lia Thomas, the first openly trans athlete to win a NCAA Division championship in any sport by winning the 500-yard freestyle in swimming, explained to the crowd the importance of sports to her as she grew up. She said she felt lost as she realized she was transgender, until she came out publicly and was lucky enough to find support from her family, friends and the trans community.

She criticized “state legislators who continue to pass incredibly cruel and transphobic bills that are often only targeted towards trans children, preventing them from competing in their sports with their friends and peers. Depriving them of the opportunity to have sports and to learn and grow is unjust and is very wrong, but I have faith in our community to fight this.” She ended her talk to loud applause, with “Trans equality means equality in all aspects of life, and that includes athletics.”

A march through the Museum, Fairmount and Spring Garden neighborhoods paused at Community College of Philadelphia, Starbucks, the city’s Board of Education, the new Police Headquarters and the Ninth Police Precinct to raise how transgendered people are treated at those institutions.

Circling back to the Rocky Steps, participants heard striking Philadelphia Museum of Art Union member Alexa explain a main reason they have been on strike for two weeks: “The health care plans the PMA offers are already so expensive, they effectively lower our already low salaries. My colleagues are going into debt or are foregoing medical care altogether. The Museum refuses to budge.

“I will say it plainly, any attempt to curtail the accessibility of health care, either through eligibility requirements or costs, is inherently transphobic. It is an attack on trans people. For many of us, medical interventions, including but not limited to hormone replacement therapy and surgery, are literally lifesaving. If we can’t access the care we need, we will suffer and we will die.”